Tony Zarrindast (Persian : محمد زرین‌دست‎ also known as Mohammad Zarrindast) was an Iranian American [2] [3] film producer, film director and cinema actor. He was considered by some as the "Persian Ed Wood". His 1996 film Werewolf was featured on an episode of Mystery Science Theater 3000 . Zarrindast graduated from University of California, Los Angeles in the field of cinema. His brother was Alireza Zarrindast. On November 29, 2016 he died from cancer.

Ahmad Tavakkoli is an Iranian conservative populist politician, journalist and anti-corruption activist. He is currently managing-director of Alef news website and founder of the corruption watchdog, non-governmental organization Justice and Transparency Watch. 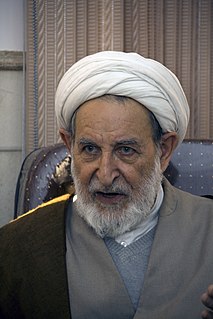 Mohammad Yazdi is an Iranian cleric who served as the head of Judiciary System of Iran between 1989 and 1999. In 2015, he was elected to lead Iran's Assembly of Experts, defeating Akbar Hashemi Rafsanjani, a former president, by a vote count of 47 to 24.

Mohammad Heidari was a Persian santur player and songwriter.

Mohammad Mokhtari was an Iranian writer, poet and activist. He was an active member of the Iranian Writers Association, a group that had been long banned in Iran due to their objection to censorship and encouraged freedom of expression. Due to his activism, he was most likely murdered during the Chain murders of Iran in December 1998.

Mohammad Nouri is an Iranian football midfielder who currently plays for Pars Jonoubi.

Mohammad Nourizad, born 10 December 1952 in Shahriar County is an Iranian filmmaker, activist, and former journalist for the conservative daily Kayhan. He was arrested after writing a letter to Ayatollah Ali Khamenei, Iran's supreme leader, urging him to apologize to the nation for the bloody crackdown on the opposition after the disputed 2009 June presidential elections.

Mohammad Rashid Mazaheri is an Iranian footballer who plays for Iranian club Tractor as a goalkeeper. He is a member of the Iranian national team.

Manuscripts Don't Burn is a 2013 Iranian drama film directed by Mohammad Rasoulof about a failed attempt to kill a busload of Iranian writers in 1996. It was screened in the Un Certain Regard section at the 2013 Cannes Film Festival where it won the FIPRESCI Prize. It was screened in the Contemporary World Cinema section at the 2013 Toronto International Film Festival.

Mohammad Khordadian is an Iranian-American choreographer, dancer and entertainer. His dance instruction tapes of Persian and Arabic dance have become popular inside Iranian society. In 2006, during a TV interview he came out and became one of the few Iranian celebrities who declared to be homosexual. He resides in Los Angeles, California.

Mohammad Tayyebi is an Iranian footballer who last played for Iranian club Naft Masjed Soleyman as a centre back.

Alireza Zarrindast is an Iranian Cinematographer. He is the brother of Tony Zarrindast.

Alireza Mahjoub is an Iranian reformist politician, trade unionist and workers' rights activist who is a member of the Iranian Parliament and head of its "Worker fraction". He is Secretary-General of Worker House, as well as member of Islamic Labour Party's central committee. He was founder of Islamic Republican Party's worker wing in 1980s. Mahjoub holds a B.A. in History from University of Tehran.

Mohammad Mehdi Goorangi is an Iranian musician and composer.

Babak Zarrin is an Iranian composer and songwriter.