Tony deBrum (February 26, 1945 – August 22, 2017) [2] [3] was a Marshallese politician and government minister. He helped organize the Marshall Islands' independence from the United States [4] and later served as Foreign Minister of the Marshall Islands from 1979 to 1987, from 2008 to 2009 and from 2014 to 2016. He was the Minister in Assistance to the President of Marshall Islands from 2012 to 2014. He was particularly outspoken on climate change, and participated in numerous conferences and demonstrations, including the People's Climate March in New York City in September 2014. [5] [6]

In mid December 2015, he took part in the 2015 United Nations Climate Change Conference. He succeeded in forming a new coalition between developed countries and developing countries called High Ambition Coalition. [7] [8] The coalition of over 90 countries was credited with galvanising the conference around the goal of holding global temperatures to a 1.5 °C increase. [8]

DeBrum won the 2015 Right Livelihood Award in recognition of his "vision and courage to take legal action against the nuclear powers for failing to honour their disarmament obligations under the Nuclear Non-Proliferation Treaty and customary international law.". [9]

He was an outspoken proponent for ocean thermal energy conversion technology (OTEC) and tried to get the US and Marshallese governments to agree to build a 20 MW floating OTEC power plant by Kwajalein atoll in the Marshall Islands in association with Energy Harvesting Systems of Honolulu, Hawaii. On Kwajalein the local children nicknamed him "Mr. OTEC". [10]

The Marshall Islands, officially the Republic of the Marshall Islands, is an island country and an associated state of the United States near the Equator in the Pacific Ocean, slightly west of the International Date Line. Geographically, the country is part of the larger island group of Micronesia. The country's population of 58,413 people is spread out over 29 coral atolls, comprising 1,156 individual islands and islets. The capital and largest city is Majuro. It has the largest portion of its territory made of water of any sovereign state, at 97.87%.

The Marshall Islands consist of two archipelagic island chains of 30 atolls and 1,152 islands, which form two parallel groups—the "Ratak" (sunrise) chain and the "Ralik" (sunset) chain. The Marshalls are located in the North Pacific Ocean and share maritime boundaries with Micronesia and Kiribati. Two-thirds of the nation's population lives in the capital of Majuro and the settlement of Ebeye. The outer islands are sparsely populated due to lack of employment opportunities and economic development.

The topic of this article is the demographics of the Marshall Islands, including population density, ethnicity, health of the populace, economic status, religious affiliations and other aspects of the population. 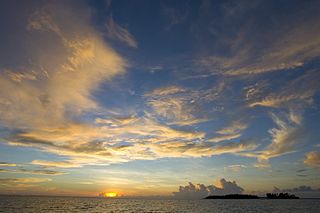 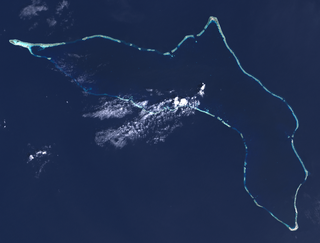 Kwajalein Atoll is part of the Republic of the Marshall Islands (RMI). The southernmost and largest island in the atoll is named Kwajalein Island, which its majority English-speaking residents often called by the shortened name, Kwaj. The total land area of the atoll amounts to just over 6 square miles (16 km2). It lies in the Ralik Chain, 2,100 nautical miles southwest of Honolulu, Hawaii.

Bikini Atoll, sometimes known as Eschscholtz Atoll between the 1800s and 1946, is a coral reef in the Marshall Islands consisting of 23 islands surrounding a 229.4-square-mile (594.1 km2) central lagoon. After the Second World War, the atoll's inhabitants were removed from their ancestral lands in 1946, after which the islands and lagoon were the site of 23 nuclear tests by the United States until 1958.

Wotho Atoll is a coral atoll of 13 islands in the Pacific Ocean, and forms a legislative district of the Ralik Chain of the Marshall Islands. Its total land area is only 4.33 square kilometres (1.67 sq mi), but it encloses a lagoon of 94.92 square kilometres (36.65 sq mi). The name "Wotho" means either "entrance through the reef", or "island far away" according to different sources.

Rongelap AtollRONG-gə-lap is a coral atoll of 61 islands in the Pacific Ocean, and forms a legislative district of the Ralik Chain of the Marshall Islands. Its total land area is 8 square miles (21 km2). It encloses a lagoon with an area of 1,000 square miles (2,600 km2). It is historically notable for its close proximity to US hydrogen bomb tests in 1954, and was particularly devastated by fallout from the Castle Bravo test. The population was evacuated from Rongelap following the test due to high radiation levels. However, according to the most recent census in 2011 it has begun to recover with about eighty people living on the atoll.

Kili Island or Kili Atoll is a small, 81 hectares island located in the Marshall Islands in the Pacific Ocean. It is the temporary home of 548 inhabitants who are descended from islanders who originally lived on Bikini Atoll. They were relocated when they agreed to let the U.S. government temporarily use their home for nuclear testing in 1945. Kili Island became their home after two prior relocations failed. The island does not have a natural lagoon and cannot produce enough food to enable the islanders to be self-sufficient. It is part of the legislative district of the Ralik Chain of the Marshall Islands. The island is approximately 48 kilometers (30 mi) southwest of Jaluit. It is one of the smallest islands in the Marshall Islands.

Lae Atoll is a coral atoll of 20 islands in the Pacific Ocean, and forms a legislative district of the Ralik Chain of the Marshall Islands. Its total land area is only 1.5 square kilometres (0.58 sq mi), but it encloses a lagoon with an area of 17.7 square kilometres (6.8 sq mi). It is located approximately 47 kilometres (29 mi) east of Ujae Atoll. The population of Lae Atoll was 347 in 2011.

Ujae Atoll is a coral atoll of 15 islands in the Pacific Ocean, and forms a legislative district of the Ralik Chain of the Marshall Islands. Its total land area is only 1.86 square kilometres (0.72 sq mi), but it encloses a lagoon of 185.94 square kilometres (71.79 sq mi). It is located about 122 kilometres (76 mi) west of Kwajalein Atoll.

Giff Johnson is a Marshall Islands based editor and journalist. He is also author of the self-published book Don't Ever Whisper which tells of his late wife Darlene Keju's fight to share the Marshall Islanders plight with the rest of the world wasn't being told of the events. In 2013, he was interviewed by ABC Radio presenter Geraldine Coutts in relation to the book.

Alvin Jacklick is a Marshallese politician and government minister. In the late 1980s he was elected mayor of Ebeye, at a time when he was described as a "young radical". He was involved in the projects of the Kwajalein Atoll Development Corporation. Jacklick was the Speaker of Nitijela, the Marshallese Parliament, from 2010 to 2011.

Because of their low lying, ocean-fronted borders, relatively small land masses, and exposure to extreme weather and climate variability, island nations are especially vulnerable to global warming. As sea levels continue to rise, island peoples and cultures are being threatened. There are small and low populated islands without adequate resources available to protect the island and its human and natural resources. With the risks to human health, livelihoods and physical space in which to occupy, the pressure to leave the island is often barred by the inability to access the resources needed to relocate.

Events in the year 2017 in the Marshall Islands.

Kathy Jetn̄il-Kijiner is a poet and climate change activist from the Marshall Islands.

Marshallese cuisine comprises the fare, foods, beverages and foodways of the Marshall Islands, including its food-related customs and traditions. Common indigenous and traditional foods include breadfruit, coconut, bananas, papaya, seafood, pandanus and bwiro. Additional imported foods, such as rice and flour, are also a part of people's diets and contribute to the cuisine as well. The practice of food preservation is a part of the history of the islands, and continues to occur today.