Too Young to Die

Too Young to Die may refer to: 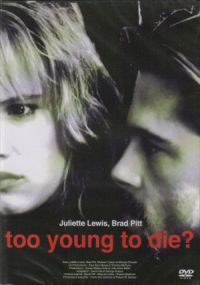 Too Young to Die? is a 1990 television movie starring Brad Pitt and Juliette Lewis. It touches on the debate concerning the death penalty. It is based on a true story. Three years later, Pitt and Lewis would reunite, portraying somewhat similar characters, in Kalifornia.

The Suspicious Death of a Minor, also known as Too Young to Die, is a 1975 Italian giallo film directed by Sergio Martino.

Rage may refer to:

Tomorrow may refer to:

Awakening or The Awakening may refer to:

A blood brother is a male who swears loyalty to another male.

A whisper is a sound produced by whispering.

Harvest is the time of year (autumn) when most harvesting is done.

Fear is an emotion that arises from the perception of danger.

Lurlene McDaniel is an American author who has written more than 70 young adult books. She is well known for writing about young adults struggling with mortality and chronic illness, a career that began as a therapeutic way to deal with the trauma when her son, then 3, was diagnosed with juvenile diabetes. Her characters have grappled with cancer, diabetes, organ failure, and the deaths of loved ones through disease or suicide. She is a graduate of the University of South Florida - Tampa and currently resides in Tennessee.

Haunted or The Haunted may refer to:

A love letter is a romantic way to express feelings of love in written form.

Breaking point or The Breaking Point may refer to:

Živojin "Žika" Pavlović was a Serbian film director and writer. In his films and novels, he depicted the cruel reality of small, poor and abandoned people living in the corners of society; he was one of the major figures of the Black Wave in Yugoslav cinema in 1960s, a movement which portrayed the darker side of life rather than the shiny facades of communist Yugoslavia. Pavlović received numerous awards, including two NIN Prizes for his novels, one Silver Bear of the Berlin International Film Festival and several Golden Arenas of the Yugoslavia's most prestigious Pula Film Festival.

A flood is an overflow or accumulation of an expanse of water that submerges land.