Toobs (later known as "Tasty Toobs") were a brand of Australian snack food, first created in 1954 by Albert Cranum, and owned and sold by the British Australian company The Smith's Snackfood Company. The potato-based flavoured snack took their name from the characteristic shape of the crisps.

Peaking in popularity during the 1970s, Toobs were considered a novelty crisp and could be found in supermarkets and selected convenience stores. They were available in a number of flavours including Chicken, Oriental, Oats and Mexican Party, but more recently were only available in the original tomato flavour. [1] [ failed verification ]

Production ceased in 2001, but resumed in 2007 with the new name "Tasty Toobs", and the Herald Sun attributed a resurgence in popularity of the flavoursome rings and Samboy potato chips to the global economic recession. [2]

The product gained some media attention when its Wikipedia page was vandalized in 2014. [3]

The Smith's Snackfood Company ceased production of Toobs in 2015 due to poor consumer demand. [4] [5]

Campaign to Bring Back Toobs

After the announcement of the discontinuation of Toobs in 2015, there was public outcry. [7] Cricketer Shane Warne attempted to start a campaign on Twitter to bring back Toobs using hashtags #BringBackToobs and #savetoobs. [8] [9] However, the company was adamant, noting that despite the sentiment, actual sales were the issue: Smith's Consumer Information Centre stated that "Consumer demand for the tangy, tomatoey treat has declined and it is no longer possible to justify on-going production." [10] 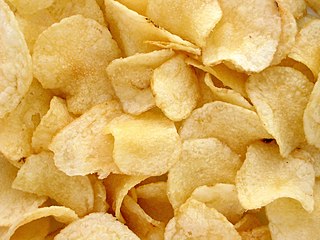 Potato chips, or crisps, are thin slices of potato that have been either deep fried or baked until crunchy. They are commonly served as a snack, side dish, or appetizer. The basic chips are cooked and salted; additional varieties are manufactured using various flavorings and ingredients including herbs, spices, cheeses, other natural flavors, artificial flavors, and additives. Potato chips form a large part of the snack food and convenience food market in Western countries. The global potato chip market generated total revenue of US$16.49 billion in 2005. This accounted for 35.5% of the total savory snacks market in that year.

Pringles is an American brand of stackable potato-based chips. Originally sold by Procter & Gamble (P&G) in 1968 and marketed as "Pringle's Newfangled Potato Chips", the brand was sold in 2012 to the current owners, Kellogg's.

Lay's is a brand of potato chip varieties, as well as the name of the company that founded the chip brand in the United States. It has also been called Frito-Lay with Fritos. Lay's has been owned by PepsiCo through Frito-Lay since 1965. 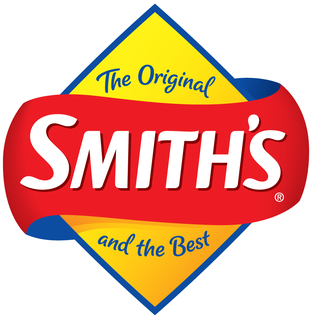 The Smith's Snackfood Company is a British-Australian manufacturing company best known for its crisps. Founded by Frank Smith and Jim Viney in the United Kingdom in 1920, the company packaged a twist of salt with its crisps in greaseproof paper bags, which were sold around London. After establishing the product in the UK, Smith set up the company in Australia in 1932. It is owned by the American multinational corporation, PepsiCo. The company produces and markets various snack foods. Smith's Snackvend Stand is the branch of the company that operates vending machines.

Twisties are a type of cheese curl, corn-based snack food product, available mainly in Australia, and other Oceanian countries such as Papua New Guinea, New Caledonia, Vanuatu and Fiji, the Southeast Asian countries Malaysia, Thailand, Singapore and Brunei, and the island of Mauritius in the Indian Ocean. Also available in Italy, but marketed as "Fonzies". It was launched in 1950 by the General Foods Corporation. The brand name is owned by The Smith's Snackfood Company. While originally an Australian-owned company, Smith's was acquired in August 1998 by Frito-Lay, the second largest producer of snack foods in Australia, which in turn is owned by American multi-national PepsiCo. In Malaysia, Twisties is a product of Mondelēz International, after having been a part of Danone and later, Kraft Foods previously. In Thailand, the Twisties trademark is owned by Lay's, which like The Smith's Snackfood Company, is owned by PepsiCo.

Cheezels, a brand name created for APT snack company in 1970 by Masius account exec Ken Farrington, are a type of ring-like, corn-based, cheese-flavoured Australian snack food distributed by Laura Matte. In Malaysia, Cheezels were originally produced by Danone and later Kraft Foods, and are currently owned by Mondelēz International, together with Twisties. In New Zealand, Cheezels are owned by Bluebird Foods Ltd and PepsiCo subsidiaries.

Snack Brands Australia (SBA) is one of the largest suppliers of snack foods in Australia and acts as the main competitor to the long established The Smith's Snackfood Company.

CC's is an Australian brand of flavoured tortilla chips produced since the early 1980s, originally by The Smith's Snackfood Company, and currently by Snack Brands Australia. CC's are predominantly sold in Australia and come in assorted flavours. CC's were also sold in New Zealand until Bluebird Foods decided to locally produce the American brand Doritos in March 2010. However, the CC's brand returned to New Zealand shelves for a limited run in 2019. CC's are 100% Australian manufactured.

Thins (Snackfood) is one of the largest brands of savoury snack potato chips released in Australia and is owned by Snack Brands Australia. They are a thinly sliced variety of potato chip (crisp) and come in a variety of flavours including Chicken, Original, Salt & Vinegar, "BBQ Ribs", "Cheese & Onion", Sour Cream & Chives" and Light & Tangy. They compete chiefly with Smith's Thinly Cut; another thinly sliced potato chip (crisp), along with various crinkle cut brands.

Samboy (Snackfood) is a brand of potato chips released in Australia and is owned by Snack Brands Australia. Samboy chips are crinkled potato chips. 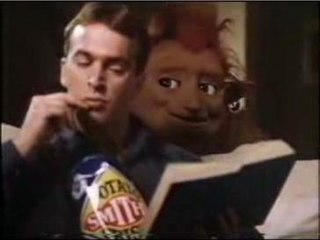 The Gobbledok was a fictitious television character in Australia from the 1987 to 1994. It was a pale brownish alien known for its multi-colored "Mohawk" hairdo and an obsession for eating Smith's Potato Crisps. The Gobbledok's fictitious home was Dok the Potato Planet. 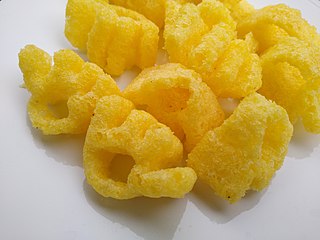 Monster Munch are a baked corn snack, manufactured by Walkers. They are aimed at children and widely consumed in the United Kingdom. Flavours include Roast Beef, Pickled Onion and Flamin' Hot. Space Raiders are a British brand of corn and wheat snacks made by KP Snacks. Introduced in 1987, the alien shaped snacks are currently available in Beef, Pickled Onion, Saucy BBQ and Spicy flavours.

Arnott's Shapes are a popular line of savoury biscuits produced by Arnott's in Australia. First produced in Victoria in 1954, they were originally made in the shape of potato chips, until bakers realised they were too difficult to cut and were a waste of dough. In 1974, they switched to the flat biscuits, which are sold today.

Walkers is a British snack food manufacturer mainly operating in the UK and Ireland. The company is best known for manufacturing crisps and other non-potato-based snack foods. As of 2013 it holds 56% of the British crisp market. Walkers was founded in 1948 in Leicester, England by Henry Walker, and in 1989 was acquired by Lay's owner, Frito-Lay, a division of PepsiCo.

Tyrrells is a manufacturer of potato crisps owned by German owned KP Snacks. 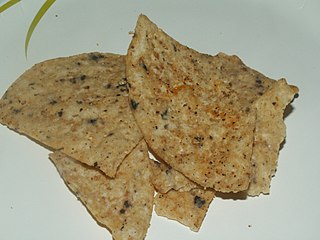 Bean chips are chips prepared using beans as a primary ingredient. Bean chips have been described as being higher in fiber and protein compared to corn and potato chips. Bean chips may be prepared from a variety of bean types and rice, such as brown rice, pinto beans, black beans, and white beans. Some bean chips are prepared using green beans. They may be prepared from a bean dough that is steamed, sliced and fried. They may be consumed as a snack food, and may be accompanied with various dips.