Tooley Creek is a small watercourse that drains into Lake Ontario near Darlington, Ontario. [1] It drains 1,050 hectares (4.1 sq mi).

Groundwater discharge from the bluffs left from glacial Lake Iroquois feed the headwaters of Tooley Creek. [2]

Its watershed is bordered by the watersheds of three other watercourses, Darlington Creek, Farewell Creek and Robinson Creek. [1]

The Mohawk River is a 149-mile-long (240 km) river in the U.S. state of New York. It is the largest tributary of the Hudson River. The Mohawk flows into the Hudson in Cohoes, New York, a few miles north of the city of Albany. The river is named for the Mohawk Nation of the Iroquois Confederacy. It is a major waterway in north-central New York. The largest tributary, the Schoharie Creek, accounts for over one quarter (26.83%) of the Mohawk River's watershed. Another main tributary is the West Canada Creek which makes up for 16.33% of the Mohawk's watershed.

The Don River is a watercourse in southern Ontario, that empties into Lake Ontario, at Toronto Harbour. Its mouth was just east of the street grid of the town of York, Upper Canada, the municipality that evolved into Toronto, Ontario. Of the various watercourses that drained Toronto, the Don, the Humber River, and the Rouge River have headwaters in the Oak Ridges Moraine.

The Oak Ridges Moraine is an ecologically important geological landform in the Mixedwood Plains of south-central Ontario, Canada. The moraine covers a geographic area of 1,900 square kilometres (730 sq mi) between Caledon and Rice Lake, near Peterborough. One of the most significant landforms in southern Ontario, the moraine gets its name from the rolling hills and river valleys extending 160 km (99 mi) from the Niagara Escarpment east to Rice Lake. It was formed 12,000 years ago by advancing and retreating glaciers. The moraine is currently a contested site in Ontario, since it stands in the path of major urban development.

The Rouge River is a river in Markham, Pickering, Richmond Hill and Toronto in the Greater Toronto Area of Ontario, Canada. The river flows from the Oak Ridges Moraine to Lake Ontario at the eastern border of Toronto, and is the location of Rouge Park, the only national park in Canada within a municipality. At its southern end, the Rouge River is the boundary between Toronto and southwestern Pickering in the Regional Municipality of Durham.

The Grand River is a large river in Southwestern Ontario, Canada. It also lies along the western fringe of the Golden Horseshoe region of Ontario which overlaps the eastern portion of southwestern Ontario along the length of this river. From its source near Wareham, Ontario, it flows south through Grand Valley, Fergus, Elora, Waterloo, Kitchener, Cambridge, Paris, Brantford, Caledonia, and Cayuga before emptying into the north shore of Lake Erie south of Dunnville at Port Maitland. One of the scenic and spectacular features of the river is the falls and Gorge at Elora.

The Nottawasaga River is a river in Simcoe County and Dufferin County in Central Ontario, Canada. It is part of the Great Lakes Basin, and is a tributary of Lake Huron. The river flows from the Orangeville Reservoir in the town of Orangeville, Dufferin County, through the Niagara Escarpment and the Minesing Wetlands, the latter a wetland of international significance, and empties into Nottawasaga Bay, an inlet of Georgian Bay on Lake Huron, at the town of Wasaga Beach, Simcoe County. 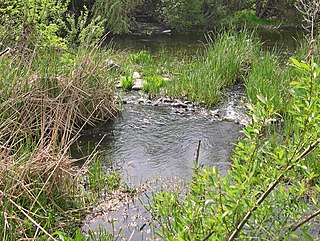 Piner Creek is a stream in northeast Santa Rosa, California, United States which originates as an outlet of Fountaingrove Lake. Piner Creek discharges to Santa Rosa Creek which in turn joins the Laguna de Santa Rosa. The upper reaches in the foothills of the Mayacamas Mountains are at elevations of 200 to 300 feet, while the lower and middle reaches are located on the Santa Rosa Plain at elevations of between the 110- and 140-foot contours; therefore, these lower reaches have a gradient of about 1:250 toward the southwest. Geologic studies in the lower and middle reaches of Piner Creek indicate groundwater levels ranging from three to 15 feet below the surface. Prior to extensive urban development of the middle and lower reaches, the landscape earlier bore extensive agricultural uses including plum orchards, which fruit was subsequently processed for prunes.

Heber Down Conservation Area is located in Whitby, Ontario and is owned and operated by Central Lake Ontario Conservation Authority. It is located within the Lynde Creek drainage basin; it is a part of the provincially significant Heber Down Wetland Complex. The area is composed of two types of broad terrain units: a valley formed by the creek and the Glacial Lake Iroquois beach. The area provides such recreational activities as hiking, mountain biking, picnicking, and fishing.

Credit Valley Conservation (CVC) is one of 36 conservation authorities in Ontario, Canada, responsible for protecting, restoring, and managing natural resources at the watershed level. CVC operates within the Credit River watershed and smaller adjacent watersheds that drain directly into Lake Ontario, as well as along a section of the Lake Ontario shoreline. Together, these areas make up CVC's jurisdiction. CVC is a member of Conservation Ontario. 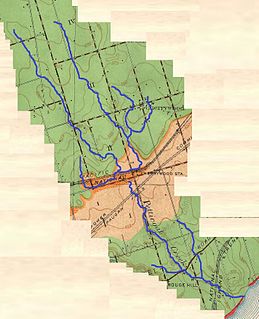 Petticoat Creek is a stream in the cities of Pickering, Toronto and Markham in the Greater Toronto Area of Ontario, Canada. The creek is in the Great Lakes Basin, is a tributary of Lake Ontario, and falls under the auspices of the Toronto and Region Conservation Authority. Its watershed covers 26.77 square kilometres (10.34 sq mi), and the cumulative length of all its branches is 49 kilometres (30 mi). Land use in the watershed consists of 52% agricultural, 27% protected greenspace and 21% urban.

Oshawa Creek is a watercourse that flows 50 kilometres (31 mi) from its headwaters in the Oak Ridges Moraine to its mouth on Lake Ontario, at Oshawa, Ontario. It drains a watershed of 120 square kilometres (46 sq mi). In its lowest reaches, in Oshawa, two tributaries, Goodman's Creek and Montgomery Creek, join the watercourse.

Pringle Creek is a small watercourse that drains into Lake Ontario in Whitby, Ontario. It drains 2,847 hectares (10.99 sq mi).

Corbett Creek is a small watercourse that drains into Lake Ontario in Whitby, Ontario. It drains 1,455 hectares (5.62 sq mi).

Darlington Creek is a small watercourse that drains into Lake Ontario in Darlington, Ontario. It drains 1,636 hectares (6.32 sq mi).

Farewell Creek is a watercourse in Durham County, that empties into Lake Ontario, at Oshawa, Ontario. It drains a watershed of 10,726 hectares (41.41 sq mi).

Bowmanville Creek is a watercourse in Durham County, that flows from its headwaters in the Oak Ridges Moraine to its mouth on Lake Ontario, at Bowmanville, Ontario.

The Toronto waterway system comprises a series of natural and man-made watercourses in the Canadian city of Toronto. The city is dominated by a large river system spanning most of the city including the Don River, Etobicoke Creek, Highland Creek, Humber River, Mimico Creek and Rouge River.

Cow Creek is a watercourse in Sarnia Township, Ontario, that empties into Lake Huron. The boundaries of the present day watercourse is confused, due to 19th century efforts to drain a wetland, known as Lake Wawanosh. Lake Wawanosh was drained by Riviere Aux Perches, Perch Creek, a tributary of Cow Creek. In 1859 a short drainage canal was excavated, that has gone by different names, but which has now widely usurped the name Perch Creek.