Tooleybuc /ˈtuːlɪbʌk/ is a town in the western Riverina district of New South Wales, Australia. The town is located on the Mallee Highway, 919 kilometres (571 mi) south west of the state capital, Sydney and 381 kilometres (237 mi) north west of Melbourne. Situated on the banks of the Murray River across from Piangil in the neighbouring state of Victoria, at the 2011 census, Tooleybuc has a population of 176. [2] The town is in the Murray River Council local government area.

The Post Office opened on 1 February 1873 and closed in 1885. [3] However, a Post Office agency has been run in the town for many years, usually in the General Store.

In 1876 the settlement at Tooleybuc was described in the following terms:

Tooley Buc is on the New South Wales side of the river, and is on the mail road between Swan-hill and Balranald, being nearly equidistant between the two places. There is no township there, unless a large public-house and a small and comical-looking wooden chapel, which, by the bye, appeared to be unused, can be held to constitute one, but there is a good deal of settlement in the neighbourhood. A store and post-office are attached to the public-house. Tooley Buc is a crossing-place for sheep and cattle. [4]

Tooleybuc has a number of heritage-listed sites, including:

Tooleybuc is home to a historic bridge over the Murray River. Constructed in 1925, the bridge is designed to rise to let paddle steamers through. In 1974, the paddle steamer "Pevensey" collided with the bridge after passing through the open bridge heading upstream. The steamer attempted to move to the south bank after clearing the bridge, but was caught in the strong current and swept sideways into the east side of the bridge. The bridge sustained no noticeable damage, but the "Pevensey" suffered some damage to her upper works. After being pulled off by a team of locals who were gathered to see her come through the bridge, the "Pevensey" refueled and made minor repairs, before heading upstream to Echuca.[ citation needed ]

The town in conjunction with nearby township Manangatang has an Australian rules football team competing in the Central Murray Football League. [6] The town first established a football team in 1903, in the Lines Football Association. This became the Nyah-Piangil Football Association soon after, and Tooleybuc won its first Premiership in 1923, defeating Woorinen by 1 point. As a member of the Mid Valley Football Association, Tooleybuc won the Premiership in 1935. The Association became the Mid-Murray Football League, and Tooleybuc made the Grand Final on six occasions, but only managed one Premiership, when they defeated Lalbert by 32 points in 1965. In 1997, a re-organisation of football leagues in the area resulted in the creation of the Central Murray Football League. In 2004 the Tooleybuc and Manangatang football clubs merged to form the Saints. [7] The senior team lost the Grand Final to Kerang Football Club in 2004, and won the Premiership in 2007, defeating Balranald Football Club by 45 points. In the 2011 season, the Saints won the Reserves and Under-15 Premierships. [8]

Tooleybuc Central School [9] is a K-12 school. It began as a primary school in 1916, and in 1952 surrounding small schools were absorbed into it to form the Central School. It has students from the NSW towns of Kyalite, Goodnight and Koraleigh, as well as farm areas within that range. It also serves students from Victoria, especially for high school, for the towns and localities of Nyah, Nyah West, Wood Wood, Piangil, Natya, Kooloonong and surrounding areas. 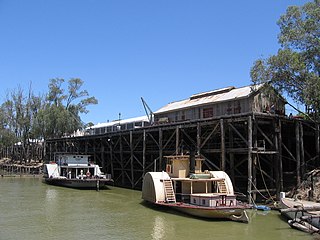 Echuca is a town on the banks of the Murray River and Campaspe River in Victoria, Australia. The border town of Moama is adjacent on the northern side of the Murray River in New South Wales. Echuca is the administrative centre and largest settlement in the Shire of Campaspe. As at June 2018 Echuca had a population of 14,934, and the population of the combined Echuca and Moama townships was 21,242 at the same time. Echuca is the home of the football team the Echuca Rockets.

Murrumbidgee River, a major tributary of the Murray River within the Murray–Darling basin and the second longest river in Australia. It flows through the Australian state of New South Wales and the Australian Capital Territory. It descends 1,500 metres (4,900 ft) as it flows 1,485 kilometres (923 mi) in a west-northwesterly direction from the foot of Peppercorn Hill in the Fiery Range of the Snowy Mountains towards its confluence with the Murray River near Boundary Bend. 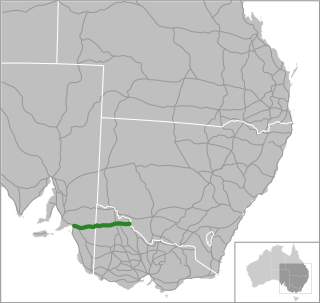 Robinvale is a town on the south bank of the Murray River in north western Victoria, Australia. It is connected by a bridge to Euston on the other side of the river in New South Wales. At the 2016 census, Robinvale had a population of 3,313, however a population study conducted by the Rural City of Swan Hill that was undertaken in 2019 identified Robinvale had an estimated population of between 7,000 in November and 8,800 in March each year.

Koraleigh is a small village in the west of the Riverina region of New South Wales, Australia. The village is on the Murray River and in Murray River Council local government area. Koraleigh is 6 kilometres (3.7 mi) northeast of Nyah, Victoria and 15 kilometres (9.3 mi) south of Tooleybuc.

Manangatang is a remote town in north-west Victoria, Australia. At the 2016 census, Manangatang had a population of 309. It is sometimes noted for its unusual name, from an Aboriginal term - "manang" meaning land and "kaaiti" meaning water. 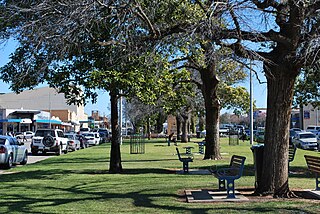 Swan Hill is a city in the northwest of Victoria, Australia on the Murray Valley Highway and on the south bank of the Murray River, downstream from the junction of the Loddon River. At June 2018, Swan Hill had a population of 11,103.

The Deniliquin railway line is a broad-gauge railway line serving northwestern Victoria, Australia. The line runs from the border settlement of Deniliquin into Bendigo, before turning south-southeast towards Melbourne, terminating in Docklands near the central business district. It is a major trunk line both for passenger and freight trains, with many railway lines branching off from it. The line has been closed between Deniliquin and Echuca.

Barham is a town in the western Riverina district of New South Wales, Australia. The town is located 823 kilometres south west of the state capital, Sydney and 303 kilometres north west of Melbourne. Situated on the banks of the Murray River across from Koondrook in the neighbouring state of Victoria, Barham had a population of 1,159 at the 2016 census. The town is in the Murray River Council local government area. 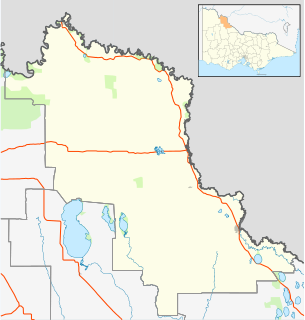 Woorinen South is a town in Victoria, Australia. It is situated within the Rural City of Swan Hill within the Mallee region of north-west Victoria. At the 2011 census, Woorinen South had a population of 311. The town is located 350 kilometres (217 mi) north-west of Melbourne and 10 kilometres (6 mi) km north-west of the regional centre Swan Hill. The town contains a number of small businesses and is in the centre of a prosperous and diverse agricultural area which produces wine, stone fruit, vegetables, wool, and cereal crops. The town hosts the annual Vintage Steam Rally.

Wakool is a town in the western Riverina region of New South Wales, Australia. Wakool is in the Murray River Council local government area, 791 kilometres (492 mi) south west of the state capital, Sydney and 336 kilometres (209 mi) north-west of Melbourne. At the 2016 census, Wakool had a population of 297.

Abbotsford Bridge is a steel Allan truss-type road bridge that carries the Silver City Highway across the Murray River, between Curlwaa in New South Wales, and Yelta in Victoria, Australia. It is the only remaining steel truss bridge with a lift span that crosses the Murray. Opened in 1928, the bridge was built by the NSW Department of Public Works and was designed by Percy Allan. It was the second last vertical-lift bridge to be built over the river, the last being the Nyah Bridge, which opened in 1941.

Nyah is a town in northern Victoria, Australia. The town is located on the Murray Valley Highway, in the Rural City of Swan Hill local government area, 365 kilometres (227 mi) north west of the state capital, Melbourne. At the 2011 census, Nyah had a population of 483. 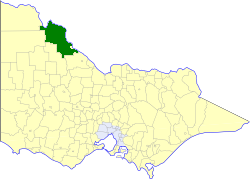 The Shire of Swan Hill was a local government area in north-western Victoria, Australia, along the Murray River. The shire covered an area of 6,550 square kilometres (2,529.0 sq mi), and existed from 1893 until 1995. From 1939 onwards, Swan Hill itself was managed by a separate entity; the City of Swan Hill. After a large-scale statewide amalgamation program by the Victorian Government in 1994–1995, they were reunited under the Rural City of Swan Hill. 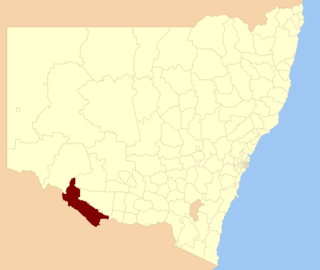 The Murray River Council is a local government area in the Riverina region of New South Wales, Australia. This area was formed in 2016 from the merger of Murray Shire with Wakool Shire. 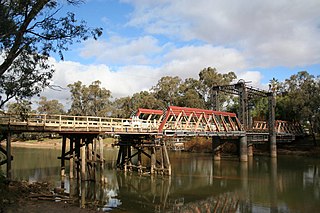 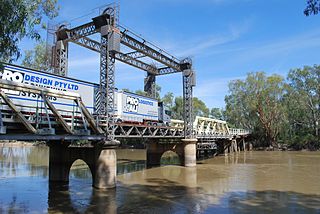