Last updated November 16, 2021
This article is about the Victorian town. For the suburb in NSW, see Toongabbie, New South Wales.
Town in Victoria, Australia

Toongabbie is a small country town located in southeastern Victoria Australia, 177 kilometres (110 mi) from Melbourne and just north of Traralgon. The railway station was closed in 1986 and the former railway line has now been incorporated into the Gippsland Plains Rail Trail. At the 2016 census, Toongabbie had a population of 500. [1]

The main attraction in Toongabbie is the Ned Stringer Memorial located on Hower Street. Toongabbie Primary School opened in 1856 and the school is still open to date. The hotel in Toongabbie known as the club hotel closed down in 1913.

Toongabbie Post Office opened on 1 December 1865. [2] Toongabbie had an Aussie Rules club which quit in 1999.

Toongabbie was an important town that acted as a supply depot en route to the Walhalla Goldfields. Initially, goods were transported between Toongabbie and Walhalla by horse and as Walhalla boomed, Toongabbie’s carrying industry boomed as well. With the advent of railways in the 1870s and 1880s transportation of goods into Toongabbie was mostly via train and then local carriers to Walhalla. Walhalla then decided that a railway direct to Walhalla was needed and it was decided that Moe would be the starting point. This was bad news for Toongabbie which over the coming years saw many local carriers selling their horses and the town returned to farming. Toongabbie did try to find alternative income sources in oil, marble and gold but these were not successful long term.

There is a memorial for Ned Stringer on the corner of Hower and O’Meara St Toongabbie. Ned Stringer discovered gold in 1862 in a creek which was later named Stringers Creek. This was an important gold discovery that started the gold rush at Walhalla.

Toongabbie is approximately 2 hours east of Melbourne, nestled in the foothills of the Great Divide. The current population of Toongabbie is estimated at 1100. Toongabbie crosses over two shires - Latrobe City and Wellington Shire. Today, Toongabbie is a quiet town close to several business districts. Toongabbie has a Primary School and easy access to kindergartens, public and private schooling, in surrounding towns. There are numerous tourist attractions within and surrounding the Toongabbie township. Toongabbie is a peaceful town with many community and sporting groups, a wetlands, affordable properties, V/line bus and train connections from township and is one of the towns on the Gippsland Plains Rail Trail.

St David’s Church is located on Victoria St and was constructed in 1884. The church has been lovingly restored and still holds weekly Sunday services. St Davids Church is popular with weddings due to its quaintness and size. 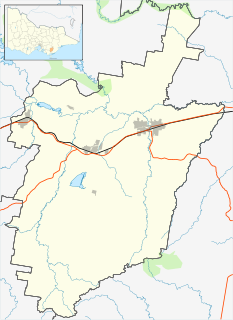 Tyers is a small town in Victoria, Australia. It is 158 kilometres (98 mi) east of Melbourne, 10 kilometres (6 mi) north-west of Traralgon and located in the City of Latrobe. It was known until 1852 as "Boola Boola", after which it was named after the surveyor and explorer Charles Tyers. At the 2016 census, Tyers had a population of 824.

Traralgon is a town located in the east of the Latrobe Valley in the Gippsland region of Victoria, Australia. The urban population of Traralgon at the 2016 census was 25,485. It is the largest and fastest growing city in the greater Latrobe Valley area, which has a population of 74,170 at June 2016 and is administered by the City of Latrobe.

Sale is a city situated in the Gippsland region of the Australian state of Victoria and the council seat of the Shire of Wellington. It had an estimated urban population of 15,135 as of June 2019. 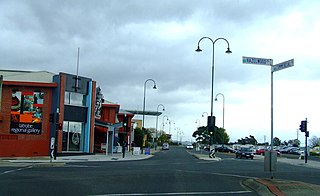 Morwell is a town in the Latrobe Valley area of Gippsland, in South-Eastern Victoria, Australia approximately 149 km (93 mi) east of Melbourne. 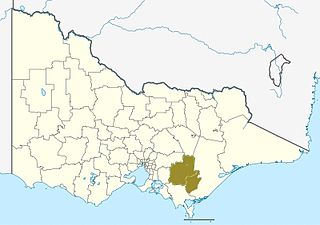 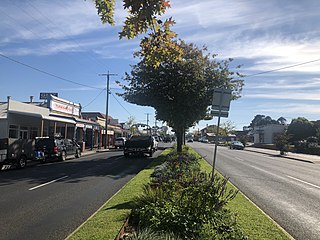 Stratford is a town on the Avon River in Victoria, Australia, 232 kilometres (144 mi) east of Melbourne on the Princes Highway in Shire of Wellington. At the 2006 census, Stratford had a population of 1950. The town services the local regional community and travellers on the Princes Highway. Stratford's principal industries are dairying, sheep, cattle and horse breeding and vegetable crops. The town has numerous coffee shops and cafes, a cellar door for a local winery, Design Gallery, model railway shop, a pub, parks and playgrounds for car travellers to break their journey. 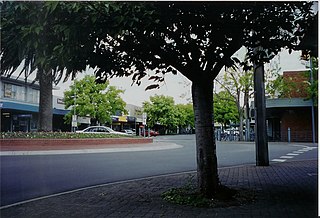 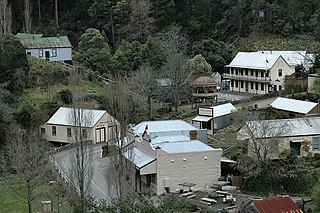 Beechworth is a well-preserved historical town located in the north-east of Victoria, Australia, famous for its major growth during the gold rush days of the mid-1850s. At the 2016 census, Beechworth had a population of 3,859.

Cowwarr is a town in Victoria, Australia, 27 kilometres north-east of Traralgon, 174 kilometres east of Melbourne, in the Shire of Wellington. At the 2016 census, Cowwarr and the surrounding area had a population of 368. 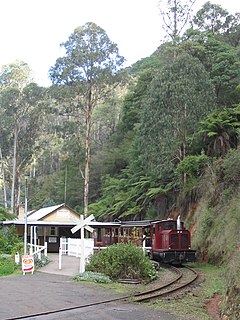 The Thomson River, a perennial river of the West Gippsland catchment, is located in the Gippsland region of the Australian state of Victoria.

Rosedale is a pastoral and agricultural town 184 kilometres east of Melbourne via the Princes Highway. It is situated on the southern side of the LaTrobe River. Once a staging post on the Port Albert to Sale and Port Albert to Walhalla coach runs, it was the administrative centre of the Shire of Rosedale which extended to the east and included the Ninety Mile Beach. It is now part of the Wellington Shire centred in Sale. At the 2006 census, Rosedale had a population of 1,077. The town is in the area of Gippsland explored separately by the Scotsman, Angus McMillan, and the Polish aristocrat, Count Paul von Strzelecki, in 1840. A memorial to McMillan is located in Rosedale, and one to Strzelecki near Traralgon to the west. McMillan named the region Gippsland after Governor Gipps.

Platina was a railway station on the Walhalla narrow gauge line in Gippsland, Victoria, Australia. The station was opened in 1910, and consisted of a passenger shed and a number of sidings. The Evans brothers built two lime kilns nearby in 1912, and had their own siding at the station.

Yinnar is a rural township located in the Latrobe Valley, in central Gippsland, Victoria, Australia. At the 2016 census, Yinnar had a population of 907. The origin of the name Yinnar is believed to have been derived from the local Aboriginal term yinnar, meaning "woman".

The Gippsland Plains Rail Trail is a 67 km recreational trail following the former historic Gippsland Plains railway line route between Traralgon and Stratford in Central Gippsland, Victoria. The trail passes through dairy country, the foothills of the Great Dividing Range to the north, and across the Great Gippsland Plains.

Harding, A and Ries, R (2003)Toongabbie, Gippsland A Gateway to the Walhalla Goldfields