Tooting is an impact crater (of the type rampart crater) with volcanic features at 23.1°N, 207.1°E, in Amazonis Planitia (Amazonis quadrangle), due west of the volcano Olympus Mons, on Mars. [1] It was identified by planetary geologist Peter Mouginis-Mark in September 2004. Scientists estimate that its age is on the order of hundreds of thousands of years, which is relatively young for a Martian crater. [2] A later study confirms this order of magnitude estimate. [3] A preliminary paper describing the geology and geometry of Tooting was published in 2007 by the journal Meteoritics and Planetary Science, vol. 42, pages 1615–1625. Further papers have more recently been published, including a 2010 analysis of flows on the walls of Tooting crater by A. R. Morris et al. (Icarus vol. 209, p. 369–389), and a 2012 review paper by P.J. Mouginis-Mark and J.M. Boyce in Chemie der Erde Geochemistry, vol. 72, p. 1–23. A geologic map has also been submitted in 2012 to the U.S. Geological Survey for consideration and future publication.

Tooting is named after the London suburb of the same name. This is in accordance with the International Astronomical Union's rules for planetary nomenclature, which specify that craters on Mars less than 60 km in diameter should be named after "villages of the world with a population of less than 100,000". [4] The discoverer named it after his home town because he "thought [his] mum and brother would get a kick out of having their home town paired with a land form on Mars". [5] This caused a stir in the British press, with many well-known media outlets reporting on the issue. [6] [7]

The crater's youth was inferred from the lack of superimposed cratering, preserved impact melt in the crater, and that the central peak of the crater has not been buried by sediment.

Research published in the journal Icarus has found pits in Tooting Crater that are caused by hot ejecta falling on ground containing ice. The pits are formed by heat forming steam that rushes out from groups of pits simultaneously, thereby blowing away from the pit ejecta. [8] [9]

Due to the flatness of the surrounding lava flows (at 3872 m below Martian datum), it is possible to infer much about the crater's formation and ejecta blanket. For example, the volume of ejecta deposited from the formation of the crater is estimated to be 450 cubic kilometres and that this process took less than half an hour. [2] [10]

Tooting has been compared to the craters Santa Fe and Endeavour (of Opportunity [MER-B] fame). [11]

Eberswalde, formerly known as Holden NE, is a partially buried impact crater in Margaritifer Terra, Mars. Eberswalde crater lies just to the north of Holden, a large crater that may have been a lake. The 65.3-km-diameter crater, centered at 24°S, 33°W, is named after the German town of the same name, in accordance with the International Astronomical Union's rules for planetary nomenclature. It was one of the final four proposed landing sites for the Mars rover Mars Science Laboratory mission. This extraterrestrial geological feature lies situated within the Margaritifer Sinus quadrangle (MC-19) region of Mars. Although not chosen, it was considered a potential landing site for the Mars 2020 Perseverance rover, and in the second Mars 2020 Landing Site Workshop it survived the cut and was among the top eight sites still in the running.

The geology of Mars is the scientific study of the surface, crust, and interior of the planet Mars. It emphasizes the composition, structure, history, and physical processes that shape the planet. It is analogous to the field of terrestrial geology. In planetary science, the term geology is used in its broadest sense to mean the study of the solid parts of planets and moons. The term incorporates aspects of geophysics, geochemistry, mineralogy, geodesy, and cartography. A neologism, areology, from the Greek word Arēs (Mars), sometimes appears as a synonym for Mars's geology in the popular media and works of science fiction. 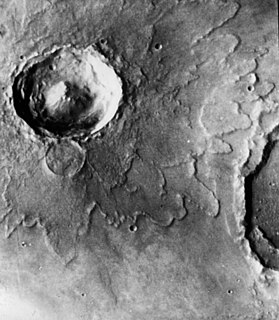 Yuty is a crater on Mars in Chryse Planitia, named after the town of Yuty in Paraguay. It measures approximately 19 kilometres in diameter, and is surrounded by complex ejecta lobes, which are a distinctive characteristic of martian impact craters.

Zunil is an impact crater near the Cerberus Fossae on Mars, with a diameter of 10.26 kilometres. It is named after the town of Zunil in Guatemala. The crater is located in the Elysium quadrangle. Visible in images from the Viking 1 and Viking 2 Mars orbiters in the 1970s, Zunil was subsequently imaged at higher resolution for the first time by the Mars Global Surveyor (MGS) Mars Orbiter Camera (MOC) in 2000. 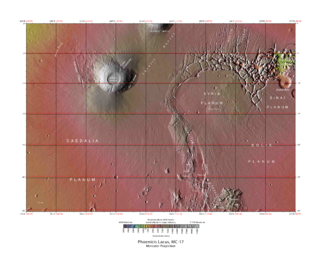 The Ceraunius Fossae are a set of fractures in the northern Tharsis region of Mars. They lie directly south of the large volcano Alba Mons and consist of numerous parallel faults and tension cracks that deform the ancient highland crust. In places, younger lava flows cover the fractured terrain, dividing it into several large patches or islands. They are found in the Tharsis quadrangle.

In planetary geology, a pedestal crater is a crater with its ejecta sitting above the surrounding terrain and thereby forming a raised platform. They form when an impact crater ejects material which forms an erosion-resistant layer, thus causing the immediate area to erode more slowly than the rest of the region. Some pedestals have been accurately measured to be hundreds of meters above the surrounding area. This means that hundreds of meters of material were eroded away. The result is that both the crater and its ejecta blanket stand above the surroundings. Pedestal craters were first observed during the Mariner missions.

Zumba is a very young crater on Mars, located in the Phoenicis Lacus quadrangle at 28.68 South and 133.18 West. It measures approximately 2.93 kilometres (1.82 mi) in diameter and was named after the town of Zumba in Ecuador. The name was adopted by IAU's Working Group for Planetary System Nomenclature in 2006. 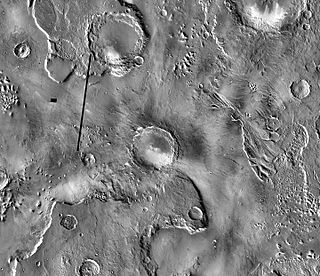 Mojave is a 58 km diameter impact crater in the Oxia Palus quadrangle of Mars, located at 7.5° N and 33.0° W. It was named after the town of Mojave in southern California, U.S. 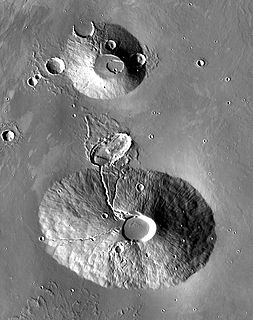 Rahe is a crater on the planet Mars in the Tharsis quadrangle, positioned at 25.05° north latitude and 262.52° east longitude, between the volcanoes Ceraunius Tholus and Uranius Tholus. It measures approximately 34 kilometers in diameter and was named after Jürgen Rahe, a German-American astronomer and NASA science program director.

The Amazonian is a geologic system and time period on the planet Mars characterized by low rates of meteorite and asteroid impacts and by cold, hyperarid conditions broadly similar to those on Mars today. The transition from the preceding Hesperian period is somewhat poorly defined. The Amazonian is thought to have begun around 3 billion years ago, although error bars on this date are extremely large. The period is sometimes subdivided into the Early, Middle, and Late Amazonian. The Amazonian continues to the present day.

A new class of Martian impact craters have been discovered by Northern Arizona University scientist Prof Nadine Barlow and Dr Joseph Boyce from the University of Hawaii in Oct 2013. They have termed it as ‘low-aspect-ratio layered ejecta (LARLE) craters’. Prof Nadine Barlow, a scientist Northern Arizona University described this class of craters with “thin-layered outer deposit” surpassing “the typical range of ejecta”. “The combination helps vaporize the materials and create a base flow surge. The low aspect ratio refers to how thin the deposits are relative to the area they cover,” Prof Barlow said. The scientists used data from continuing reconnaissance of Mars using the old Mars Odyssey Orbiter and the Mars Reconnaissance Orbiter, discovered 139 LARLE craters ranging in diameter from 1.0 to 12.2 km, with 97 per cent of the LARLE craters are found poleward of 35N and 40S, while remaining mainly traced in the equatorial Medusae Fossae Formation.

Resen is a crater in the Mare Tyrrhenum quadrangle on Mars, located at 28.22° South and 251.13° West. It is measures 7.4 kilometers in diameter and was named after the town of Resen in North Macedonia. The naming was approved by IAU's Working Group for Planetary System Nomenclature on 19 January 2011. 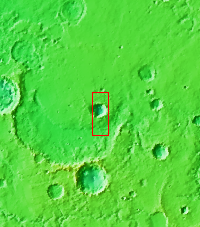 Bopolu is an impact crater located within the Meridiani Planum extraterrestrial plain of Mars. Bopulu was seen by Opportunity rover in 2010 in the distance, and with some of its rim visible. Bopoplu was officially named in 2006 along with 31 Mars craters. Research has indicated that the impact that is thought to have created Bopulu went so deep that it went through existing layers and ejected older material from Mars' Noachian period. Bopulu is a 19 kilometres (12 mi) diameter wide crater south of the Opportunity MER-B landing site, a rover which operated in the region starting in 2004 and therefore resulted in greater exploration and study of craters in this region. Bopulu was identified as a possible source for the Bounce Rock ejecta fragment Bounce rock, which was examined by the MER-B rover, was found to be similar in composition to the shergottite class of Mars meteorite found on Earth.

Auki is an impact crater in the Mare Tyrrhenum quadrangle of Mars, at 15.76 °S latitude and 263.13 °W longitude. It is 40.0 km in diameter and was named after Auki, a town in the Solomon Islands, in 2015 by the International Astronomical Union (IAU) Working Group for Planetary System Nomenclature (WGPSN).

There are a number of different types of craters that have been observed and studied on Mars. Many of them are shaped by the effects of impacts into ice-rich ground.