They were the feeder club for the National Rugby League's Brisbane Broncos from 1999 to 2006. [2] Despite being considered the most successful rugby league club of all time, financial difficulties severely damaged the club. On 6 December 2006, the board announced that the club was roughly A$100,000 short to be able to field a team in the 2007 Queensland Cup and its future is now uncertain. The following day the Aspley Broncos were announced as the new feeder team for the Broncos. [3]

The Clydesdales have spoken about being re-admitted back into the Queensland Cup [ when? ], being based in the region of Toowoomba. The Gold Coast Titans have agreed[ when? ] to make the Clydesdales their third affiliated Queensland Cup team if the bid was successful. The club will also be rebranded to "Western Mustangs".[ citation needed ]

Ever since they were founded, the Clydesdales have produced some great players:

Robina Stadium, also known by its sponsored name Cbus Super Stadium, is a rectangular football stadium in the Gold Coast suburb of Robina, Queensland. The main usage is as the home ground to the National Rugby League's Gold Coast Titans; this venue sometimes hosts the A-League team Brisbane Roar FC.

Joel Moon is an Australian former professional rugby league footballer who played as a centre and five-eighth in the 2000s and 2010s. He last played for the Leeds Rhinos in the Super League.

The Aspley Broncos are a rugby league club in Brisbane, Australia. Aspley competes in the FOGS Cup and FOGS Colts Challenge competitions. In 2007 they competed in the Queensland Cup as a feeder club to the Brisbane Broncos. 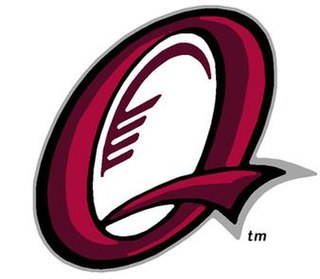 The FOGS Colts Challenge is an 11-team rugby league competition run by the QRL. It is the highest level of junior rugby league in Brisbane before players move into senior rugby. FOGS in an acronym for Former Origin Greats.

Denan Kemp is an Australian former professional rugby league footballer who played in the 2000s and 2010s in the National Rugby League (NRL). Kemp's position of choice was on the wing. He played in the NRL for the Brisbane Broncos, the New Zealand Warriors and the St George Illawarra Dragons. He also had a brief stint in rugby union in 2011, playing for Southern Districts in the Shute Shield competition.

The 2007 Queensland Cup season was the 12th season of Queensland's top-level statewide rugby league competition run by the Queensland Rugby League. The competition, known as the Queensland Wizard Cup due to sponsorship from Wizard Home Loans featured 11 teams playing a 26-week long season from March to September.

Jamie Simpson is a coach with the Central Queensland Capras, a feeder club for the NRL club the Brisbane Broncos in the Queensland Cup and a former rugby league footballer who played in the 2000s and 2010s. Simpson played as a wing and as a centre. Simpson also played as a lock and five-eighth in his schoolboy years at St. Brendan's College, Yeppoon. Simpson is avid worker in the community and is an ambassador for The Men Of League Foundation and Lymphoma Australia. 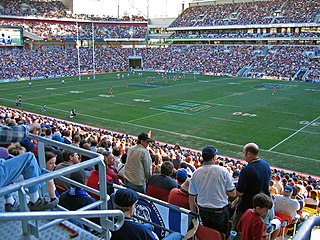 The National Rugby League is the top level rugby league competition in Australia and New Zealand. It was formed in 1998 after the merger of the Australian Super League and the Australian Rugby League. It originally contained twenty teams but this was cut down to 14 by 2000. Expansion increased this number back up to 16.

Brodie Croft is an Australian professional rugby league footballer who plays as a halfback or five-eighth for the Brisbane Broncos in the NRL.

The 2017 Brisbane Broncos season is the 30th in the club's history. Coached by Wayne Bennett, and captained by Darius Boyd, they compete in the NRL's 2017 Telstra Premiership. Prior to the start of the Premiership season, the Broncos competed in the 2017 NRL Auckland Nines, finishing first in their pool, but lost the Quarter-Final.

Ashley Alberts is an Australian former rugby league footballer who played for the North Queensland Cowboys and Manly Warringah Sea Eagles in the National Rugby League. He primarily played at centre and wing.

The 2001 Queensland Cup season was the 6th season of Queensland's top-level statewide rugby league competition run by the Queensland Rugby League. The competition, known as the Bundy Gold Cup due to sponsorship from Bundaberg Rum, featured 11 teams playing a 26-week long season from March to September.