The Topčider Case or the Guardsmen Murder Case (Serbian : Убиство гардиста, romanized: Ubistvo gardista) was an affair regarding the death of two soldiers of the Guards Unit of the Army of Serbia and Montenegro in 2004. The guardsmen, Dražen Milovanović and Dragan Jakovljević, were killed at their guarding posts in the Karaš military facility in Topčider, Belgrade, on 5 October 2004. No person was ever persecuted for this double-murder, and the case remains unsolved.

First commission, set up by the military, found that the two soldiers died in a murder-suicide incident, without the involvement of any other persons. The expertise ordered by the Investigating magistrate of the Court Martial in Belgrade, Vuk Tufegdžić ascertained that Jakovljević killed Milovanović, and then committed suicide. On the occasion, 20 bullets were shot.

Because of the apparent faults of the Tufegdžić commission, the President of Serbia and Montenegro Svetozar Marović, formed new State Investigative Commission led by the attorney-in-law Božo Prelević. In this investigation, it was ascertained in an indisputably professional manner, by expertise, that both soldiers had been killed by a third person. [1] Such findings of the National Committee were confirmed by ballistic experts of FBI Quantico Laboratory from Washington, D.C. as well as the forensic expert Ljubomir Dragović, also from the USA. [2]

The murder remains unsolved and the investigation is still ongoing. No person was ever persecuted for the deaths of two soldiers. [3] In 2013, the Constitutional Court of Serbia ruled that the right to a fair trial and the right to life of families of the killed guardsmen have been violated. [4] In 2016, the Government of Serbia made official decision to form third Commission for the investigation of the Case. As of March 2020 [update] , members of this Commission have not been named yet. [3] In 2016, then Prime Minister of Serbia, Aleksandar Vučić spoke about "very important information collected by the police", but refused to reveal any details. [3]

The scenario most commonly debated by the media is that the soldiers were killed after they saw General Ratko Mladić (fugitive from the ICTY) hiding in the military facility. [5] [6] This version was also suggested by the prosecution at the Mladić Trial and the families of the two guardsmen. [7] 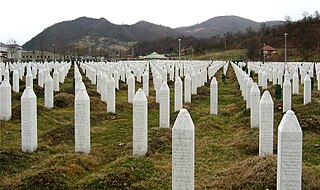 The Srebrenica massacre, also known as the Srebrenica genocide, was the July 1995 genocide of more than 8,000 Bosniaks, mainly men and boys, in and around the town of Srebrenica during the Bosnian War. 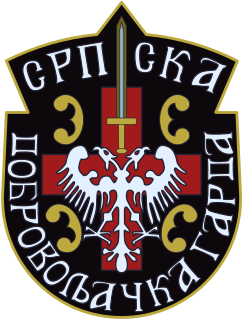 The Serb Volunteer Guard, also known as Arkan's Tigers or Arkan's men, was a Serbian volunteer paramilitary unit founded and led by Arkan that fought in Croatia (1991–93) and Bosnia (1992–95) during the Yugoslav Wars.

Topčider is a forest park and an urban neighborhood of Belgrade, the capital of Serbia. It is divided between the municipalities of Čukarica, Rakovica and Savski Venac. Being close to downtown, it is one of the major locations for relaxation, picnics and fresh air for the citizens of Belgrade.

See You in the Obituary is a 1995 made-for-TV 35-minute documentary film, authored by Aleksandar Knežević and Vojislav Tufegdžić, technical part of the film directed by Janko Baljak, based on the book The Crime that Changed Serbia by Knežević and Tufegdžić and produced by the Belgrade-based independent news broadcaster B92.

The communist purges in Serbia in 1944–1945 are atrocities that were committed by members of the Yugoslav Partisan Movement and post-war communist authorities after they gained control over Serbia, against people perceived as war criminals, quislings and ideological opponents. Most of these purges were committed between October 1944 and May 1945. During this time, at least 55,973 people died of various causes, including death by execution or by illness in retention camps. The victims – vast majority of them deliberately murdered, without a trial – were of different ethnic backgrounds, but were mostly Germans, Serbs and Hungarians. The critics who oppose the naming of the purges a deliberate mass killing, among other things claim that the events were not officially planned out, but were simply unorganised vendetta of individuals due to post-war chaos. There is even a notion that the purges are a forgery, as many supposedly innocent victims from the proposed lists died in battles against partisans. 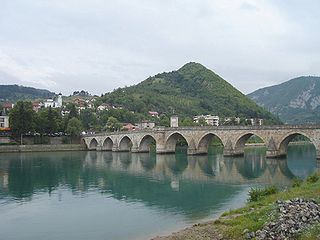 The Višegrad massacres were acts of mass murder committed against the Bosniak civilian population of the town and municipality of Višegrad during the ethnic cleansing of eastern Bosnia by Serb police and military forces during the spring and summer of 1992, at the start of the Bosnian War.

During the Bosnian War, there was an ethnic cleansing campaign committed by the Bosnian Serb political and military leadership - Army of the Republika Srpska, mostly against Bosniak and Croat civilians in the Prijedor region of Bosnia and Herzegovina in 1992 and 1993. The composition of non-Serbs was drastically reduced: out of a population of 50,000 Bosniaks and 6,000 Croats, only some 6,000 Bosniaks and 3,000 Croats remained in the municipality by the end of the war. After the Srebrenica massacre, Prijedor is the area with the second highest rate of civilian killings committed during the Bosnian War. According to the Sarajevo-based Research and Documentation Center (IDC), 4,868 people were killed or went missing in the Prijedor municipality during the war. Among them were 3,515 Bosniak civilians, 186 Croat civilians and 78 Serb civilians. As of October 2013, 96 mass graves have been located and around 2,100 victims have been identified, largely by DNA analysis. 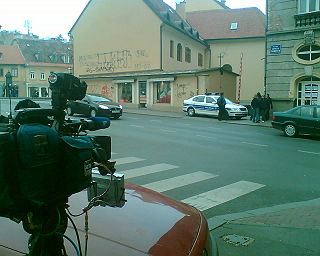 The assassination of Ivo Pukanić happened on 23 October 2008 in Zagreb, Croatia, when a remote-detonation car bomb fitted on a motorcycle outside the Nacional newspaper's premises killed the owner of the newspaper, Ivo Pukanić, and Niko Franjić, its marketing manager, and injured two more people. The explosion occurred in the centre of the capital at 18:10 local time. Numerous arrests of suspects around the country followed. A subsequent police investigation accused Croatian and Serbian organized crime groups of perpetrating the bombing. Eight people suspected of having connections to organised crime groups were indicted. Six were later convicted over the murders with prison terms ranging from 15 to 40 years. 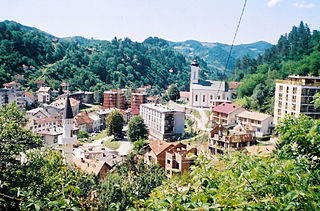 The Siege of Srebrenica was a three-year siege of the town of Srebrenica in eastern Bosnia and Herzegovina which lasted from April 1992 to July 1995 during the Bosnian War. Initially assaulted by the Yugoslav People's Army (JNA) and the Serbian Volunteer Guard (SDG), the town was encircled by the Army of Republika Srpska (VRS) in May 1992, starting a brutal siege which was to last for the majority of the Bosnian War. In June 1995, the commander of the Army of the Republic of Bosnia and Herzegovina (ARBiH) in the enclave, Naser Orić, left Srebrenica and fled to the town of Tuzla. He was subsequently replaced by his deputy, Major Ramiz Bećirović.

The Sjeverin massacre was the massacre on 22 October 1992 of 16 Bosniak citizens of Serbia from the village of Sjeverin who had been abducted from a bus in the village of Mioče, in Bosnia. The abductees were taken to the Vilina Vlas hotel in Višegrad where they were tortured before being taken to the Drina River and executed. Members of a Serbian paramilitary unit commanded by Milan Lukić were convicted of the crime in 2002.

Ratko Mladić is a Bosnian Serb former military commander and convicted war criminal who led the Army of Republika Srpska (VRS) during the Yugoslav Wars. In 2017 he was found guilty of committing war crimes, crimes against humanity, and genocide by the International Criminal Tribunal for the former Yugoslavia (ICTY).

Živorad "Žika" Petrović was a Serbian engineer and business executive. He was assassinated in the spring of 2000. At the time of his death, Petrović was the CEO of Serbian flag carrier Jat Airways. The crime remains unsolved to this day. 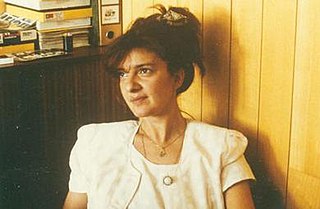 Radislava "Dada" Vujasinović was a Serbian journalist and reporter for the news magazine Duga, published in Belgrade. 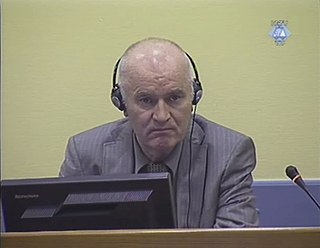 The Prosecutor v. Ratko Mladić was a war crimes trial before the International Criminal Tribunal for the former Yugoslavia (ICTY) in The Hague, Netherlands, concerning crimes committed during the Bosnian War by Ratko Mladić in his role as a general in the Yugoslav People's Army and the Chief of Staff of the Army of Republika Srpska.

The Colorado Coalfield War was a major labor uprising in the southern and central Colorado Front Range between September 1913 and April 1914. Striking began in late summer 1913, organized by the United Mine Workers of America against the Rockefeller-owned Colorado Fuel and Iron (CF&I) after years of poor working conditions. The strike was marred by targeted and indiscriminate attacks from both strikers and individuals hired by CF&I to defend its property. Conflict was focused in the southern coal-mining counties of Las Animas and Huerfano, where the Colorado and Southern railroad passed through Trinidad and Walsenburg. It followed the 1912 Northern Colorado Coalfield Strikes. 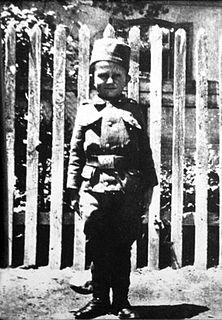 Momčilo Gavrić was the youngest known soldier in the First World War who was accepted into his unit at the age of seven, and promoted to the rank of corporal at the age of eight. 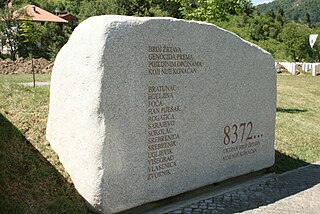 Bosnian genocide denial is an act of denying or asserting that the systemic Bosnian genocide against the Bosniak Muslim population of Bosnia and Herzegovina, as planned and perpetrated in line with official and academic narratives defined and expressed by part of the Serb intelligentsia and academia, political and military establishment, did not occur, or at least it did not occur in the manner or to the extent that has been established by the International Criminal Tribunal for the former Yugoslavia (ICTY) and the International Court of Justice (ICJ) through its proceedings and judgments, and described by subsequent comprehensive scholarship.

Vjerica Radeta is a Serbian politician. She is currently serving her fifth term in the National Assembly of Serbia as a member of the far-right Serbian Radical Party. She has served as a deputy speaker of the assembly since 2016.