Top Billing may refer to:

William Henry Cosby Jr. is an American stand-up comedian, actor, author, and convicted sex offender. Cosby began his career as a stand-up comic at the hungry i in San Francisco during the 1960s. He then landed a starring role in the television show I Spy, followed by his own sitcom The Bill Cosby Show, which ran for two seasons from 1969 to 1971. In 1972, using the Fat Albert character developed during his stand-up routines, Cosby created, produced, and hosted the animated comedy television series Fat Albert and the Cosby Kids which ran until 1985, centering on a group of young friends growing up in an urban area. Throughout the 1970s, Cosby starred in about half a dozen films, and he occasionally returned to film later in his career. In 1976, he earned his Doctor of Education from the University of Massachusetts Amherst. His dissertation discussed the use of Fat Albert and the Cosby Kids as a teaching tool in elementary schools.

The Cosby Show is an American television sitcom co-created by and starring Bill Cosby, which aired for eight seasons on NBC from September 20, 1984, until April 30, 1992. The show focuses on an upper middle-class African-American family living in Brooklyn, New York.

SABC 3 is a South African free-to-air television network owned by the South African Broadcasting Corporation (SABC). It carries programming in English and, as of April 2009, Afrikaans, which, originally had its own series but in the last few years has been mainly repeats of 7de Laan.

The mass media in South Africa has a large mass media sector and is one of Africa's major media centres. While South Africa's many broadcasters and publications reflect the diversity of the population as a whole, the most commonly used language is English. However, all ten other official languages are represented to some extent or another. Afrikaans is the second most commonly used language, especially in the publishing sector.

L. Scott Caldwell is an American actress known for her role as Rose on Lost. 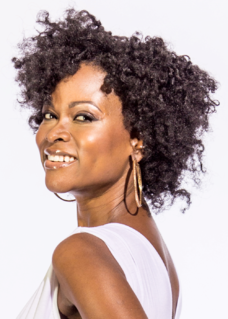 Abiola Abrams is an American TV host, filmmaker, Internet personality, personal coach, motivational speaker and author. Her advice columns on topics such as relationships and self-worth include Intimacy Intervention on Essence.com and Abiola's Love Class on MommyNoire.com. She is the author of the self-esteem advice guide The Official Bombshell Handbook: The 13 Sacred Secrets of Feminine Power and Dare, a love story retelling of Faust set in the hip hop world. Abrams is also the creator of a lifestyle blog and web video series at AbiolaTV.com.

The Awakening is a South African musical project founded in Johannesburg, South Africa, in 1995 by vocalist, songwriter, guitarist and producer Ashton Nyte. The sound has been described as a hybrid of gothic rock, industrial rock and new wave - a combination that was described by Nyte as "dark future rock." The Awakening has released eight studio albums, several singles, EPs and two greatest hits compilations. As of 2008 The Awakening has been based in the United States.

Karla Burns is an American operatic mezzo-soprano and actress who has performed nationally and internationally in opera houses, theaters, and on television. She is notably the first black person, African-American or otherwise, to win the Laurence Olivier Award, Britain's most prestigious award for theatre.

Bill Ralston is a New Zealand journalist, broadcaster, and media personality, active in television, radio and print. He has worked as a political correspondent, fronted the television arts show Backch@t, and was the head of news and current affairs at TVNZ from 2003 to 2007. The New Zealand Herald has described him as controversial.

Leo Howard is an American actor and martial artist. Howard is known for incorporating his karate skills into his feature film and television roles; as "Young Snake-Eyes" in the 2009 action film, G.I. Joe: The Rise of Cobra, as "Young Conan" in the 2011 fantasy film, Conan the Barbarian, and as Jack on the Disney XD comedy series, Kickin' It. Howard was certified as the youngest TV director ever by the Guinness World Records for his work on the episode "Fight at the Museum" in the fourth season of the Kickin' It TV series at age 16. He also played CeCe's rival Logan on Shake it Up in the third season.

Jo-Ann Cindy Strauss is a South African model, public speaker and businesswoman. In 2001, she represented her country as Miss South Africa at the Miss Universe pageant in Puerto Rico as well as at the Miss World pageant hosted at Sun City in her home country in 2001. She was featured in the 2001 music video of the Irish pop group Westlife's single "When You're Looking Like That".

Quentin "Dragon" Chong is a retired South African professional Muaythai martial artist, a trainer/coach and actor who has appeared in a number of American movies, local TV series, advertisements and magazines.

Soundcity TV is a 24-hour Nigerian lifestyle and music channel based in Lagos from Consolidated Media Associates Limited. Soundcity TV describes itself as a "pan-African urban music TV channel."

Lesley Rochat is a South African marine and shark conservationist., campaigner, wildlife filmmaker, underwater photographer, environmental writer, author, speaker and activist. She founded the non-profit organisation AfriOceans Conservation Alliance in 2003 for which she is the chief executive officer.

The 25th International Emmy Awards took place on November 24, 1997, at the Hilton Hotel in New York City, United States. The ceremony was hosted by Sir Peter Ustinov and the presenters included the actor Armand Assante, the dancer- choreographer Savion Glover, and the actress Marilu Henner. 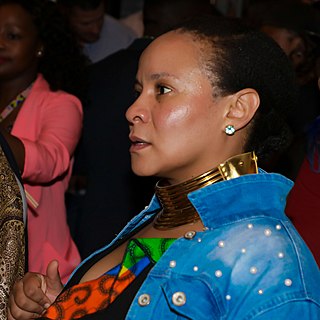