The third season of the American reality competition show Top Chef Masters was announced on March 2, 2011. In addition to the announcement, it was announced that celebrity chef Curtis Stone would serve as the new host. Food critic and author Ruth Reichl also joined as a new series judge And Critic James Osland Also Returned. The season premiered on April 6, 2011 with 12 award-winning chefs competing against each other in weekly challenges. Unlike previous seasons, the chefs were not judged on a five-star rating system, but in elimination-style challenges similar to the format of the original Top Chef series. [1]

12 chefs competed in this season of Top Chef Masters. [2] In the order eliminated:

^Note 1 : Hugh was reinstated in Episode 2, after being eliminated in the previous episode. ^Note 2 : John S. withdrew from the competition due to a personal emergency.

In each episode, the chefs compete to win money for their charity. The Elimination Round winners are awarded cash donations ($10,000) for their charities. Each episode consists of a Quickfire and an Elimination challenge. The Quickfire is a short, simple challenge that can vary from cooking, tasting or a food-related task (e.g., peeling a certain amount of apples to certain quality standard in a limited amount of time). The winner(s) of the Quickfire Challenge receive $5,000 for their charity. During the initial episodes of the season, the winner is usually guaranteed immunity from being sent home that week. The Elimination challenge is a more complex challenge which usually requires cooking a meal for many people with certain requirements. Unlike previous seasons of Top Chef Masters, the dishes are no longer rated out of a possible five stars. The star scoring system is replaced with the elimination format of the original Top Chef series. Each week, one or more guest judges join the show to evaluate both the Quickfire and Elimination challenges. Each week's elimination is announced in a segment called the "Critics' Table." One or more contestants are eliminated in each episode until the finale where one chef is crowned Top Chef Master. The winning chef receives $100,000 for his or her designated charity.

Episode 2: Everything Old is New Again

Episode 6: I'm With the Band

Episode 8: Blinded Me with Science

Top Chef: New York is the fifth season of the American reality television series Top Chef. It was first filmed in New York City, New York, before concluding in New Orleans, Louisiana. The season premiered on Bravo on November 12, 2008, and ended on March 4, 2009. In the season finale, Hosea Rosenberg was declared the Top Chef, defeating Stefan Richter and Carla Hall. Fabio Viviani was voted Fan Favorite. 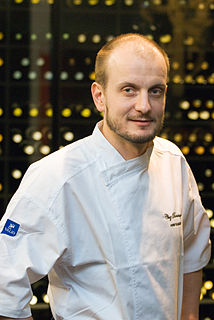 The first season of the Canadian reality competition show Top Chef Canada was broadcast on Food Network in Canada. It is a Canadian spin-off of Bravo's hit show Top Chef. In the first season, 16 chefs competed against each other in weekly challenges. The program took place in Toronto. In the season finale that premiered on July 4, 2011, Dale MacKay was crowned Top Chef Canada.

The first season of the Romanian reality television series Top Chef began airing on November 5, 2012 on Antena 1. The host was Alina Pușcaș and the judges were Joseph Hadad, Tudor Constantinescu and Nicolai Tand. Twenty-four contestants appeared.

The third season of the Canadian reality competition show Top Chef Canada was broadcast on Food Network in Canada. It is a Canadian spin-off of Bravo's hit show Top Chef.

The fifth season of the Australian competitive cooking competition show My Kitchen Rules premiered on the Seven Network on 27 January 2014.

Project Runway Season 12 is the twelfth season of the television show Project Runway, appearing on Lifetime. The season began airing on July 18, 2013 with 15 designers competing to become "the next great American designer." Kate Pankoke, a designer from Season 11 returned to compete once again for the grand prize. Pankoke was voted back by fans in an online poll, winning against Ra'mon Lawrence Coleman of Season 6, and Valerie Mayen of Season 8

The seventh season of the Australian competitive cooking game show My Kitchen Rules premiered on 1 February 2016.

Top Chef Thailand is the first season of the Thai reality television series Top Chef Thailand. The season premiered on March 25, 2017, and concluded on June 24, 2017. Filming initially took place in Bangkok. Willment Leong, Suphamongkhon Suppipat, Thidid Tadsanakajon and Phichaya Uthantam served as judges and Pitipat Kutragule as a host for the first season.