Top dying disease is a disease that affects Heritiera fomes , a species of mangrove tree known as "sundri", a characteristic tree of the estuarine complex of the Ganges–Brahmaputra Delta in Bangladesh and West Bengal. Although an increase in certain trace elements in the sediment deposited where these trees grow may be a factor in the incidence of the disease, its cause has not been fully established.

Heritiera fomes is a species of mangrove tree in the family Malvaceae. Its common names include sunder, sundri, jekanazo and pinlekanazo. It is the dominant mangrove tree species of the Sundarbans of Bangladesh and India, and comprises about 70% of the trees in the area. H. fomes is a major timber-producing tree. It is threatened by over-harvesting, water diversions in the Ganges Basin, fluctuations in salinity due to upstream and coastal development and top dying disease. The International Union for Conservation of Nature has assessed it as being "endangered". 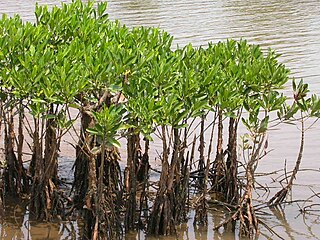 A mangrove is a shrub or small tree that grows in coastal saline or brackish water. The term is also used for tropical coastal vegetation consisting of such species. Mangroves occur worldwide in the tropics and subtropics, mainly between latitudes 25° N and 25° S. The total mangrove forest area of the world in 2000 was 137,800 square kilometres (53,200 sq mi), spanning 118 countries and territories.

The Ganges-Brahmaputra Delta is a river delta in the Bengal region of the Indian subcontinent, consisting of Bangladesh and the Indian state of West Bengal. It is the world's largest delta and empties into the Bay of Bengal the combined waters of several river systems, mainly those of the Brahmaputra river and the Ganges river. It is also one of the most fertile regions in the world, thus earning the nickname The Green Delta. The delta stretches from the Hooghly River on the west to the Meghna River on the east.

About 63% of the trees growing in the Sundarbans are Heritiera fomes. Sporadic instances of top dying disease had been noticed in these trees earlier in the twentieth century but the disease became more acute and extensive after about 1970. [1] An inventory of trees in the Sundarbans in 1985 recorded 45 million diseased trees with nearly half of these having more than half their crown affected. [2] No causal agent has been discovered and the dieback is thought to be the result of stressful conditions, perhaps caused by an increase in the heavy metal concentration of the sediment deposited in the delta. [1]

The Sundarbans is a mangrove area in the delta formed by the confluence of Ganges, Brahmaputra and Meghna Rivers in the Bay of Bengal. It spans from the Hooghly River in India's state of West Bengal to the Baleswar River in Bangladesh. It comprises closed and open mangrove forests, agriculturally used land, mudflats and barren land, and is intersected by multiple tidal streams and channels. Four protected areas in the Sundarbans are enlisted as UNESCO World Heritage Sites, viz Sundarbans National Park, Sundarbans West, Sundarbans South and Sundarbans East Wildlife Sanctuaries. The Sundarbans mangrove forest covers an area of about 10,000 km2 (3,900 sq mi). Of which, forests in Bangladesh's Khulna Division extend over 6,017 km2 (2,323 sq mi) and in West Bengal, they extend over 4,260 km2 (1,640 sq mi) across the South 24 Parganas and North 24 Parganas districts. The most abundant tree species are Sundri and Gewa. The forests provide habitat to 453 faunal wildlife, including 290 bird, 120 fish, 42 mammal, 35 reptile and eight amphibian species.

Forest dieback is a condition in trees or woody plants in which peripheral parts are killed, either by pathogens, parasites or due to conditions like acid rain and drought. Two of the nine tipping points for major climate changes, forecast for the next century, are directly related to forest diebacks.

The uppermost parts of the tree are affected first with loss of leaves and dieback of branches in the crown. One or more knot-like swellings may develop on affected branches. Lower branches are progressively affected over time. Wood-boring insects and fungi invade the diseased wood and the tree eventually dies. [3]

The crown of a plant refers to the totality of an individual plant's aboveground parts, including stems, leaves, and reproductive structures. A plant community canopy consists of one or more plant crowns growing in a given area. 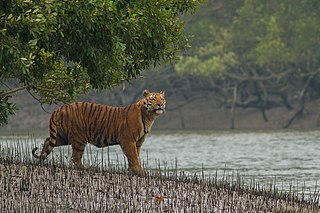 The Sundarbans National Park is a National Park, Tiger Reserve, and a Biosphere Reserve in West Bengal, India. It is part of the Sundarbans on the Ganges Delta, and adjacent to the Sundarban Reserve Forest in Bangladesh. The delta is densely covered by mangrove forests, and is one of the largest reserves for the Bengal tiger. It is also home to a variety of bird, reptile and invertebrate species, including the salt-water crocodile. The present Sundarban National Park was declared as the core area of Sundarban Tiger Reserve in 1973 and a wildlife sanctuary in 1977. On 4 May 1984 it was declared a National Park. It is a UNESCO world heritage site inscribed in 1987, and it has been designated as a Ramsar site since 2019. It is considered as a World Network of Biosphere Reserve from 2001.

The Bengal Fan, also known as the Ganges Fan, is the largest submarine fan on Earth. The fan is about 3,000 km (1,900 mi) long, 1,430 km (890 mi) wide with a maximum thickness of 16.5 km (10.3 mi). The fan resulted from the uplift and erosion of the Himalayas and the Tibetan Plateau produced by the collision between the Indian Plate and the Eurasian Plate. Most of the sediment is supplied by the Ganges and Brahmaputra rivers which supply the Lower Meghna delta in Bangladesh and the Hoogly delta in West Bengal (India). Several other large rivers in Bangladesh and India provide smaller contributions. Turbidity currents have transported the sediment through a series of submarine canyons, some of which are more than 1,500 miles (2,414 km) in length, to be deposited in the Bay of Bengal up to 30 degrees latitude from where it began. To date, the oldest sediments recovered from the Bengal fan are from Early Miocene age. Their mineralogical and geochemical characteristics allow to identify their Himalayan origin and demonstrate that the Himalaya was already a major mountain range 20 million years ago. 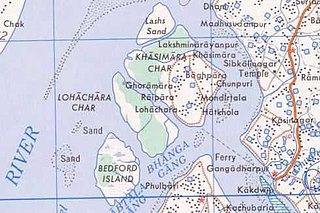 Lohachara Island was an islet which was permanently flooded in the 1980s. It was located in the Hooghly River as part of the Sundarban delta in the Sundarban National Park, located near the Indian state of West Bengal. The definite disappearance of the island was reported by Indian researchers in December 2006, which led to international press coverage. No specific study was ever done to prove that the island was permanently inundated because of sea level rise. 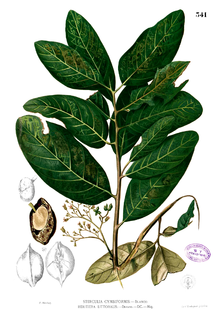 Heritiera littoralis, the looking-glass mangrove is a large tree with wing shaped nuts, which is most easily recognised by the silvery scales on the underside of its leaves, which therefore appear green from top and white from below, although Litsea mellifera A.C. Smith, has the same type of leaves. The tree is usually found to grow along the seashore in Bangladesh & Indian Subcontinent, Southeast Asia and Tropical Africa.

The Indus River Delta-Arabian Sea mangroves are a large mangrove ecoregion on the Arabian Sea coast of Sindh Province, Pakistan. The Indus River Delta forms a vast alluvial fan composed of mud flats interspersed with channels and fringed with mangrove forests. Much of the forested area has been destroyed and the remaining parts are threatened. 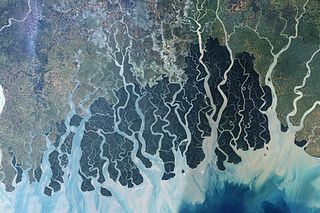 Hymenoscyphus fraxineus is an Ascomycete fungus that causes ash dieback, a chronic fungal disease of ash trees in Europe characterised by leaf loss and crown dieback in infected trees. The fungus was first scientifically described in 2006 under the name Chalara fraxinea. Four years later it was discovered that Chalara fraxinea was only the asexual (anamorphic) stage of a fungus that was subsequently named Hymenoscyphus pseudoalbidus and then renamed as Hymenoscyphus fraxineus.

Birch dieback is a disease of birch trees that causes branches in the crown to die off. The disease may eventually kill the tree. In an event in the Eastern United States and Canada in the 1930s and 1940s, no causal agent was found, but the wood-boring beetle, the bronze birch borer, was implicated in the severe damage and death of the tree that often followed. In similar crown dieback occurrences in Europe several decades later, the pathogenic fungus Melanconium betulinum were found in association with affected trees, as well as Anisogramma virgultorum and Marssonina betulae.

Mangrove deforestation in Myanmar is the clearing of mangrove forests, usually for commercial uses or resources extraction, which is occurring mainly in 3 different regions: Rakhine State, Ayeyarwaddy Mega Delta, and Tanintharyi Division. While large areas of mangrove forests remain, the deforestation rates of these forests have been increasing due to anthropogenic influences such as economic pressures to overexploit and expand the aquaculture and agricultural industry. There are also natural threats that contribute to mangrove deforestation such as soil erosion. There has been recent increased attention to conserve and restore these forests through rehabilitation projects and policies.

Environmental impact of development in the Sundarbans, is the study of environmental impact on Sundarban, the largest single tract mangrove forest. It consist of a geographical area of 9,629 square kilometres (3,718 sq mi), including 4,185 square kilometres (1,616 sq mi) of reserve forest land, and is a natural region located partly in southern Bangladesh and partly in the Indian state of West Bengal. It is ecologically a southern part of the Gangetic delta between the Hooghly river in India on the west and the Meghna river in Bangladesh on the east and is bounded by the Ganga-Padma, the Padma-Meghna on the north and by the Bay of Bengal on the south. The area that is not reserve forest land is inhabited by human settlements with a total population around 4 million (2003).

The Guianan mangroves (NT1411) is a coastal ecoregion of southeastern Venezuela, Guyana, Suriname and French Guiana. The mangroves provide an important habitat for migrating birds that winter in the area. Large areas are intact, although they are threatened by destruction of the trees for timber and to make way for agriculture, and from upstream agricultural and industrial pollution.