Top loader or toploader may refer to:

Toploader are a British alternative rock band from Eastbourne who formed in 1997, with over two million album sales and a string of top 20 hits both home and abroad. Their debut album, Onka's Big Moka, sold over one million units and peaked in the Top 5 of the UK Albums Chart. They are recognised most of all for their cover of King Harvest's US hit "Dancing in the Moonlight" written by Sherman Kelly, which became a global hit for the band. Their second album, Magic Hotel, reached number 3 in the UK Albums Chart. Their third album was released in 2012; their comeback single "Turn It Around" was released in 2013.

A Toploader transmission is a manually shifted three and four speed gearbox introduced in 1963 by the Ford Motor Company to replace the BorgWarner T-10. It was used in most Fords and Mercurys from 1964 until 1973 as well as some foreign models. Officially designated the 3.03 three speed or Ford design four speed. The 3.03 is the centerline distance between counter shaft and mainshaft. The Toploader got its name from the fact that the access plate to the inner workings was located on the top of the main case as opposed to the side, a convention used on most gearboxes such as the Ford Dagenham or GM's Saginaw or Muncie. This feature increased the rigidity of the case significantly. Distinguishing the three speed from the four is as simple as counting the fasteners on the top plate. The four speed has ten; the three, nine. Both the three and four speed top loader gearboxes were designed to function in constant mesh, due to synchronizer sleeves being used instead of sliding gears, and be fully synchronized, with the exception of reverse. Forward gears are helical-type while reverse gear including the exterior of the first and second synchronizers sleeve are spur-type gears. This transmission is also known as the Tremec T-170, HEH, or RUG depending on the year(s) of production. At some point in the early 70's production was moved to Mexico and the name was changed to Tremec.

The term top loader may also be used to distinguish versions of machines with the loading mechanism at the top from other configurations (e.g. front-loading):- 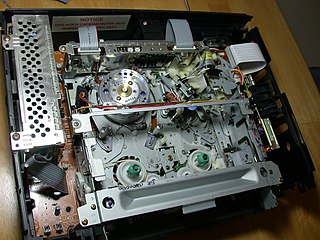 A videocassette recorder, VCR, or video recorder is an electromechanical device that records analog audio and analog video from broadcast television or other source on a removable, magnetic tape videocassette, and can play back the recording. Use of a VCR to record a television program to play back at a more convenient time is commonly referred to as timeshifting. VCRs can also play back prerecorded tapes. In the 1980s and 1990s, prerecorded videotapes were widely available for purchase and rental, and blank tapes were sold to make recordings. 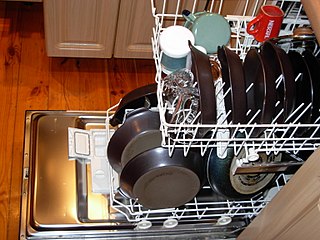 A dishwasher is amachine for cleaning dishware and cutlery automatically. Unlike manual dishwashing, which relies largely on physical scrubbing to remove soiling, the mechanical dishwasher cleans by spraying hot water, typically between 45 and 75 °C, at the dishes, with lower temperatures used for delicate items.

A skid loader, skid-steer loader, skidsteer, or 'bobcat' is a small, rigid-frame, engine-powered machine with lift arms used to attach a wide variety of labor-saving tools or attachments. 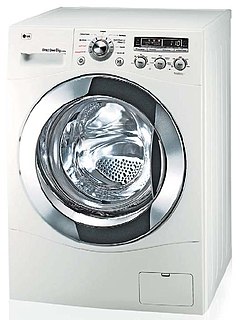 A washing machine is a device used to wash laundry. The term is mostly applied to machines that use water as opposed to dry cleaning or ultrasonic cleaners. The user adds laundry detergent which is sold in liquid or powder form to the wash water.

Frigidaire is the US consumer and commercial home appliances brand subsidiary of European parent company Electrolux. Frigidaire was founded as the Guardian Frigerator Company in Fort Wayne, Indiana, and developed the first self-contained refrigerator in 1916. In 1918, William C. Durant, a founder of General Motors, personally invested in the company and in 1919, it adopted the name Frigidaire. The brand was so well known in the refrigeration field in the early-to-mid-1900s that many Americans called any refrigerator a Frigidaire. The name Frigidaire or its antecedent Frigerator may be the origin of the widely used English word fridge, although more likely simply an abbreviation of refrigerator which is a word known to have been used as early as 1611.

EU Directive 92/75/EC established an energy consumption labelling scheme. The directive was implemented by several other directives thus most white goods, light bulb packaging and cars must have an EU Energy Label clearly displayed when offered for sale or rent. The energy efficiency of the appliance is rated in terms of a set of energy efficiency classes from A to G on the label, A being the most energy efficient, G the least efficient. The labels also give other useful information to the customer as they choose between various models. The information should also be given in catalogues and included by internet retailers on their websites.

Miele is a German manufacturer of high-end domestic appliances and commercial equipment, headquartered in Gütersloh, Ostwestfalen-Lippe, Germany. The company was founded in 1899 by Carl Miele and Reinhard Zinkann, and has always been a family owned and run company.

Crude oil washing (COW) is washing out the residue from the oil tanker using the crude oil cargo itself, after the cargo tanks have been emptied. Crude oil is pumped back and preheated in the slop tanks, then sprayed back via high pressure nozzles in the cargo tanks onto the walls of the tank. Due to the sticky nature of the crude oil, the oil clings to the tank walls, and such oil adds to the cargo 'remaining on board'. By COWing the tanks, the amount of ROB is significantly reduced, and with the current high cost of oil, the financial savings are significant, both for the Charterer and the Shipowner. If the cargo ROB is deemed as 'liquid and pumpable' then the charterers can claim from the owner for any cargo loss for normally between 0.3% up to 0.5%. It replaced the load on top and seawater washing systems, both of which involved discharging oil-contaminated water into the sea. MARPOL 73/78 made this mandatory equipment for oil tankers of 20,000 tons or greater deadweight. 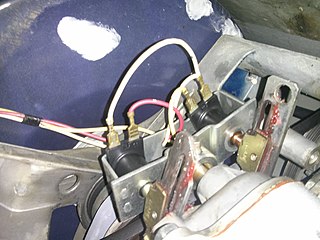 The wig-wag is the common name for the unusual solenoid mechanism used in belt-drive washing machines made by Whirlpool, Kenmore and many others, from approximately 1950 to 1987 in the United States. It was used in belt-drive Brastemp and Consul models built in Brazil from 1959 to 1990. 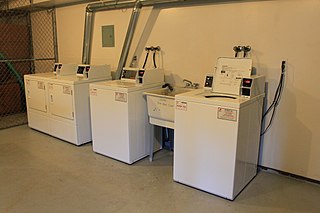 An agitator is a device or mechanism to put something into motion by shaking or stirring. There are several types of agitation machines, including washing machine agitators and magnetic agitators. Agitators can come in many sizes and varieties, depending on the application.

Asko Appliances AB is a Swedish company producing household appliances such as refrigerators, dishwashers and washing machines. It is based in Jung in Vara Municipality in Västergötland. The products continue to be sold in Sweden under the brand ASKO, and are exported under the same name. In North America Asko only imports dishwashers and laundry. Asko is upscale and competes against Bosch, Miele, SMEG, Viking Range, Fulgor and Kitchen Aid. 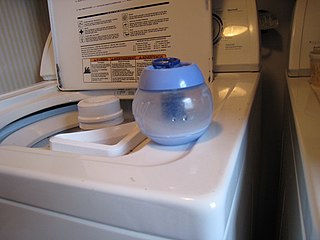 The dispensing ball is a special plastic ball used to dispense liquid fabric softener in clothes washing machines that lack built-in softener dispensers. Liquid fabric softener has to be added at the correct time to a load of laundry in order to work effectively. In top-loading machines, the ball accomplishes this with no user input, other than the initial loading, and filling of the ball.

Candy is a large family-owned Italian company based in Brugherio, near Milan, that manufactures domestic appliances.

Staber Industries, Inc. is a manufacturer of residential laundry home appliances, with headquarters in Groveport, Ohio. The products they currently manufacture include a washing machine, a clothes dryer, and a clothes drying cabinet. 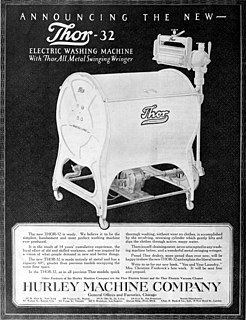 The Thor washing machine was the first electric clothes washer sold commercially in the United States. Produced by the Chicago-based Hurley Electric Laundry Equipment Company, the 1907 Thor is believed to be the first electrically powered washer ever manufactured, crediting Hurley as the inventor of the first automatic washing machine. Designed by Hurley engineer Alva J. Fisher, a patent for the new electric Thor was issued on August 9, 1910, three years after its initial invention.