Around 1840, he also served as the Kapudan Pasha (Grand Admiral) of the Ottoman Navy.[ citation needed ]

Mehmed VI Vahideddin, also known as Şahbaba among Osmanoğlu family, was the 36th and last Sultan of the Ottoman Empire, reigning from 4 July 1918 until 1 November, 1922 when the Ottoman Empire was dissolved after World War I, and was replaced by the Republic of Turkey, on 29 October 1923. The brother of Mehmed V, he became heir to the throne in 1916 after the suicide of Abdülaziz's son, Şehzade Yusuf Izzeddin, as the eldest male member of the House of Osman. He acceded to the throne after the death of Mehmed V. He was girded with the Sword of Osman on 4 July 1918, as the thirty-sixth padishah. His father was Sultan Abdulmejid I and his mother was Gülüstü Hanım She was an ethnic Abkhazian, daughter of Prince Tahir Bey Çaçba and his wife Afişe Lakerba, who was originally named Fatma Çaçba. Mehmed stepped down when the Ottoman Sultanate was abolished in 1922, and the secular Republic of Turkey was created, with Mustafa Kemal Atatürk as the first president. 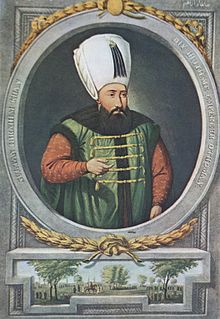 Ibrahim was the Sultan of the Ottoman Empire from 1640 until 1648. He was born in İstanbul, the son of Ahmed I by Valide Kösem Sultan, an ethnic Greek originally named Anastasia.

Mehmed V Reşâd reigned as the 35th and penultimate Ottoman Sultan. He was the son of Sultan Abdulmejid I. He succeeded his brother Abdul Hamid II after the Young Turk revolution. He was succeeded by his brother Mehmed VI. His nine-year reign was marked by the cession of the Empire's North African territories and the Dodecanese Islands, including Rhodes, in the Italo-Turkish War, the traumatic loss of almost all of the Empire's European territories west of Constantinople in the First Balkan War, and the entry of the Ottoman Empire into World War I in 1914, which would ultimately lead to the Empire's end.

Köprülü Mehmed Pasha was the founder of the Köprülü political dynasty of the Ottoman Empire, a family of viziers, warriors, and statesmen who dominated the administration of the Ottoman Empire during the last half of the 17th century, an era known as the Köprülü era. He helped rebuild the power of the empire by rooting out corruption and reorganizing the Ottoman army. As he introduced these changes, Köprülü also expanded the borders of the empire, defeating the Cossacks, the Hungarians, and most impressively, the Venetians. Köprülü's effectiveness was matched by his reputation.

Mehmed Fuad Pasha, sometimes known as Keçecizade Mehmed Fuad Pasha and commonly known as Fuad Pasha, was an Ottoman administrator and statesman, who is known for his prominent role in the Tanzimat reforms of the mid-19th-century Ottoman Empire, as well as his leadership during the 1860 Mount Lebanon civil war in Syria. He represented a modern Ottoman era, given his openness to European-style modernization as well as the reforms he helped to enact.

"Öküz" Mehmed Pasha, also known as Kara Mehmed Pasha or "Kul Kıran" Mehmed Pasha, was an Ottoman statesman, administrator and military figure of the early 17th century who held the office of Grand Vizier twice, the first time from 17 October 1614 to 17 November 1616 and the second time from 18 January 1619 to 23 December 1619. He was also governor of Egypt from 1607 to 1611. Okuz Mehmed's nickname "Kul Kiran" (slavebreaker) came from his success in crushing the mutiny in Egypt during the early 1600s.

Cığalazade Yusuf Sinan Pasha, his epithet meaning "son of Cicala", was an Ottoman Italian statesman who held the office of Grand Vizier for forty days between 27 October to 5 December 1596, during the reign of Mehmed III. He was also a Kapudan Pasha as well as a military general. He was one of the most capable statesmen of the Ottoman Classical Age, having contributed to the eastwards expansion of the empire at the expense of Persia and successfully defending Ottoman Hungary from Habsburg invasion. However, because of court intricacies, he resigned from the Vizierate after just over a month in office. 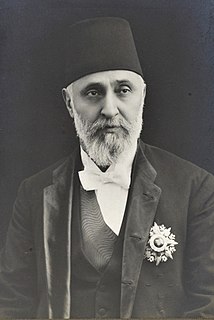 Ahmet Tevfik Pasha, known as Ahmet Tevfik Okday after the Turkish Surname Law of 1934, was an Ottoman statesman of ethnic Crimean Tatar origin. He was the last Grand Vizier of the Ottoman Empire.He held the office three times, the first in 1909 under Abdul Hamid II, and from 1918 to 1919 and from 1920 to 1922 under Mehmed VI during the Allied occupation of Istanbul. In addition to his premiership, Ahmet Tevfik was also a diplomat, a member of the Ottoman Senate, and the Minister of Foreign Affairs.

Mehmed Pasha or Mehmet Pasha may refer to:

Ahmed Izzet Pasha, , known as Ahmet İzzet Furgaç after the Turkish Surname Law of 1934, was an Ottoman general of ethnic Albanian descent during World War I. He was also one of the last Grand Viziers of the Ottoman Empire and its last Minister of Foreign Affairs.

Topal is a Turkish word meaning "lame" and may refer to:

Izzet Pasha may refer to:

Kara Murat Pasha, or Kara Dev Murat Pasha, lit. Courageous Giant Murat Pasha in Ottoman Turkish;, was an Ottoman Albanian statesman and military officer. He served as Kapudan Pasha and twice as Grand Vizier. His epithet Kara ("black") refers to his courage and Dev ("giant") to his physical size.

Koca Dervish Mehmed Pasha was an Ottoman military officer and statesman from Circassia.

Yemen Vilayet was a first-level administrative division (vilayet) of the Ottoman Empire. At the beginning of the 20th century it reportedly had an area of 200,000 square kilometres (77,200 sq mi). The population for the vilayet is given by the 1885 Ottoman census as 2,500,000.

Safranbolulu Izzet Mehmet Pasha was a grand vizier of the Ottoman Empire and served from 1794 to 1798.

Izzet Mehmed Pasha was an Ottoman statesman who served as the Grand Vizier of the Ottoman Empire twice, first from 1774 to 1775, and second from 1781 to 1782.

Izzet Mehmed may refer to:

Izzet Ahmed Pasha, also known as Ahmed Izzet Pasha or Hacı Izzet Pasha or Hakkı Paşazâde Izzet Pasha, was an Ottoman statesman who held a lengthy series of provincial governorships from 1841 to 1870. He was also a vizier.