M/Y A+, formerly known as Topaz, [3] is a luxury motor yacht constructed by Lürssen in Bremen, Germany. [4] The yacht's interior was designed by Terence Disdale Design and the exterior designed by Tim Heywood. The boat was launched in May 2012. [5]

The vessel features a steel displacement hull, an aluminium superstructure and consists of eight decks. [5] This yacht was originally being built in a 169 m (554 ft) dry dock but to complete the project, the yacht had to be taken to a 220 m (720 ft) dock to be built alongside. [7] A+ is also the world’s ninth largest luxury yacht, launched in 2012. [8]

The main engines are twin Pielstick diesel engines, each with power of 7990 hp. This is enough power for the yacht to reach a service speed of 22.9 knots, while the maximum speed is over 25.5 knots. The yacht is also equipped with two diesel generators and an emergency diesel generator. These aggregates provide power to the stabilisers, navigation equipment and all the facilities on board. 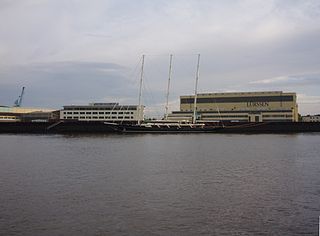 Lürssen is a German shipyard with headquarters in Bremen-Vegesack and shipbuilding facilities in Lemwerder, Berne and Bremen-Aumund.

A superyacht or megayacht is a large and luxurious pleasure vessel. There are no official or agreed upon definitions for such yachts, but these terms are regularly used to describe professionally crewed motor or sailing yachts, ranging from 40 metres (130 ft) to more than 180 metres (590 ft) in length, and sometimes include yachts as small as 24 metres (79 ft).

Limitless is one of the world's largest private superyachts. She was built in 1997 by German shipmaker Lürssen, with exterior design by the noted Jon Bannenberg and collaborator Jonathan Quinn Barnett, and interior design by François Catroux. The overall length is 96.25 m, the width 12.50 m (41 ft.). She is powered by two engines of 5,420 kW each, reaching a speed of 25 knots, and was the first yacht to feature a combination of diesel and diesel-electric propulsion. Limitless is owned by Les Wexner, an American businessman who is currently chairman and CEO of the L Brands corporation.

M/Y Eclipse is a superyacht built by Blohm+Voss of Hamburg, Germany, the fourth longest afloat. Her exterior and interior were designed by Terence Disdale. The yacht was delivered to Russian businessman Roman Abramovich on 9 December 2010. At 162.5 metres long Eclipse was the world's longest private yacht until the Azzam was launched in April 2013, which was 17.3 metres longer. The yacht's cost has been estimated at €340 million. 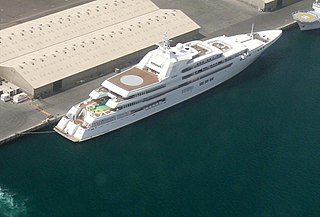 Dubai is the name of a yacht owned by Sheikh Mohammed bin Rashid Al Maktoum, ruler of Dubai and Vice President/Prime Minister of the United Arab Emirates. 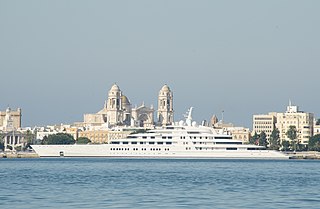 Dilbar is a super-yacht launched on 14 November 2015 at the German Lürssen shipyard and delivered in 2016. It was built as Project Omar. The interior design of Dilbar was designed by Andrew Winch and the exterior by Espen Oeino.

The 66 m (217 ft) superyacht Elysian was launched by Lürssen at their Rendsburg shipyard. The yacht’s exterior is the design work of Espen Øino. Reymond Langton Design was selected by the owner to create the custom interior.

The 123 m (404 ft) superyacht Al Lusail was launched by Lürssen at their yard near Bremen. The yacht’s exterior is the design work of H2 Yacht Design. March & White was selected by the owner to create the custom interior. 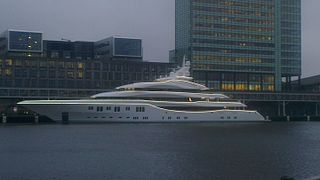 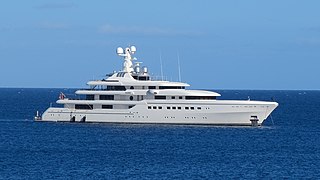 Lady Gulya is an luxury yacht launched by Lürssen at their yard near Rendsburg in 2018 as TIS. Both the yacht's exterior and interior design are the work of Winch Design.

The 135.61 m (444.9 ft) superyacht Crescent was launched by Lürssen at their yard near Rendsburg. The yacht’s exterior design is from Espen Øeino while Zuretti Design is behind the interior design.