Topbaş is a Turkish surname. Notable people with the surname include:

Kadir Topbaş is a Turkish architect, businessman, politician and former mayor of Istanbul Metropolitan Municipality in Turkey from 2004 to 2017.

Osman Nuri Topbaş is a Turkish Sufi master and author who lives in Istanbul, Turkey. He is the spiritual leader of Naqshbandi Sufi Order based in Erenköy, Kadıköy, İstanbul. 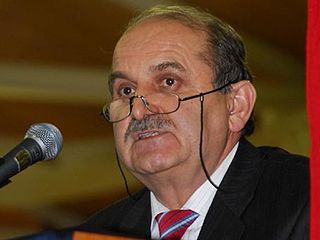 Şaban Erden who was born in Kırklareli in 1949, is the Deputy Secretary General of the Istanbul Metropolitan Municipality.

Esenyurt is a district of the Istanbul Province and is a part of the metropolitan municipality of Istanbul. Located in the European side of Istanbul, Esenyurt borders with Avcılar and Lake Küçükçekmece on the east, Büyükçekmece on the west, Başakşehir, Arnavutköy and TEM road on the north and Beylikdüzü and E-5 motorway on the south. The district covers an area of 2.770 hectares and has its own municipality since 1989.

A Turkish name consists of an ad or an isim and a soyadı or soyisim (surname). Turkish names exist in a "full name" format. While there is only one soyadı (surname) in the full name there may be more than one ad. Married women may carry both their maiden and husband's surnames. The soyadı is written as the last element of the full name, after all given names.

Recep Altepe, is a Turkish politician and the current mayor of Bursa.

Kadir is the primary transliteration of two Arabic male given names and. It's also one of the names of God in Islam, meaning "Almighty". 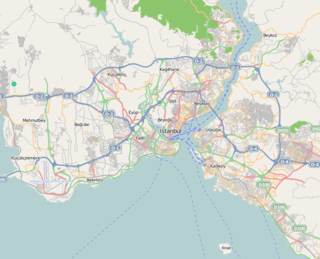 Aşiyan Museum is the house of famous Turkish poet Tevfik Fikret (1867–1915) at Aşiyan neighborhood of Beşiktaş district in Istanbul. It was built in 1906 and later in 1945 converted to a museum. The museum is owned by the Istanbul Metropolitan Municipality.

Osman Nuri may refer to:

The Istanbul mayoral election, 2009 for the office of mayor of the Istanbul Metropolitan Municipality was held on 29 March 2009 and was won by the Justice and Development Party candidate, the incumbent Kadir Topbaş.

The Bosphorus Water Tunnel or Bosporus aqueduct is an under sea aqueduct in Istanbul, Turkey, crossing the Bosphorus strait. It was constructed in 2012 to transfer water from the Melen Creek in Düzce Province to the European side of Istanbul. 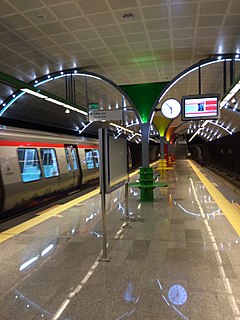 Line M6, officially referred to as the M6 Levent – Hisarüstü/Boğaziçi Üniversitesi line, is a 3.3-kilometre (2.1 mi) light metro line of the Istanbul Metro. The line opened for public service on 19 April 2015. Except for the very small Tünel, this line is the shortest of the Istanbul Metro system with only four stations.

The Istanbul mayoral elections of 2014 were held on 30 March 2014 as part of the local elections taking place throughout Turkey on the same day. The Metropolitan Mayor of Istanbul as well as the district mayors of the 39 districts of Istanbul were elected, along with municipal councillors for each district municipality. The metropolitan municipality race was one of the most high-profile and close watched elections in the country, with the Justice and Development Party (AKP) candidate Kadir Topbaş being re-elected for a third consecutive term as mayor with 47.9% of the vote. Mustafa Sarıgül, the Republican People's Party (CHP) candidate, came second with 40% of the vote.

Kadıköy is the western terminal station on the M4 line of the Istanbul Metro. Located beneath Haydarpaşa Rıhtım Caddesi (Street) it is serviced by the M4 between 6:00 and 0:04. The station has two tracks serving an island platform. Kadıköy opened on 17 August 2012 along with fifteen other stations on the M4 line. The Turkish Prime Minister Recep Tayyip Erdoğan along with the Mayor of Istanbul, Kadir Topbaş and other members of government inaugurated the line from Kadıköy and boarded a train to Kartal.

Mustafa Latif Topbaş is a Turkish businessman whose net worth was $1.2bn in 2018.

Mevlüt Uysal is a Turkish politician and lawyer who was the mayor of Istanbul Metropolitan Municipality from September 2017 to April 2019.

Ekrem İmamoğlu is a Turkish politician serving as the 32nd and current Mayor of Istanbul since 2019. He was first elected in the March 2019 mayoral election as the joint Nation Alliance candidate of the Republican People's Party (CHP) and the İYİ Party, but served only from 17 April 2019 until 6 May 2019, when the election was annulled. He was then reelected in a renewed election on 23 June 2019. He had previously been the Mayor of Beylikdüzü, a western district of Istanbul, between 2014 and 2019.