Topchubashi (also spelled Topchubashov / Topchubashev)(in Azeri meaning Man in charge of cannons) is one of the noble families of Azerbaijan, roots of which comes from 15th-century Ganja and derives its name from its founder’s being in charge of the cannons in the Ganja garrison. In the midst of the 18th century one of the Topchubashis, Agha bey moved to Erevan, thus splitting the family into two major branches – Ganja branch and Erevan branch.

At the second half of the 18th century, Alimardan bey Topchubashi was the prominent member of the Ganja branch of this family, first being in charge of Ganja Khanate’s relations and correspondence with Russia, then moving to Tiflis in 1795 and becoming Georgia’s official responsible for relations with Iran. But despite all efforts of diplomacy, even Russian protectorate over Georgia couldn’t save kingdom and its capital Tiflis from Iranian king Agha Mohammad Shah Gajar’s assault. On September 11, 1795 the Iranian army entered Tiflis. Plunder of the city went on eight days and regardless of their faith all city dwellers were taken captives. It was in that days that Alimardan bey’s daughter was lost and son Jafar (future Mirza Jafar Topchubashev, Russian Orientalist of Azerbaijani origin, employee of Russian Foreign Ministry and professor of Petersburg University) hardly escaped captivity and hid in Alabno monastery.

Later Jafar Topchubashev continued his education in Tiflis, and joined the retinue of Georgian prince Teimuraz Bagrationi and accompanied him to St.Petersburg. There, Mirza Jafar and Teimuraz translated the Psalter into Russian and also compiled Italian-Persian-Turkic dictionary. In 1812 Mirza Jafar enrolled into Russian Foreign Ministry, in 1819 he started to teach Persian in General Pedagogical Institute and in 1823 became professor of Petersburg university.

Another famous Topchubashi was Alimardan Topchubashev, Ambassador of Azerbaijan Democratic Republic to Ottoman Empire, Georgia and Armenia, then Minister of Foreign affairs (6 October-7 December 1918), Speaker of Azerbaijani Parliament in absentia (December 7, 1918 – 27 April 1920) and at the same time Head of the Azerbaijani Delegation to Paris Peace Conference (1919).

The Battle of Krtsanisi was fought between the Qajar Iran (Persia) and the Georgian armies of the Kingdom of Kartli-Kakheti and Kingdom of Imereti at the place of Krtsanisi near Tbilisi, Georgia, from September 8 to September 11, 1795, as part of Agha Mohammad Khan Qajar's war in response to King Heraclius II of Georgia’s alliance with the Russian Empire. The battle resulted in the decisive defeat of the Georgians, capture, and complete destruction of their capital Tbilisi, as well as the temporary absorption of eastern parts of Georgia into the Iranian Empire.

Prince Alexander of Georgia (1770–1844) was a Georgian royal prince of the Bagrationi family, who headed several insurrections against the Russian rule in Georgia. He was known as Eskandar Mīrzā (اسکندرمیرزا) in the Persian Empire, Tsarevich Aleksandr Irakliyevich in Russia, and as Alexander Mirza in Western Europe. 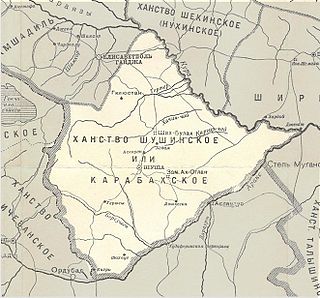 The Karabakh Khanate was a semi-independent Turkic khanate, a political entity ruled by a khan, on the territories of modern-day Armenia and Azerbaijan established in about 1748 under Iranian suzerainty in Karabakh and adjacent areas.

The Azerbaijan Democratic Republic, was the third secular democratic republic in the Turkic and Muslim worlds, after the Crimean People's Republic and Idel-Ural Republic. The ADR was founded by the Azerbaijani National Council in Tiflis on 28 May 1918 after the collapse of the Russian Empire. Its established borders were with Russia to the north, the Democratic Republic of Georgia to the north-west, the First Republic of Armenia to the west, and Iran to the south. It had a population of around 3 million. Ganja was the temporary capital of the Republic as Baku was under Bolshevik control. The name of "Azerbaijan" which the leading Musavat party adopted, for political reasons, was, prior to the establishment of the Azerbaijan Democratic Republic in 1918, exclusively used to identify the adjacent region of contemporary northwestern Iran.

The Russo-Persian Wars or Russo-Iranian Wars were a series of conflicts between 1651 and 1828, concerning Persia (Iran) and the Russian Empire. Russia and Persia fought these wars over disputed governance of territories and countries in the Caucasus. The main territories disputed were Aran, Georgia and Armenia, as well as much of Dagestan – generally referred to as Transcaucasia – and considered part of the Safavid Iran prior to the Russo-Persian Wars. Over the course of the five Russo-Persian Wars, the governance of these regions transferred between the two empires. Between the Second and Third Russo-Persian Wars, there was an interbellum period in which a number of treaties were drawn up between the Russian and the Persian Empires, as well as between both parties and the Ottoman Empire. Ottoman interest in these territories further complicated the wars, with both sides forming alliances with the Ottoman Empire at different points throughout the wars. Following the Treaty of Turkmenchay, which concluded the Fifth Russo-Persian War, Persia ceded much of its Transcaucasian territory to the Russian Empire.

Alimardan Alakbar oglu Topchubashov was a prominent Azerbaijani politician, foreign minister and speaker of the Parliament of Azerbaijan Democratic Republic.

Fatali Khan Isgender oglu Khoyski was an Azerbaijani attorney, a member of the Second State Duma of the Russian Empire, Minister of Internal Affairs, Minister of Defense and, later the first Prime Minister of the independent Azerbaijan Democratic Republic.

The Nakhchivan Khanate was a khanate that was established in Afsharid Persia in 1747. The territory of the khanate corresponded to most of the present-day Nakhchivan Autonomous Republic and Vayots Dzor Province of present-day Armenia. It was named after its chief settlement, the town of Nakhchivan.

Azerbaijani National Council was the first delegated legislative body of the Azerbaijan Democratic Republic (ADR) from 27 May 1918 to 17 June 1918 and again from 16 November 1918 to 3 December 1918. It was succeeded by the Parliament, a legislative body formed through nationwide general elections.

Ibrahim Khalil khan Javanshir (1732–1806) was an Azeri Turkic khan of the Karabakh Khanate from the Javanshir family, who succeeded his father Panah-Ali khan Javanshir as the ruler of the khanate.

Panah-Ali Khan Javanshir was the founder and first ruler of the Karabakh Khanate under Persian suzerainty. 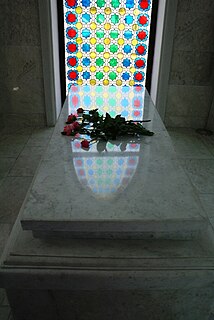 Jafar al-Javad Khan Ziyad oghlu Qajar was a member of the Qajar dynasty, and the last khan of the Ganja khanate from 1786 to 1804.

Bahman Mirza was a Persian prince of the Qajar Dynasty, son of Abbas Mirza and grandson of Fath Ali Shah. He was Vicergerent (vali) of Azerbaijan and Governor-General of Tabriz. He later migrated to neighboring Imperial Russia, where he was received with great honor and lived a prestigious life in Shusha. Many of his offspring either returned to Iran where they had political or military careers, or served in the Russian military, and later played an important role in the military of Azerbaijan Democratic Republic. Beside political figures, he is also the great grandfather of Afrasiyab Badalbeyli, Azerbaijani composer and author of the first Azeri balet and the first ballet in the Muslim East.

Qajar Iran, also referred to as Qajar Persia, the Qajar Empire, officially the Sublime State of Persia and also known then as the Guarded Domains of Persia, was an Iranian empire ruled by the Qajar dynasty, which was of Turkic origin, specifically from the Qajar tribe, from 1789 to 1925. The Qajar family took full control of Iran in 1794, deposing Lotf 'Ali Khan, the last Shah of the Zand dynasty, and re-asserted Iranian sovereignty over large parts of the Caucasus. In 1796, Mohammad Khan Qajar seized Mashhad with ease, putting an end to the Afsharid dynasty, and Mohammad Khan was formally crowned as Shah after his punitive campaign against Iran's Georgian subjects. In the Caucasus, the Qajar dynasty permanently lost many of Iran's integral areas to the Russian Empire over the course of the 19th century, comprising modern-day Georgia, Dagestan, Azerbaijan and Armenia. 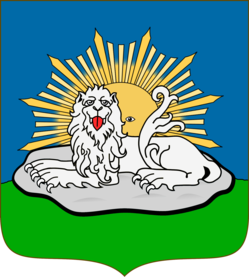 The Bahmani family, also Bahmani-Qajar is an aristocratic Persian family belonging to one of the princely families of the Qajar dynasty, the ruling house that reigned Iran 1785–1925. The founder is Bahman Mirza Qajar (1810–1884), younger brother of Mohammad Shah Qajar and formerly prince regent and governor of Azerbaijan 1841–1848.

Mirza Jafar Topchubashev was a Russian orientalist scholar and poet of Azerbaijani origin. He also worked as privy councillor for sometime alongside teaching Oriental Languages at History-Philology Faculty of Saint Petersburg State University since 1819. He was a member of Royal Asiatic Society, as well as teacher of Aleksander Chodźko, Alexander Griboyedov and Vasili Grigoryev, who would be appointed as Imperial Censor of Russia.