The Asheville Tourists are a minor league baseball team based in Asheville, North Carolina. They play in the Class A South Atlantic League and have been a farm team of the Colorado Rockies since 1994.

The Illinois–Indiana–Iowa League was a Minor League Baseball organization that operated for the better part of 60 years, mostly in those three states. The league began play in 1901 and disbanded after the 1961 season. It was popularly known as the Three–I League and sometimes jokingly as the Three-Eye League.

The Western League was the name of several leagues in American minor league baseball. First, its earliest progenitor, which existed from 1885 to 1899, was the predecessor of the American League. Later, during the 20th century, there were four incarnations of the Western League, including a Class D loop that played from 1939–41 and an independent loop that began play in 1995. This article, however, concentrates on the two Class A leagues that played from 1900–37 and from 1947–58.

The Western Association was the name of five different leagues formed in American minor league baseball during the 19th and 20th centuries. 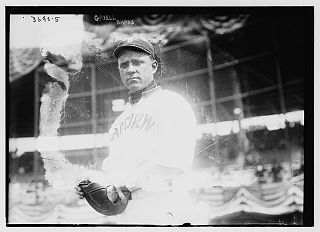 Isaac Morgan "Ike" Boone was an American professional baseball player. He played eight seasons as a right fielder in Major League Baseball (MLB) between 1922 and 1932 for the New York Giants, Boston Red Sox, Chicago White Sox, and Brooklyn Robins/Dodgers. His older brother, Dan, also played in the major leagues from 1919 to 1923.

The Southwestern League was the name of four former minor league baseball leagues that operated in the Southwestern United States. The second league, also known as the Oklahoma State League, was in operation for the 1904 season. The third league operated from 1921 to 1926. The fourth league, formerly the Longhorn League, operated from 1956 to 1957 before changing its name to the Sophomore League.

George Wuestling, sometimes referred to as "Yats" or "Yatz", was an American baseball player. A native of St. Louis, Missouri, he played professional baseball, primarily as a shortstop, from 1924 to 1934, including two seasons in Major League Baseball with the Detroit Tigers in 1929 and 1930 and with the New York Yankees in 1930. He compiled a .189 batting average in 83 major league games. He also played several years in the minor leagues, including three years for the Terre Haute Tots from 1925 to 1927 and three years for the Portland Beavers in 1928, 1929 and 1931.

The Tulsa Oilers, located in Tulsa, Oklahoma, were a minor league baseball team that existed on-and-off in multiple leagues from 1905 to 1976. For most of their history, they played at Oiler Park, which opened on July 11, 1934, and was located on the Tulsa County Fairgrounds at 15th Street and Sandusky Avenue.

Maurice F. "Jack" Mealey was a long-time minor league baseball catcher, who also managed in the minor leagues and served as president of the Sooner State League for five years. He was born in Glen Carbon, Pennsylvania.

Harry Strohm played and managed in minor league baseball from the 1920s to the 1950s. He ranks second all-time in career minor league hits with 3,486, behind only Spencer Harris. He ranks first in hits among all minor leaguers with no major league playing experience.

The Paris Orioles was the final and a primary name of the minor league baseball franchise based in Paris, Texas from 1955–1957. Paris hosted teams in various leagues between 1896–1957. The Paris Orioles played in the Sooner State League League (1955–1957) and were an affiliate of the Baltimore Orioles (1955–1957).

The Salina Blue Jays was the final moniker of minor league baseball teams based in Salina, Kansas between 1898–1952. The Salina Blue Jays played from 1946–1952 as a member of the Class C Western Association and an affiliate of the Philadelphia Phillies (1946–1952).