Topi Patuki (1810–1900) was a New Zealand Māori leader, whaler, goldminer and storekeeper. Of Māori descent, he identified with the Ngati Mamoe iwi. He was born in Waipahi, West Otago, New Zealand in about 1810. [1] 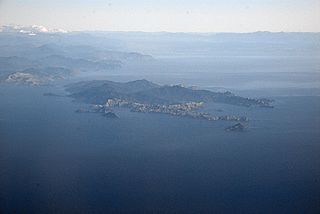 Rangitoto ki te Tonga / D'Urville Island is an island in the Marlborough Sounds along the northern coast of the South Island of New Zealand. It was named after the French explorer Jules Dumont d'Urville. With an area of approximately 150 square kilometres (58 sq mi), it is the eighth-largest island of New Zealand, and has around 52 permanent residents. The local authority is the Marlborough District Council.

The Boyd massacre occurred in December 1809 when Māori residents of Whangaroa Harbour in northern New Zealand killed and ate between 66 and 70 Europeans. This is reputedly the highest number of Europeans killed by Māori in a single event in New Zealand, and the incident is also one of the bloodiest instances of cannibalism on record. The massacre is thought to have been in revenge for the whipping of a young Māori chief by the crew of the sailing ship Boyd.

Ruapuke Island is one of the southernmost islands in New Zealand's main chain of islands. It lies 15 kilometres (9.3 mi) to the southeast of Bluff and 32 kilometres (20 mi) northeast of Oban on Stewart Island/Rakiura. It was named "Bench Island" upon its discovery by Captain James Cook in 1770, but has rarely been known by any other name than its Māori name, which means "two hills". The island covers an area of about 16 km2 (6 sq mi). It guards the eastern end of Foveaux Strait.

The following lists events that happened during 1900 in New Zealand. 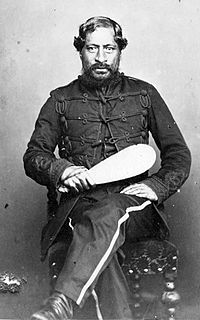 A patu is a club or pounder used by the Māori. The word patu in the Māori language means to strike, hit, beat, kill or subdue.

The following lists events that happened during 1826 in New Zealand.

The following lists events that happened during 1817 in New Zealand.

There are still far fewer ships visiting New Zealand than before 1810. This is due to the economic depression which started in New South Wales in 1810 and continues until 1815. The concern that the Boyd massacre might be repeated abates somewhat as a number of reports that it was provoked reach Port Jackson. As more ships resume visits to the Bay of Islands they consistently report that they are well treated.

The Sealers' War (1810-1821) in southern New Zealand, also known as the "War of the Shirt", was a series of often indiscriminate attacks and reprisals between Māori and European sealers. Initially minor misunderstandings between the two peoples quickly led to armed conflict. This resulted in a period of mistrust and animosity between Māori and sealers fueling several conflicts, leading to the deaths of about 74 people and the burning of the village of Otakou on the Otago Peninsula. Records exist from both sides of the conflict but not from any impartial observers. 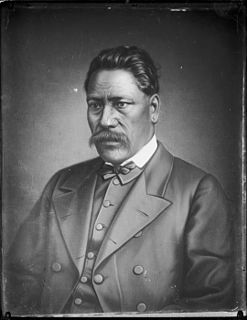 Tareha Te Moananui was a principal chief of the Ngāti Kahungunu iwi, and a Māori member of Parliament in New Zealand from 1868 to 1870.

The Māori are the indigenous Polynesian people of mainland New Zealand. Māori originated with settlers from eastern Polynesia, who arrived in New Zealand in several waves of waka (canoe) voyages between roughly 1320 and 1350. Over several centuries in isolation, these settlers developed their own distinctive culture, whose language, mythology, crafts and performing arts evolved independently from those of other eastern Polynesian cultures. Some early Māori moved to the Chatham Islands where their descendants became New Zealand's other indigenous Polynesian ethnic group, the Moriori.

Te Pahi (?–1810) was a Māori tribal leader and traveller from New Zealand. He was from the Ngāpuhi iwi and lived in the Rangihoua Bay area of the Bay of Islands.

William Alexander Ott (1872–1951) was Mayor of Invercargill 1910–1912. During his mayoralty, the Invercargill tram network was opened.

JohnFrederick Henry Wohlers was a Lutheran missionary from Germany who lived for 41 years on Ruapuke Island, a small island in New Zealand's far south.

Māori Indians are an ethnic group in New Zealand of people with mixed Māori and Indian ancestry. 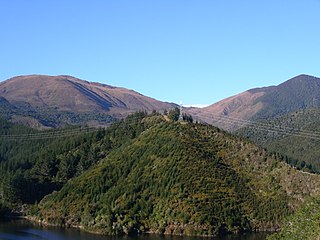