Sorsakoski started his career together with his brother, Antti, who had played in various bands together with Juice Leskinen, in the Kalle Kiwes Blues Band. Some of Sorsakoski's cousins are also musicians: Seppo Tammilehto, who played in Alwari Tuohitorvi and later had a solo career; and Juhani Tammela, who has played old dancehall music in his quintet in the 1960s. Next Sorsakoski worked as the guitarist in the band The Boys. [ citation needed ] 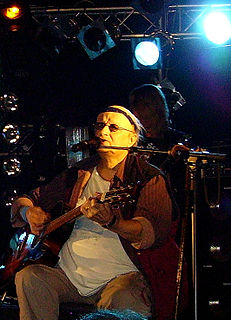 Juhani Juice Leskinen, better known as Juice Leskinen, was one of the most prominent Finnish singer-songwriters of the late 20th century. From the early 1970s onward he released nearly 30 full-length albums, as well as writing song lyrics for dozens of Finnish artists. Several of Leskinen's songs have reached classic status in Finnish popular music, e.g., "Viidestoista yö", "Kaksoiselämää" and "Syksyn sävel". His early records are considered staples of the so-called Manserock movement of the mid-'70s. In addition to Leskinen's musical work, he extended his focus to poetry and playwriting with nine collections of verse and seven plays published.

In the 1980s, he started performing together with the band Agents, also singing songs earlier performed by Olavi Virta. Sorsakoski later had a solo career and also worked with the band Kulkukoirat. He returned to for a time to the Agents beginning in May 2007.[ citation needed ] 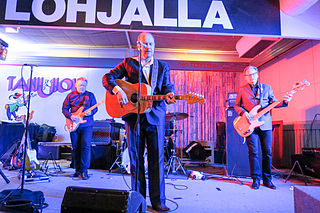 Agents is a Finnish band formed in 1979, playing rautalanka, schlager and rock'n'roll music. The head figure and musical director of the band is solo guitarist Esa Pulliainen.

Olavi Virta was a Finnish singer, acclaimed as the king of Finnish tango. Between 1939 and 1966 he recorded almost 600 songs, many of which are classics of Finnish popular music, and appeared in many films and theatrical productions. Of his most acclaimed tangos are Punatukkaiselle tytölleni , Ennen kuolemaa and Täysikuu , while standouts from his other popular music are Poika varjoisalta kujalta (Guaglione), Hopeinen kuu, , Eva and Kultainen nuoruus . He was also the second tenor of the quartet Kipparikvartetti in the early 1950s.

Sorsakoski died on Saturday, 13 August 2011 at Seinäjoki Central Hospital. He was 58 years old and had suffered from lung cancer. [1] 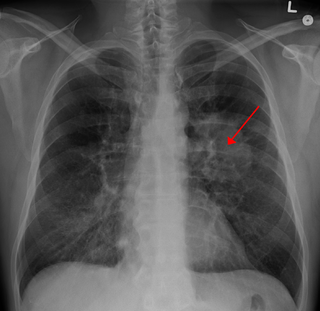 Reijo Taipale is a Finnish pop singer since the 1950s specializing in Schlager music and tango. Many of his albums have gone gold and platinum. Throughout the 1970s, he collaborated closely with Eino Grön with the two releasing four joint tango-based albums. 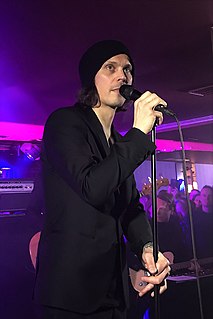 Ville Hermanni Valo is a Finnish singer, songwriter and musician, best known as the lead vocalist of the gothic rock band HIM. Influenced by the likes of Black Sabbath and Type O Negative, Valo began his career playing bass and drums in various bands around his hometown of Helsinki. In 1991, he formed HIM, which would go on to become one of the most successful Finnish bands of all time, and the first to receive a gold record in the United States. Valo is also credited as the creator of the heartagram, the band's trademarked symbol. In 2017, HIM announced their plans to retire following a farewell tour that same year. The band played their final show on New Year's Eve 2017. 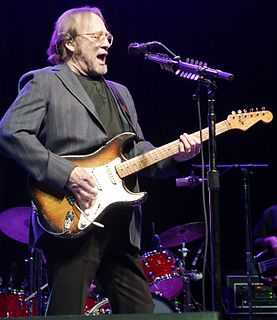 Stephen Arthur Stills is an American singer, songwriter, and multi-instrumentalist best known for his work with Buffalo Springfield and Crosby, Stills, Nash & Young.

Ähtäri is a town and municipality of Finland.

"Bésame Mucho" is a song written in 1940 by Mexican songwriter Consuelo Velázquez. A famous version is sung by Trio Los Panchos.

Jani Lane was an American recording artist and the lead vocalist, frontman, lyricist and main songwriter for the glam metal band Warrant. From Hollywood, California, the band experienced success from 1989–1996 with five albums reaching international sales of over 10 million. Lane left Warrant in 2004 and again in 2008 after a brief reunion. Lane also released a solo album Back Down to One in 2003 and the album Love the Sin, Hate the Sinner with a new group Saints of the Underground in 2008. Lane contributed his lead vocals and song writing to many various projects throughout his career.

Lou Gramm is an American rock singer-songwriter, best known for being the original lead singer of the British-American rock band Foreigner. 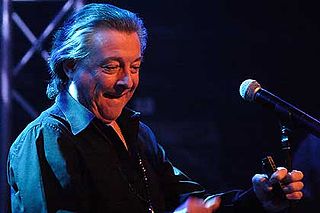 Kirill "Kirka" Babitzin was one of the most commercially successful Finnish musicians. His career spanned from the late 1960s right up to his death in 2007. 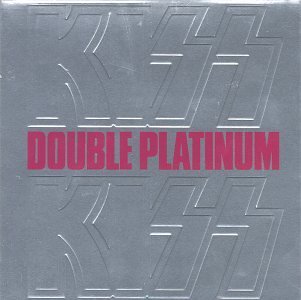 Double Platinum is the first greatest hits album by the American hard rock band Kiss, released in 1978. Many of the songs on Double Platinum were remixed and differ from their original versions: in the case of "Strutter," it was re-recorded with a slight disco beat and dubbed as "Strutter '78." Other songs had sections completely removed, while the beginning of "Black Diamond" was repeated at the end, fading out at the start of the first verse and giving the song a "wrap around" feel. The overall sound of the album is slightly flat and compressed, to give a similar sound to the varying productions of each track which are taken from the albums between the years 1974 up to 1977. 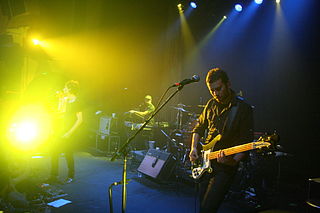 Zoé is a Grammy Award and Latin Grammy Award-winning Mexican rock band. They initially formed in Mexico City in 1994, although membership started to stabilize in 1997. The band has achieved success in Mexico and most Spanish-speaking countries with albums such as Rocanlover, Memo Rex Commander y el Corazón Atómico de la Vía Láctea and Reptilectric.

Yö was a Finnish rock band, formed in 1981 at Pori, Finland.

Sunrise Avenue is a Finnish rock band originally formed in 2002 in Helsinki, Finland. In the early days the band was called Sunrise and the name was changed to Sunrise Avenue in 2003. Sunrise Avenue was known for their catchy melodic and modern songs and energetic live performances. Their style varied from rock and pop-rock to rock ballads. The band sold more than 2,000,000 albums and 2,000,000 singles and played several tours and more than a thousand shows in twenty European countries and Japan. Sunrise Avenue's best known songs are "Hollywood Hills" (2011), "Fairytale Gone Bad" (2006), "Forever Yours" (2007), "The Whole Story" (2009), "Heal Me" (2007) and "Welcome To My Life" (2009). The band released five studio albums, two live albums, three live DVDs, a best-of album and 18 singles.

Pekka Juhani "Pave" Maijanen is a Finnish musician, who has worked as a singer, songwriter, bass player, keyboard player, drummer, guitarist and producer during his long career. As well as his solo career, Maijanen was a member of The Royals, Rock'n'Roll Band, Pepe & Paradise and he was the keyboard player and producer of Dingo and the Hurriganes. Maijanen's first work as a producer was for the album Nuclear Nightclub by Wigwam. 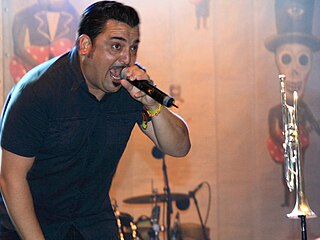 Olli Haavisto is a Finnish musician best known for playing the pedal steel guitar and the guitar. He is one of the most respected pedal steel guitarists in Finland, and he has worked as a session musician for numerous Finnish artists.