Topik Petang is the main news program of the antv, broadcast Monday to Friday at 18:30, Saturday and Sunday at 17:30. 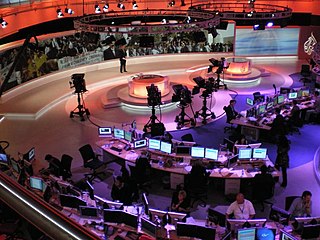 antv is an Indonesian free-to-air television network based in South Jakarta. It is owned by Visi Media Asia.

It broadcasts at different hours on antv is the schedule of some sporting events that the channels broadcast interfere with the usual TV schedule.

Caracol Televisión is a Colombian free-to-air television network, owned by the Grupo Valorem.

Commercial broadcasting is the broadcasting of television programs and radio programming by privately owned corporate media, as opposed to state sponsorship. It was the United States′ first model of radio during the 1920s, in contrast with the public television model in Europe during the 1930s, 1940s and 1950s which prevailed worldwide until the 1980s.

Indosiar is an Indonesian television station. It broadcasts nationwide on UHF and is able to be received throughout the Indonesian archipelago on analog PAL television sets, established on January 11, 1995. It is owned by Elang Mahkota Teknologi since 2011 and eventually operated under its subsidiary, Surya Citra Media since May 1, 2013.

The Test of Proficiency in Korean (TOPIK) is a Korean language test for nonnative speakers of Korean. The test is offered six times annually within Korea and less often to people studying Korean in other countries. The test is for individuals whose first language is not Korean and is taken by overseas ethnic Koreans, those wishing to study at a Korean university, and for those who want to be employed at Korean companies in and outside of Korea. TOPIK is administered by the National Institute for International Education.

BeritaSatu is an Indonesian talk channel that was BeritaSatu News Channel established in early 1998 by PT Jaring Data Interaktif. Much of the channel's content is targeted towards Indonesian executives and the influential upper income segment of society. Aimed at decision makers, the channel mostly features talk shows and infotainment programs related to business, economy, politics, lifestyle, and entertainment.

Liputan 6 is a flagship television news program that broadcasts on the Indonesian TV station SCTV. Its slogan is "Aktual, Tajam, dan Terpercaya".

tvOne is an Indonesian privately owned national television station based in East Jakarta. It used to be known as Lativi, but changed its name after an ownership swap in February 2008. tvOne is owned by and Visi Media Asia.

Topik or topig is an Armenian dish, sometimes thought of as a vegetarian meatball, consisting of a chickpea- based paste, usually mixed with potatoes or flour, surrounding a filling of onions, nuts, and currants, and flavored with herbs, spices, and tahini.

In Colombian broadcasting, a programadora was a company that produced television programs, especially for the public-commercial Canal Uno.

The New Eat Bulaga! Indonesia was a variety and game show In Indonesia produced by Television and Production Exponents (TAPE) Inc., and last aired by antv Network. It was based on the Philippines' longest-running noon-time variety show, Eat Bulaga!, which made it the first Philippine TV show to be franchised in another country. Its first incarnation, Eat Bulaga! Indonesia, premiered on July 16, 2012 and ended on April 3, 2014, which aired on its original network SCTV. The show returned on its second network, antv from November 17, 2014 to August 8, 2016 with a mix of original and new hosts.

Visi Media Asia is a business subsidiary of Bakrie Global Ventura of Bakrie Group. It started as an agribusiness organization in 1951 and expanded into telecommunications, media, metal, and coal mining industries. According to the 2011 edition of Forbes magazine, Aburizal Bakrie, the founder of the Bakrie Group, was the 30th richest person in Indonesia. He was also a potential presidential candidate for the Golkar Party.

OrangeTV is a subscription-based direct broadcast satellite (DBS) or direct-to-home satellite television operated by PT Mega Media Indonesia, subsidiary of the MEI. Orange TV has operated nationwide in Indonesia since 2012.

Take Me Out Indonesia is reality show based on the format of Taken Out and aired by Indosiar from the date of June 19, 2009 until 2013, and then aired by antv from 19 September 2016 until present. Take Me Out Indonesia is a search-themed event and broadcast partner for 2 hours. In this event, the 30 single women standing behind the podium pick 7 single men, introduced one by one. In 2016, the event is back again but this time is shown on antv because a TV station which is usually a TMOI broadcasting rights for approximately 4 years (2009-2013), Indosiar choose to stop contracts and chose to focus on the program "dangdut".

The Korean Government Scholarship Program, or KGSP, is an academic scholarship funded and managed by the National Institute for International Education Development (NIIED), a branch of the Ministry of Education in South Korea. This scholarship provides non-Korean scholars with the funding and opportunity to conduct undergraduate or postgraduate level studies in South Korea after completing one year of intensive Korean language studies. Since its conception in 1967, over 3,000 students from 148 countries have successfully completed the scholarship program.

Lintas (Across) is Indonesia's longest-running flagship newscast carried by a private television station. It was first broadcast on MNC TV in 1996.