Topkapı—Ulubatlı is an underground station on the M1 line of the Istanbul Metro. [2] It is located in eastern Fatih between the neighborhoods of Karagümrük and Topkapı in Istanbul. An out-of-system transfer to Vatan station on the T4 light-rail line is available as well as connections to İETT city buses. Topkapı—Ulubatlı was opened on 3 September 1989 as part of the first rapid transit line in Istanbul as well as Turkey and is one of the six original stations of the M1 line. The station is right next to the Byzantine-era Theodosian Walls of Constantinople. The station gets part of its name from the 15th century soldier, Ulubatlı Hasan who was one of the first Ottoman soldiers to scale the walls during the Fall of Constantinople.

Ahmed I was the Sultan of the Ottoman Empire from 1603 until his death in 1617. Ahmed's reign is noteworthy for marking the first breach in the Ottoman tradition of royal fratricide; henceforth Ottoman rulers would no longer systematically execute their brothers upon accession to the throne. He is also well known for his construction of the Blue Mosque, one of the most famous mosques in Turkey.

Giovanni Giustiniani Longo was a Genoese captain, a member of one of the greatest families of the Republic of Genoa, a kinsman to the powerful house of Doria in Genoa, and protostrator of the Eastern Roman (Byzantine) Empire. He led 700 professional soldiers, both Genoese and Greeks from the island of Chios, which at the time was part of the Republic of Genoa, to the defense of Constantinople against the Ottoman army of Sultan Mehmed II in 1453. He personally financed, organized and led this expedition on his own initiative, and upon arriving was placed in command of the land defenses by Emperor Constantine XI Palaiologos of the Byzantine Empire. Giustiniani was key in controlling the land forces and keeping the Greeks, Genoese and Venetians from quarrelling with each other, and instead kept focused on repairing the land walls after the Ottoman cannons had shot holes in them. It was at least partly because of Giustiniani's charisma that the Byzantine forces were able to hold out so long against overwhelming odds.

Ulubatlı Hasan, Hasan of Ulubat was a Timarli Sipâhî in the service of Sultan Mehmed II of the Ottoman Empire who achieved legendary status as a heroic Turkish martyr at the successful Siege of Constantinople. 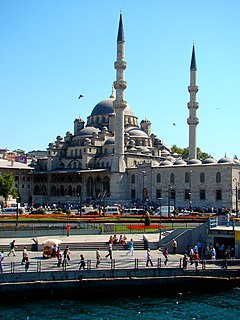 Eminönü is a former district of Istanbul in Turkey, currently a quarter within the Fatih district, which is the capital district of Istanbul and of Istanbul Province. Eminönü covers roughly the area on which the ancient city of Byzantium was built. The Galata Bridge crosses the Golden Horn and connects Karaköy at north with Eminönü at south. Eminönü is located at the point where the Golden Horn connects with the southern entrance of the Bosphorus strait, near the Sea of Marmara. Up on the hill stands Topkapı Palace, the Blue Mosque and Hagia Sophia. It was a part of the Fatih district until 1928, which covered the whole peninsular area within the Roman city walls - that area which was formerly the Byzantine capital Constantinople. Since the resident population of Eminönü is low today, it rejoined the capital district Fatih in 2009.

Public transport in Istanbul comprises a bus network, various rail systems, funiculars, and maritime services to serve the more than 13 million inhabitants of the city spread over an area of 5712 km².

Hagia Irene or Hagia Eirene, sometimes known also as Saint Irene, is an Eastern Orthodox church located in the outer courtyard of Topkapı Palace in Istanbul. It is one of the few churches in Istanbul that has not been converted into a mosque, as it was used as an arsenal for storing weapons until the 19th century. The Hagia Irene today operates as a museum and concert hall.

Istanbul, formerly Byzantium and Constantinople, is the most populous city in Turkey and the country's economic, cultural and historic center. The city straddles the Bosphorus, and lies in both Europe and Asia, with a population of over 15 million residents. Istanbul is the largest city in Europe, and the world's fifteenth-largest city.

The Istanbul Metro is a rapid transit railway network that serves the city of Istanbul, Turkey. It is operated by Metro Istanbul, a public enterprise, controlled by the Istanbul Metropolitan Municipality. The oldest section of the metro is the M1 line, which opened in 1989; it now includes 104 stations in service, with 64 more under construction. 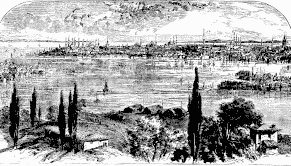 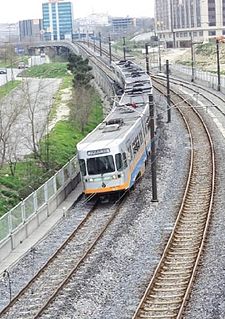 Yenikapı is a port and a quarter in Istanbul, Turkey, in the metropolitan district of Fatih on the European side of the Bosphorus, and along the southern shore of the city's historically central peninsula. 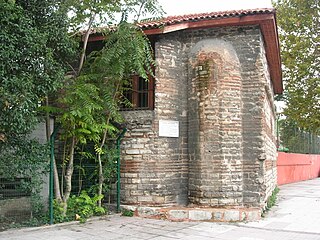 Manastır Mosque is a former Eastern Orthodox church converted into a mosque by the Ottomans. Neither archeological excavations nor medieval sources have made it possible to find a satisfactory answer as to its original dedication as a church. It is however possible that the small building was part of the Byzantine monastery dedicated to the Holy Martyrs Menodora, Metrodora, and Nymphodora, or an annex of the nunnery of Kyra Martha. The edifice is a minor example of Byzantine architecture in Constantinople, and is important for historical reasons. 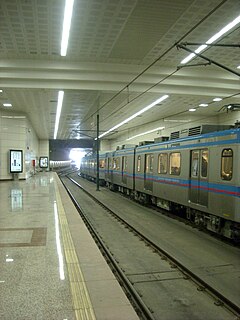 T4 Topkapı - Mescid-i Selam tram line is a light rail line in Istanbul, Turkey, operated by Istanbul Ulaşım AŞ. It runs from Topkapı north to Mescid-i Selam, a total of 15.3 km (9.5 mi). The T4 line operates its own right-of-way in a street median for most of its route, though with a few at-grade crossings, thus technically making it light rail though the operator Metro Istanbul categorizes it as a tramline.

The Panorama 1453 Historical Museum is a historical museum in Istanbul that opened on 31 January 2009.

Bayrampaşa—Maltepe is a rapid transit station on the M1 line of the Istanbul Metro. It is located in southern Eyüp, adjacent to the O-3 highway. An out-of-system connection Demirkapı station on the T4 light rail line is available as well as İETT buses.

The following outline is provided as an overview of and topical guide to Istanbul: 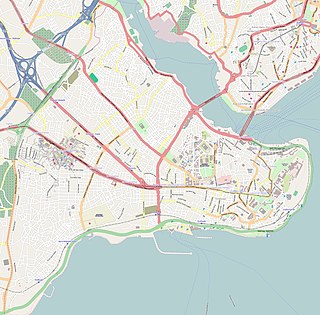 Topkapı is a neighbourhood in Istanbul, Turkey. Topkapı is a part of the district of Fatih.