The Topkhana Forest (Azerbaijani : Topxana meşəsi) is a forest [1] and a state reserve located near Shusha, Azerbaijan. [2] [3] Claims of its destruction in 1988 caused tensions over the political future of Nagorno-Karabakh and encouraged civil and inter-ethnic unrest that would eventually erupt into the first Nagorno-Karabakh War.

Topkhana is the name of a gently-sloping hillside opposite (and visible from) the town of Shusha, but separated from the town by deep gorge containing the Karkar (also known as the Dashalty) river. Its name derives from it being the location of cannons ("top" in Turkic languages) of Mohammad Khan Qajar during his siege of Shusha in 1795. [4] The forest was mentioned in Anar Rzayev's novel The Last Night of the Expiring Year first published in 1970. [5] Yevgeni Kotlyarov, USSR Master of Sports and specialist on athletic tourism, mentioned "forested slopes of the Topkhana plateau in Shusha" in his 1978 publication on mountain tourism in Karabakh. [6] In his book of critical reviews of Soviet literature, published in 1985, writer Elchin Afandiyev, who spent his younger years in Shusha, mentioned "staring into the dark blue depth of the mighty Topkhana forest" as a youth and "dreaming of having [his] first novel published". [7] In early November 1988, the site was described by Galina Starovoitova as home to "just one rather spindly tree and some scrubby bushes". [8]

In October 1988 Abdurrahman Vazirov, the First Secretary of the Communist Party of Azerbaijan, announced in a speech that a bridge should be constructed across the Hunot Gorge in order to expand the town of Shusha onto the opposite bank and link it to the surrounding countryside. Shusha was predominantly Azerbaijani-populated, but the opposite bank was inhabited exclusively by Armenians, who considered this was an attempt to expand Azerbaijani-inhabited territory in Nagorno-Karabakh at the expense of its Armenian population. The Karabakh Committee decided a symbolic Armenian-held structure should be erected on that opposite bank, and on 5 November consulted with the Central Committee of the Communist Party of Armenia, who, in return for an assurance that the upcoming October Revolution parade in Yerevan would not be disrupted, agreed to send trucks loaded with building materials for the construction. The trucks and materials arrived in Shusha on 7 November. This (in the Gregorian calendar) was the anniversary of the October 1917 revolution - but Shusha had been placed under curfew and the usual Communist parades and ceremonies had been cancelled. [9]

On 9 November 1988 construction work began at Topkhana on a vacation resort for workers at Yerevan's Kanaker aluminium factory. Permission for the work had been granted by the civic authorities of nearby Askeran, who had designated 15 acres of land for the project.[ citation needed ]

The halting of the construction was accompanied by an "atmosphere of hysteria" erupting in Baku, fed by inaccurate information printed in local Baku newspapers, none of which had actually sent a reporter to Shusha. Nationalists had taken control of the Azerbaijani press, publishing stories that a "sacred grove" had been destroyed by Armenians who were going to build an aluminium plant. The aim was to stir up popular pro-Azerbaijani and anti-Armenian sentiments. An editorial in Bakinskiy Rabochiy (Baku Worker) called the construction a "branch of the Kanakerskiy Aluminum Plant", the location the "Topkhan Natural History Museum of living nature", and asserted that for Azerbaijanis, Topkhana was "the final drop that made the cup of patience overflow". [10] [11] Azerbaijan radio claimed that Topkhane was a "historical natural monument" and the site of an Azerbaijani fortress. The result was an organized Azerbaijani popular movement emerging for the first time in the growing Nagorno-Karabagh crisis [12] and, starting on 17 November, large-scale demonstrations began in Baku's Lenin Square to protest against the supposed destruction at Topkhana. The 17 November event is now commemorated as a national holiday in Azerbaijan, known as "National Revival Day". [13]

Azerbaijani sources still maintain that the Baku reports of November 1988 about Topkhana are true, describing the forest as "a true miracle of nature", claiming "here lived plants, bears, wolves, wild boars, foxes, hares, deer, quail, pigeons, a variety of other animals and birds. Along the forest stretched sub-alpine and alpine meadows, deep gorges and springs dazzled the imagination. It is estimated that more than 2,000 oak trees and other rare species of trees have been felled at Topkhana and transported to Armenia. Its rich flora and fauna continue to be destroyed." [14] 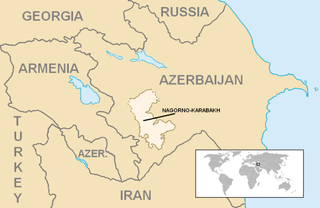 Nagorno-Karabakh is a landlocked region in the South Caucasus, within the mountainous range of Karabakh, lying between Lower Karabakh and Zangezur, and covering the southeastern range of the Lesser Caucasus mountains. The region is mostly mountainous and forested.

Stepanakert, or Khankendi, is the de facto capital and the largest city of the self-proclaimed Republic of Artsakh, though the city is internationally recognized as part of Azerbaijan. As of 2015, the population of Stepanakert is 55,200.

Shusha is a city and the centre of the Shusha District of Azerbaijan. Situated at an altitude of 1,400–1,800 metres (4,600–5,900 ft) in the Karabakh mountains, Shusha was a mountain recreation resort in the Soviet era. 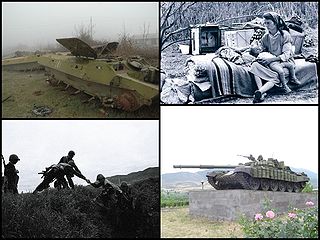 The First Nagorno-Karabakh War was an ethnic and territorial conflict that took place from the late 1980s to May 1994, in the enclave of Nagorno-Karabakh in southwestern Azerbaijan, between the majority ethnic Armenians of Nagorno-Karabakh backed by Armenia, and the Republic of Azerbaijan. As the war progressed, Armenia and Azerbaijan, both former Soviet Republics, entangled themselves in protracted, undeclared mountain warfare in the mountainous heights of Karabakh as Azerbaijan attempted to curb the secessionist movement in Nagorno-Karabakh. The enclave's parliament had voted in favor of uniting itself with Armenia and a referendum, boycotted by the Azerbaijani population of Nagorno-Karabakh, was held, whereby most of the voters voted in favor of independence. The demand to unify with Armenia began in a relatively peaceful manner in 1988; in the following months, as the Soviet Union disintegrated, it gradually grew into an increasingly violent conflict between Armenians and Azerbaijanis, resulting in ethnic cleansing, with the Sumgait (1988) and Baku (1990) pogroms directed against Armenians, and the Gugark pogrom (1988) and Khojaly Massacre (1992) directed against Azerbaijanis being notable examples. Inter-ethnic clashes between the two broke out shortly after the parliament of the Nagorno-Karabakh Autonomous Oblast (NKAO) in Azerbaijan voted to unify the region with Armenia on 20 February 1988. The declaration of secession from Azerbaijan was the final result of a territorial conflict regarding the land. As Azerbaijan declared its independence from the Soviet Union and removed the powers held by the enclave's government, the Armenian majority voted to secede from Azerbaijan and in the process proclaimed the unrecognized Republic of Nagorno-Karabakh. 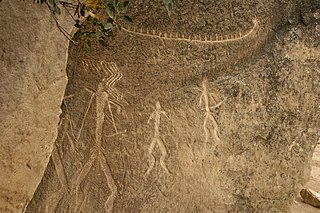 The Armenian–Azerbaijani War, which started after the Russian Revolution, was a series of conflicts in 1918, then from 1920 to 1922, that occurred during the brief independence of Armenia and Azerbaijan, and afterwards. Most of the conflicts did not have a principal pattern with a standard armed structure. The Ottoman Empire and British Empire were involved in different capacities: the Ottoman Empire left the region after the Armistice of Mudros but British influence continued until Dunsterforce was pulled back in the 1920s. The conflicts involved civilians in the disputed districts of Kazakh-Shamshadin, Zanghezur, Nakhchivan and Karabakh. The use of guerrilla and semi-guerrilla operations was the main reason for the high civilian casualties, which occurred during the nation-building activities of the newly established states. 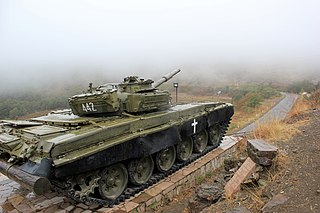 The Battle of Shusha was the first significant military victory by Armenian forces during the First Nagorno-Karabakh War. The battle took place in the strategically important mountain town of Shusha on the evening of May 8, 1992, and fighting swiftly concluded the next day after Armenian forces captured it and drove out the defending Azerbaijanis. Armenian military commanders based in Nagorno-Karabakh's capital of Stepanakert had been contemplating the capture of the town after Azerbaijani shelling of Stepanakert.

The Askeran clash on 22—23 February 1988 in the town of Askeran was one of the starting points of Armenian-Azerbaijani conflict, which triggered the First Nagorno-Karabakh War. The Askeran clash was followed by the Sumgait pogroms.

Dashalty or Karintak is a village in the Shusha District of Azerbaijan. The village had an ethnic Armenian-majority population prior to the 2020 Nagorno-Karabakh war, and also had an Armenian majority in 1989.

Culture of Artsakh includes artifacts of tangible and intangible culture that has been historically associated with Artsakh in the Southern Caucasus, controlled by Azerbaijan and the self-proclaimed Republic of Artsakh. These include monuments of religious and civil architecture, memorial and defense structures, and various forms of art.

The Tehran Communiqué, also known as the Joint statement of the heads of state in Tehran is the joint communiqué mediated by Iranian President, Akbar Hashemi Rafsanjani and signed by the acting President of Azerbaijan, Yagub Mammadov and President of Armenia, Levon Ter-Petrossian on May 7, 1992 with an intention to end the four-year-long hostilities between Armenia and Azerbaijan over the Nagorno-Karabakh region, a former autonomous oblast of the Azerbaijan SSR.

Siege of Stepanakert started in late 1991, during the First Nagorno-Karabakh War, in Stepanakert, the largest city in Nagorno-Karabakh, when the Azerbaijani forces besieged the city. Until May 1992, the city and its Armenian population was a target of a months-long campaign of intentional bombardment by Azerbaijan. The bombardment of Stepanakert and adjacent Armenian towns and villages, which took place under the conditions of total blockade by Azerbaijan, caused widespread destruction and many civilian deaths. 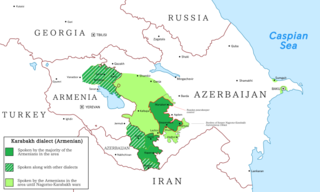 The Karabakh dialect is an ancient Eastern Armenian dialect with a unique phonetic and syntactic structure mainly spoken in the de facto independent Nagorno-Karabakh Republic and partially in the southern and northeastern parts of the Republic of Armenia, i.e. in the provinces of Artsakh, Utik, Syunik and Gugark of historical Armenia. 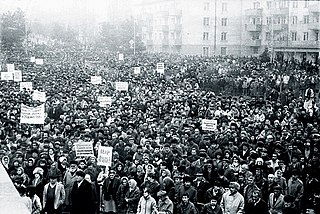 The Karabakh movement was a national mass movement in Armenia and Nagorno-Karabakh from 1988 to 1992 that advocated for the transfer of the mainly Armenian-populated Nagorno-Karabakh Autonomous Oblast of neighboring Azerbaijan to the jurisdiction of Armenia. 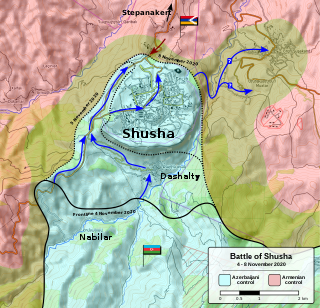 The Battle of Shusha was a battle fought between the armed forces of Azerbaijan and the self-proclaimed Republic of Artsakh, militarily supported by Armenia, over the control of the city of Shusha, during the 2020 Nagorno-Karabakh war. The battle is considered one of the bloodiest battles of the war.