In mathematical economics, Topkis's theorem is a result that is useful for establishing comparative statics. The theorem allows researchers to understand how the optimal value for a choice variable changes when a feature of the environment changes. The result states that if f is supermodular in (x,θ), and D is a lattice, then

is nondecreasing in θ. The result is especially helpful for establishing comparative static results when the objective function is not differentiable.

A driver is driving down a highway and must choose a speed, s. Going faster is desirable, but is more likely to result in a crash. There is some prevalence of potholes, p. The presence of potholes increases the probability of crashing. Note that s is a choice variable and p is a parameter of the environment that is fixed from the perspective of the driver. The driver seeks to

We would like to understand how the driver's speed (a choice variable) changes with the amount of potholes:

If one wanted to solve the problem with standard tools such as the implicit function theorem, one would have to assume that the problem is well behaved: U(.) is twice continuously differentiable, concave in s, that the domain over which s is defined is convex, and that it there is a unique maximizer

for every value of p and that

is in the interior of the set over which s is defined. Note that the optimal speed is a function of the amount of potholes. Taking the first order condition, we know that at the optimum,

. Differentiating the first order condition, with respect to p and using the implicit function theorem, we find that

If s and p are substitutes,

and more potholes causes less speeding. Clearly it is more reasonable to assume that they are substitutes.

The problem with the above approach is that it relies on the differentiability of the objective function and on concavity. We could get at the same answer using Topkis's theorem in the following way. We want to show that

is submodular (the opposite of supermodular) in

. Note that the choice set is clearly a lattice. The cross partial of U being negative,

, is a sufficient condition. Hence if

Hence using the implicit function theorem and Topkis's theorem gives the same result, but the latter does so with fewer assumptions. 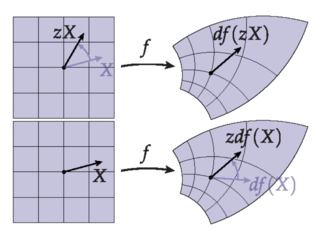 In condensed matter physics, Bloch's theorem states that solutions to the Schrödinger equation in a periodic potential take the form of a plane wave modulated by a periodic function. These solutions, sometimes known as Bloch functions or Bloch states, are eigenstates in energy, and serve as a suitable basis for the wave functions of electrons in crystalline solids. Mathematically, they are written:

Mechanism design is a field in economics and game theory that takes an objectives-first approach to designing economic mechanisms or incentives, toward desired objectives, in strategic settings, where players act rationally. Because it starts at the end of the game, then goes backwards, it is also called reverse game theory. It has broad applications, from economics and politics in such fields as market design, auction theory and social choice theory to networked-systems.

In economics, comparative statics is the comparison of two different economic outcomes, before and after a change in some underlying exogenous parameter.

In mathematics, a function 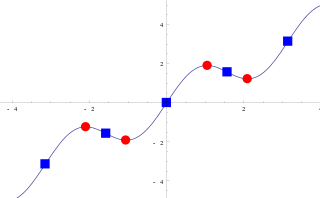 In mathematics, a change of variables is a basic technique used to simplify problems in which the original variables are replaced with functions of other variables. The intent is that when expressed in new variables, the problem may become simpler, or equivalent to a better understood problem.

The Ramsey–Cass–Koopmans model, or Ramsey growth model, is a neoclassical model of economic growth based primarily on the work of Frank P. Ramsey, with significant extensions by David Cass and Tjalling Koopmans. The Ramsey–Cass–Koopmans model differs from the Solow–Swan model in that the choice of consumption is explicitly microfounded at a point in time and so endogenizes the savings rate. As a result, unlike in the Solow–Swan model, the saving rate may not be constant along the transition to the long run steady state. Another implication of the model is that the outcome is Pareto optimal or Pareto efficient.