Toplumcu Kurtuluş Partisi may refer to:

The Communal Liberation Party was a left-wing political party in Northern Cyprus.

The Socialist Liberation Party is a Marxist–Leninist communist party in Turkey.

Sonay Adem was a Turkish Cypriot politician. He served as the Minister for Labor and Social Security in the Cabinet of Northern Cyprus under Prime Minister Ferdi Sabit Soyer. He was confirmed in his office in April 2005 and served until 2009. He was a member of the Republican Turkish Party until his resignation, after which he joined the Communal Liberation Party-New Forces in January 2017. He has done extensive work on curbing illegal immigration to the island, as well as immigration reform, in conjunction with organisations such as the Union of Construction Sector Contractors.

The Revolutionary Communist Party of Turkey is a clandestine communist party in Turkey. TDKP considers itself to be the continuation of the People's Liberation Army of Turkey. The THKO Conference gathered in October 1978. It changed the name of the organisation to that of Revolutionary Communist Party of Turkey - Construction Organisation. The split with the pro-Soviet line of the THKO, called Mücadelede Birlik in 1974 is also shown as its roots. Between 1976 and 1979 the followers of THKO gathered around a legal publication called Halkın Kurtuluşu and are often known by that name. THKO passed through two splits, Bes Parçacılar left in 1976 and THKO-Aktancılar in 1977. Bes Parçacılar reunited with TDKP-IÖ in 1979. The TDKP-IÖ formally founded TDKP at a congress on 2 February 1980.

Revolutionary People's Party is a political party in Turkey, politically close to the PKK. DHP was formed in 1994. It publishes Alternatif.

Workers Vanguard Party of Kurdistan was a Kurdish underground political party in Turkey.

The Communal Democracy Party is a social-democratic political party in the Turkish Republic of Northern Cyprus. The party came into being in May 2007 as a merger of the Peace and Democracy Movement with the Communal Liberation Party. At the 2009 legislative elections for the Assembly of the Republic in the Turkish Republic of Northern Cyprus, the TDP, in its first elections, won 2 out of 50 seats and 6.87% of the popular vote. In 2013, it took part in the interim Siber cabinet with three ministers. At the 2013 legislative elections, the party increased its share of the vote to 7.41% and its number of MPs to 3. The TDP currently holds the mayorship of the Nicosia Turkish Municipality with Mehmet Harmancı.

HKP may refer to:

Maoist Communist Party of Turkey is a Maoist insurgent organization in Turkey. It is the most significant of the Maoist organisations in Turkey; it upholds the legacy of Ibrahim Kaypakkaya. It maintains two armed wings: the People's Partisan Forces and People's Libration Army . MKP is a part of Revolutionary Internationalist Movement and participates in the Conference of Communist and Workers’ Parties of the Balkans.

The Communist Party of Turkey is a communist party in Turkey.

The Revolutionary Socialist Workers' Party is a Trotskyist party in Turkey. It was founded by Şevket Doğan Tarkan and his friends from Trotskyist journal Socialist Worker in 1997. The group had links to far-left Kurtuluş Hareketi before the 1980 Turkish coup d'état.

The People's Liberation Party is a left-wing populist and anti-imperialist political party in Turkey, which advocates revolutionary socialism. The HKP is based strongly around Hikmet Kıvılcımlı's ideas and philosophy. 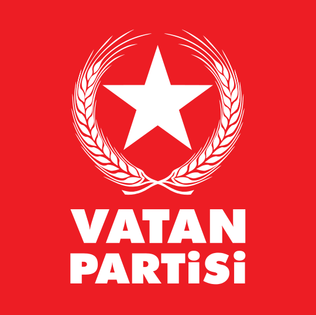 The Patriotic Party is a left-wing nationalist political party in Turkey.

The United Freedom Forces is a joint expatriate militia of several revolutionary socialist organizations from Turkey, most notably the Revolutionary Communard Party (DKP), active in the Rojava conflict of the Syrian Civil War.

Communal Liberation Party-New Forces is a centre-left political party in Northern Cyprus. It is led by Mehmet Çakıcı. It was founded in 2016 after a group headed by Çakıcı broke off from the Communal Democracy Party (TDP).