The prison is an establishment of the Federal Government of Mexico and is administered by the Secretariat of Public Security (Spanish : Secretaría de Seguridad Pública, SSP). The director of the prison is Gregoria Salazar Robles, appointed 12 March 2012. [2]

As of September 2015 the prison was overcrowded with a capacity for 3,685 inmates but a population of 4,091. [1] The infrastructure in poor condition with generally no water, light or ventilation in the cells according to a 2014 report by United Nations Special Rapporteur Juan E. Méndez. [3]

In 2011 police found the dismembered body of prison security chief Francisco Martinez Ramirez in a plastic box inside a car abandoned near Topo Chico. [4]

On 11 February 2016, 49 inmates were killed and 12 injured following a fight between two rival gangs at Topo Chico [6] in which inmates set fires affecting two of the prison's units. [7] Governor of Nuevo León state Jaime Rodríguez Calderón told journalists that one of the factions involved in the violence was led by a leader of the Zetas Cartel, and the leader of the other group was identified by Mexican media as a leader of the Gulf Cartel. [8]

Los Zetas is a Mexican criminal syndicate, regarded as one of the most dangerous of the country's drug cartels. While primarily concerned with drug trafficking, the organization also runs profitable sex trafficking and gun running rackets. The origins of Los Zetas date back to the late 1990s, when commandos of the Mexican Army deserted their ranks and began working as the enforcement arm of the Gulf Cartel. In February 2010, Los Zetas broke away and formed their own criminal organization, rivalling the Gulf Cartel.

A prison riot is an act of concerted defiance or disorder by a group of prisoners against the prison administrators, prison officers, or other groups of prisoners.

The Gulf Cartel is a criminal syndicate and drug trafficking organization in Mexico, and perhaps one of the oldest organized crime groups in the country. It is currently based in Matamoros, Tamaulipas, directly across the U.S. border from Brownsville, Texas.

Penitenciaría is a station on Line 1 of the Monterrey Metro. It is located in Rodrigo Gomez Avenue in Monterrey near the state criminal courthouses and Topo Chico prison. The station was opened on 25 April 1991 as part of the inaugural section of Line 1, between San Bernabé and Exposición. 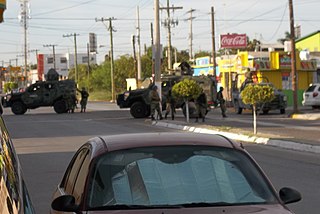 Joint Operation Nuevo León-Tamaulipas is an anti-drug joint operation in two Mexican states of Tamaulipas and Nuevo León by Federal Police and the Mexican Armed Forces. The objective of the joint operation is to eliminate Los Zetas and Gulf Cartel operations in the area. So far, many cartel members have been either killed or arrested. Recently Los Zetas and the Gulf Cartel have broken relations and started fighting each other.

Servando Gómez Martínez, commonly referred to by his alias La Tuta for once being a teacher, is a Mexican drug lord and former leader of the Knights Templar Cartel, a criminal organization based in the state of Michoacán. He is a former leader and founder member of La Familia Michoacana drug cartel, the split-off group of the Knights Templar. On February 27, 2015, he was arrested by Mexican security forces in Morelia, Michoacán.

Arnoldo Rueda Medina is a former Mexican drug lord and high-ranking leader of La Familia Michoacana, a drug trafficking organization which is based in Michoacán, Mexico.

The Barrio Azteca, or Los Aztecas, is a Mexican-American gang originally based in El Paso, Texas. The gang was formed in the jails of El Paso in 1986 and expanded into a transnational criminal organization. Currently one of the most violent gangs in the United States, they are said to have over 3,000 members across the country in locations such as New Mexico, Texas, Massachusetts, and Pennsylvania as well as at least 5,000 members in Ciudad Juarez, Mexico. 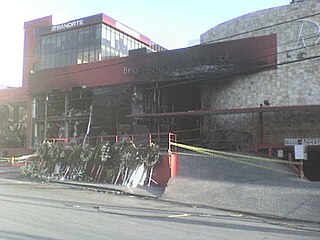 The Apodaca prison riot occurred on 19 February 2012 at a prison in Apodaca, Nuevo León, Mexico. Mexico City officials stated that at least 44 people were killed, with another twelve injured. The Blog del Narco, a blog that documents events and people of the Mexican Drug War anonymously, reported that the actual (unofficial) death toll may be more than 70 people. The fight was between Los Zetas and the Gulf Cartel, two drug cartels that operate in northeastern Mexico. The governor of Nuevo León, Rodrigo Medina, mentioned on 20 February 2012 that 30 inmates escaped from the prison during the riot. Four days later, however, the new figures of the fugitives went down to 29. On 16 March 2012, the Attorney General's Office of Nuevo León confirmed that 37 prisoners had actually escaped on the day of the massacre. One of the fugitives, Óscar Manuel Bernal alias La Araña, is considered by the Mexican authorities to be "extremely dangerous," and is believed to be the leader of Los Zetas in the municipality of Monterrey. Some other fugitives were also leaders in the organization.

The Altamira prison brawl was a deadly fight that occurred on 4 January 2012 in Altamira, Tamaulipas, Mexico. Officials from the state of Tamaulipas confirmed that 31 people were killed, with another thirteen injured. The fight started after a drug gang burst into a section of the prison where they were banned from, attacking their rival gang housed there, triggering the fight. During the altercation, the inmates used several kinds of cold weapons to kill their opponents. The prisoners also used sticks and knives to massacre the members of the rival gang.

On 10 February 2016, a prison riot broke out at the Topo Chico prison near Monterrey, in northern Mexico. 49 inmates were killed during the riot and ensuing fire. The riot was the most deadly in Mexican penal history, surpassing the death toll of the 2012 Apodaca prison riot. After the rioting, authorities uncovered 'luxury cells' prison leaders had. Among the items confiscated included televisions, mini-fridges, aquariums, and saunas. 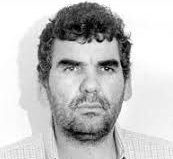 Gilberto García Mena, also known as El June, is a Mexican convicted drug lord and former high-ranking member of the Gulf Cartel, a criminal group based in Tamaulipas, Mexico. He began his criminal career as a small-time marijuana smuggler in his teens, and later joined the Gulf Cartel under kingpin Juan García Ábrego. García Mena was arrested by U.S. authorities in Texas while possessing marijuana in 1984, but was released without a conviction. He returned to Mexico, and established a center of operations in Nuevo León. García Mena was arrested on drug-trafficking charges in 1989, but authorities were again unable to convict him. Released in 1990, he rejoined the Gulf Cartel.