-γ is the topological entanglement entropy.

The topological entanglement entropy is equal to the logarithm of the total quantum dimension of the quasiparticle excitations of the state. 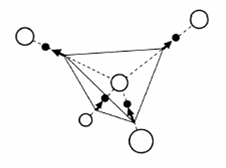 A spin ice is a magnetic substance that does not have a single minimal-energy state. It has magnetic moments (i.e. "spin") as elementary degrees of freedom which are subject to frustrated interactions. By their nature, these interactions prevent the moments from exhibiting a periodic pattern in their orientation down to a temperature much below the energy scale set by the said interactions. Spin ices show low-temperature properties, residual entropy in particular, closely related to those of common crystalline water ice. The most prominent compounds with such properties are dysprosium titanate (Dy2Ti2O7) and holmium titanate (Ho2Ti2O7). The orientation of the magnetic moments in spin ice resembles the positional organization of hydrogen atoms (more accurately, ionized hydrogen, or protons) in conventional water ice (see figure 1).

A topological quantum computer is a theoretical quantum computer that employs two-dimensional quasiparticles called anyons, whose world lines pass around one another to form braids in a three-dimensional spacetime. These braids form the logic gates that make up the computer. The advantage of a quantum computer based on quantum braids over using trapped quantum particles is that the former is much more stable. Small, cumulative perturbations can cause quantum states to decohere and introduce errors in the computation, but such small perturbations do not change the braids' topological properties. This is like the effort required to cut a string and reattach the ends to form a different braid, as opposed to a ball bumping into a wall. Alexei Kitaev proposed topological quantum computation in 1997. While the elements of a topological quantum computer originate in a purely mathematical realm, experiments in fractional quantum Hall systems indicate these elements may be created in the real world using semiconductors made of gallium arsenide at a temperature of near absolute zero and subjected to strong magnetic fields.

Oleg Sushkov is a professor at the University of New South Wales and a leader in the field of high temperature super-conductors. Educated in Russia in quantum mechanics and nuclear physics, he now teaches in Australia.

Jozef T. Devreese is a Belgian scientist, with a long career in condensed matter physics. He is Professor Emeritus of Theoretical Physics at the Universiteit Antwerpen. 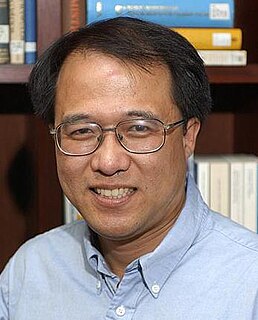 Yambo is a computer software package for studying many-body theory aspects of solids and molecule systems. It calculates the excited state properties of physical systems from first principles, e.g., from quantum mechanics law without the use of empirical data. It is an open-source software released under the GNU General Public License (GPL). However the main development repository is provate and only a subset of the features available in the private repository are cloned into the public repository and thus distributed.

The SP formula for the dephasing rate of a particle that moves in a fluctuating environment unifies various results that have been obtained, notably in condensed matter physics, with regard to the motion of electrons in a metal. The general case requires to take into account not only the temporal correlations but also the spatial correlations of the environmental fluctuations. These can be characterized by the spectral form factor , while the motion of the particle is characterized by its power spectrum . Consequently, at finite temperature the expression for the dephasing rate takes the following form that involves S and P functions:

Tilman Esslinger is a German experimental physicist. He is Professor at ETH Zurich, Switzerland, and works in the field of ultracold quantum gases and optical lattices.

Scissors Modes are collective excitations in which two particle systems move with respect to each other conserving their shape. For the first time they were predicted to occur in deformed atomic nuclei by N. LoIudice and F. Palumbo, who used a semiclassical Two Rotor Model, whose solution required a realization of the O(4) algebra that was not known in mathematics. In this model protons and neutrons were assumed to form two interacting rotors to be identified with the blades of scissors. Their relative motion (Fig.1) generates a magnetic dipole moment whose coupling with the electromagnetic field provides the signature of the mode.

Quantum illumination is a paradigm for target detection that employs quantum entanglement between a signal electromagnetic mode and an idler electromagnetic mode, as well as joint measurement of these modes. The signal mode is propagated toward a region of space, and it is either lost or reflected, depending on whether a target is absent or present, respectively. In principle, quantum illumination can be beneficial even if the original entanglement is completely destroyed by a lossy and noisy environment.

James (Jim) P. Eisenstein is the Frank J. Roshek Professor of Physics and Applied Physics at the physics department of California Institute of Technology.

Many body localization (MBL) is a dynamical phenomenon occurring in isolated many-body quantum systems. It is characterized by the system failing to reach thermal equilibrium, and retaining a memory of its initial condition in local observables for infinite times.

Many-body localization (MBL) is a dynamical phenomenon which leads to the breakdown of equilibrium statistical mechanics in isolated many-body systems. Such systems never reach local thermal equilibrium, and retain local memory of their initial conditions for infinite times. One can still define a notion of phase structure in these out-of-equilibrium systems. Strikingly, MBL can even enable new kinds of exotic orders that are disallowed in thermal equilibrium --- a phenomenon that goes by the name of localization protected quantum order (LPQO) or eigenstate order