Topolovac is a village near Sisak, Croatia.

Naka is a district of Ibaraki Prefecture, Japan.

The Stadio Silvio Piola is a multi-use stadium in Novara, Italy. It is currently used mostly for football matches and is the home ground of Novara Calcio. The stadium holds 17,875 and was named after Italy legend and former player Silvio Piola.

Ravni Topolovac is a village in Serbia. It is situated in the Žitište municipality, Central Banat District, Vojvodina province. The village has a Serb ethnic majority (88.09%) and its population numbering 1,352 people.

Zrinski Topolovac is a village and municipality in Bjelovar-Bilogora County, Croatia. There are 890 inhabitants, of whom 99.89% are Croats. 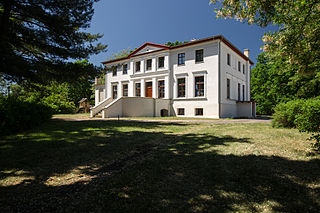 Kietlów is a village in the administrative district of Gmina Jemielno, within Góra County, Lower Silesian Voivodeship, in south-western Poland. Prior to 1945, it was part of Germany.

Boraszyce Małe is a village in the administrative district of Gmina Wińsko, within Wołów County, Lower Silesian Voivodeship, in south-western Poland. Prior to 1945 it was in Germany.

Stare Króle is a village in the administrative district of Gmina Księżpol, within Biłgoraj County, Lublin Voivodeship, in eastern Poland. It lies approximately 3 kilometres (2 mi) north-east of Księżpol, 13 km (8 mi) south of Biłgoraj, and 92 km (57 mi) south of the regional capital Lublin.

Cilən is a village in the Khojavend Rayon of Azerbaijan.

Köyük is a village in the Yevlakh Rayon of Azerbaijan. The village forms part of the municipality of Qaramanlı.

Stepna Stara is a village in the administrative district of Gmina Olszewo-Borki, within Ostrołęka County, Masovian Voivodeship, in east-central Poland.

Róża Wielka-Kolonia is a settlement in the administrative district of Gmina Szydłowo, within Piła County, Greater Poland Voivodeship, in west-central Poland. It lies approximately 13 kilometres (8 mi) west of Szydłowo, 20 km (12 mi) west of Piła, and 90 km (56 mi) north of the regional capital Poznań.

Ocoyoacac is a town and municipality in the State of Mexico in Mexico. The municipality covers an area of 134.71 km². It is one of the 17 municipalities that border Mexico City. It borders the Distrito Federal's western borough of Cuajimalpa.

Tondikiwindi is a village and rural commune in Niger.

The Embassy of Russia in Havana is the headquarters of the diplomatic mission of the Russian Federation in the Republic of Cuba. It's well known for its striking constructivist building in the Miramar district of the city built by architect Aleksandr Rochegov. Some liken it to a sword, others to a syringe.

Kilgi is a village in Märjamaa Parish, Rapla County in western Estonia.

The Church of the Ascension of Jesus is a Macedonian Orthodox Church in Skopje, North Macedonia. It is situated east of Kale Fortress.

Seljani is a village in the municipality of Nevesinje, Republika Srpska, Bosnia and Herzegovina.

Museum of the Republic of North Macedonia is a national institution in North Macedonia and one of the oldest museums in the country. It is located in the Old Bazaar in Skopje, near the Skopje Fortress. The Museum of the Republic of North Macedonia was created by joining three museum in one. The three museum that were unified were the archaeological, historical and ethnological museum, of which the archaeological museum was the oldest one; it was opened in 1924 and that date is considered as an establishing date of the national museum. During the existence of the Socialist Republic of Macedonia, the museum was known as People's Museum of Macedonia.

Half Rock is an unincorporated community in Mercer County, in the U.S. state of Missouri.