Previous papers that are now part of the Pender Topsail Post & Voice:

The Pender-Topsail Post & Voice is a member of the North Carolina Press Association: [8] 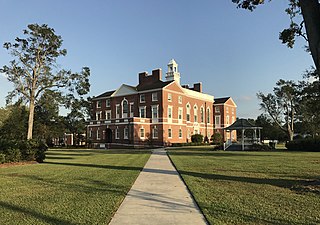 Pender County is a county located in the U.S. state of North Carolina. As of the 2010 census, the population was 52,217. Its county seat is Burgaw. 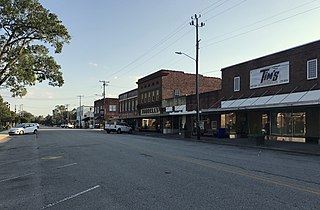 Burgaw is a town and the county seat of Pender County, North Carolina, United States. The population was 3,872 at the 2010 census.

Cape Fear is a coastal plain and Tidewater region of North Carolina centered about the city of Wilmington. The region takes its name from the adjacent Cape Fear headland, as does the Cape Fear River which flows through the region and empties into the Atlantic Ocean near the cape. Much of the region's populated areas are found along the Atlantic beaches and the Atlantic Intracoastal Waterway, while the rural areas are dominated by farms and swampland like that of the Green Swamp. The general area can be also identified by the titles "Lower Cape Fear", "Wilmington Metropolitan Area", "Southeastern North Carolina", and "Azalea Coast". The latter name is derived from the North Carolina Azalea Festival held annually in Wilmington. Municipalities in the area belong to the Cape Fear Council of Governments.

Hickory Daily Record is an American, English language daily newspaper based in Hickory, North Carolina. It is owned by Lee Enterprises and is published seven days a week. The newspaper is a member of the North Carolina Press Association.

The Daily Dispatch is an American, English language community-oriented daily newspaper based in Henderson, North Carolina, primarily covering the North Carolina counties of Vance, Granville, and Warren. It is published daily except Mondays and Christmas Day.

The McDowell News is an English language newspaper published daily in Marion, North Carolina, United States, covering McDowell County. The newspaper is currently owned by Lee Enterprises, it was previously owned by Berkshire Hathaway's subsidiary BH Media Group since 2012, and by Media General before that. Lee Enterprises bought BH Media Group's publications in early 2020. The McDowell News is a member of the North Carolina Press Association. The McDowell News has a Facebook page for sharing news and interacting with readers.

The Gaston Gazette is an American, English Language daily newspaper based in Gastonia, North Carolina. The newspaper was owned by Freedom Communications until 2012, when Freedom sold its Florida and North Carolina papers to Halifax Media Group. In 2015, Halifax was acquired by New Media Investment Group, which was merged and became Gannett in 2019.

The Daily News is an American, English language daily newspaper headquartered in Jacksonville, North Carolina. It has served the city of Jacksonville, Marine Corps Base Camp Lejeune, and the surrounding parts of Onslow County including, Richlands, Swansboro, Sneads Ferry, Holly Ridge, and North Topsail since 1953.

Mary Lee Mills was an American nurse. Born into a family of eleven children, she attended the Lincoln Hospital School of Nursing and graduated in a nursing degree and became a registered nurse. After working as a midwife, she joined the United States Public Health Service (USPHS) in 1946 and served as their chief nursing officer of Liberia, working to hold some of their first campaigns in public health education. Mills later worked in Lebanon and established the country's first nursing school, and helped to combat treatable diseases. She was later assigned to South Vietnam, Cambodia and Chad to provide medical education.