Tor Øyvind Hovda (born 24 September 1989 in Ringerike) is a Norwegian footballer who plays for Hønefoss as a midfielder. [1] [2]

Hovda played youth football for both Heradsbygda IL and later Hønefoss BK, where he made his first senior appearance in 2007. Allsvenskan club Kalmar FF signed Hovda for the 2014 season, and he scored the first goal on 27 October against Mjällby AIF. He plays most of the games in the central midfield. 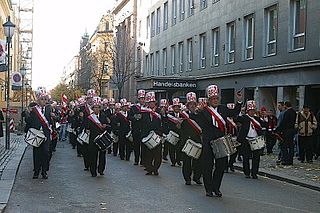 Øyvind Hoås is a Norwegian football striker who currently plays for Kristiansund.

Alexander Groven is a Norwegian football defender who currently plays for Hønefoss BK.

The 2013 Hønefoss BK season was Hønefoss' second consecutive season in the Tippeligaen and their third season in the top flight of Norwegian football. Hønefoss finished bottom of the league, and therefore were relegated to the Adeccoligaen, whilst they reached the Third Round of the Cup losing to Alta of the 2. Divisjon.

Mats André Kaland is a Norwegian footballer who currently plays for Strømmen IF.

Kamer Adem Qaka is an Albanian professional footballer who plays mainly as a defensive midfielder for the Albania national team.

The 2018 season is Sarpsborg 08's 7th season in Eliteserien, following their return to the top level in 2012. It is also their fourth season with Geir Bakke as their manager.