Tor Bergeron[ pronunciation? ] (15 August 1891 – 13 June 1977) was a Swedish meteorologist who proposed a mechanism for the formation of precipitation in clouds. In the 1930s, Bergeron and W. Findeisen developed the concept that clouds contain both supercooled water and ice crystals. According to Bergeron, most precipitation is formed as a consequence of water evaporating from small supercooled droplets and accreting onto ice crystals, which then fall as snow, or melt and fall as cold rain depending on the ambient air temperature. This process is known as the Bergeron Process, and is believed to be the primary process by which precipitation is formed.

Bergeron was one of the principal scientists in the Bergen School of Meteorology, which transformed this science by introducing a new conceptual foundation for understanding and predicting weather. While developing innovative methods of forecasting, the Bergen scientists established the notion of weather fronts and elaborated a new model of extratropical cyclones that accounted for their birth, growth, and decay. Bergeron is credited with discovering the occlusion process, which marks the final stage in the life cycle of an extratropical cyclone.

Cirrus is a genus of atmospheric cloud generally characterized by thin, wispy strands, giving the type its name from the Latin word cirrus, meaning a ringlet or curling lock of hair. Such a cloud can form at any altitude between 5,000 and 13,700 m above sea level. The strands of cloud sometimes appear in tufts of a distinctive form referred to by the common name of "mares' tails". 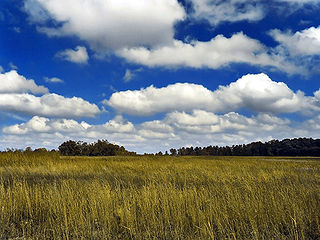 Cirrocumulus is one of the three main genus-types of high-altitude tropospheric clouds, the other two being cirrus and cirrostratus. They usually occur at an altitude of 5 kilometres (16,000 ft) to 12 kilometres (39,000 ft). Like lower altitude cumuliform and stratocumuliform clouds, cirrocumulus signifies convection. Unlike other high-altitude-tropospheric clouds like cirrus and cirrostratus, cirrocumulus includes a small amount of liquid water droplets, although these are in a supercooled state. Ice crystals are the predominant component, and typically, the ice crystals cause the supercooled water drops in the cloud to rapidly freeze, transforming the cirrocumulus into cirrostratus. This process can also produce precipitation in the form of a virga consisting of ice or snow. Thus cirrocumulus clouds are usually short-lived. They usually only form as part of a short-lived transitional phase within an area of cirrus clouds and can also form briefly as a result of the breaking up of part of a cumulonimbus anvil.

In meteorology, precipitation is any product of the condensation of atmospheric water vapor that falls under gravity from clouds. The main forms of precipitation include drizzle, rain, sleet, snow, ice pellets, graupel and hail. Precipitation occurs when a portion of the atmosphere becomes saturated with water vapor, so that the water condenses and "precipitates" or falls. Thus, fog and mist are not precipitation but colloids, because the water vapor does not condense sufficiently to precipitate. Two processes, possibly acting together, can lead to air becoming saturated: cooling the air or adding water vapor to the air. Precipitation forms as smaller droplets coalesce via collision with other rain drops or ice crystals within a cloud. Short, intense periods of rain in scattered locations are called "showers." 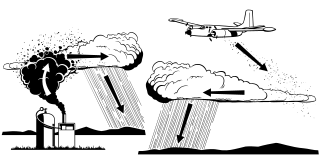 Cloud seeding is a type of weather modification that aims to change the amount or type of precipitation that falls from clouds by dispersing substances into the air that serve as cloud condensation or ice nuclei, which alter the microphysical processes within the cloud. The usual intent is to increase precipitation, but hail and fog suppression are also widely practised in airports where harsh weather conditions are experienced.

The synoptic scale in meteorology is a horizontal length scale of the order of 1000 kilometers or more. This corresponds to a horizontal scale typical of mid-latitude depressions. Most high- and low-pressure areas seen on weather maps are synoptic-scale systems, driven by the location of Rossby waves in their respective hemisphere. Low-pressure areas and their related frontal zones occur on the leading edge of a trough within the Rossby wave pattern, while high-pressure areas form on the back edge of the trough. Most precipitation areas occur near frontal zones. The word synoptic is derived from the Greek word συνοπτικός, meaning seen together. 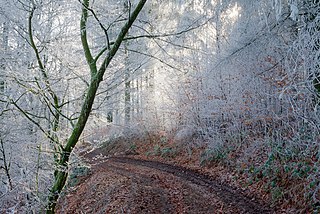 The Wegener–Bergeron–Findeisen process, is a process of ice crystal growth that occurs in mixed phase clouds in regions where the ambient vapor pressure falls between the saturation vapor pressure over water and the lower saturation vapor pressure over ice. This is a subsaturated environment for liquid water but a supersaturated environment for ice resulting in rapid evaporation of liquid water and rapid ice crystal growth through vapor deposition. If the number density of ice is small compared to liquid water, the ice crystals can grow large enough to fall out of the cloud, melting into rain drops if lower level temperatures are warm enough.

Freezing drizzle is drizzle that freezes on contact with the ground or an object at or near the surface. Its METAR code is FZDZ.

Graupel, also called soft hail or snow pellets, is precipitation that forms when supercooled water droplets are collected and freeze on falling snowflakes, forming 2–5 mm (0.08–0.20 in) balls of rime. The term graupel is the German language word for sleet. 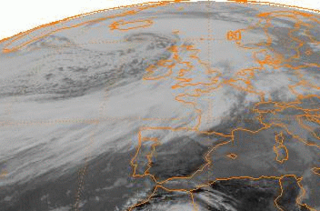 Explosive cyclogenesis is the rapid deepening of an extratropical cyclonic low-pressure area. The change in pressure needed to classify something as explosive cyclogenesis is latitude dependent. For example, at 60° latitude, explosive cyclogenesis occurs if the central pressure decreases by 24 mbar (hPa) or more in 24 hours. This is a predominantly maritime, winter event, but also occurs in continental settings, even in the summer. This process is the extratropical equivalent of the tropical rapid deepening. Although their cyclogenesis is totally different from that of tropical cyclones, bomb cyclones can produce winds of 74–95 mph, the same order as the first categories of the Saffir-Simpson scale and give heavy precipitation. Even though only a minority of the bombs become so strong, some weaker ones have also caused significant damage.

A fallstreak hole is a large gap, usually circular or elliptical, that can appear in cirrocumulus or altocumulus clouds. Such holes are formed when the water temperature in the clouds is below freezing, but the water, in a supercooled state, has not frozen yet due to the lack of ice nucleation. When ice crystals do form, a domino effect is set off due to the Bergeron process, causing the water droplets around the crystals to evaporate: this leaves a large, often circular, hole in the cloud. 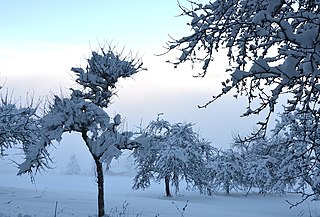