Gromstad transferred from Arendal to Stabæk in 2007, and he attended the secondary school Norges Toppidrettsgymnas while playing for Stabæk. [1] In total he played 43 matches for the club, [3] and Gromstad started six of the eight first matches in the 2012-season in addition to playing both Stabæk's cup matches. [1]

Gromstad was last seen after leaving his brother's apartment at 07:26 AM (UTC+2) on Saturday 12 May 2012, and was reported missing later the same night. He was not carrying his wallet or cellphone at the time of the disappearance. He was discovered dead on the morning of 14 May 2012, after being missing for 36 hours. [4] According to a press release made by his club, Gromstad died from an accidental fall at a nearby construction site. [5] 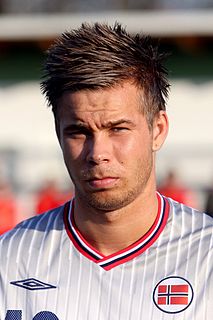 Marcus Pedersen is a Norwegian football player who plays for Ankaraspor.

Vegar Eggen Hedenstad is a Norwegian professional footballer who plays for Turkish club Fatih Karagümrük, as a defender. Hedenstad has been capped at international level for Norway

Anthony Ohikhuaeme Omoijuanfo is a Norwegian footballer who plays as a forward for Eliteserien club Molde.

Morten Thorsby is a Norwegian professional footballer who plays for Serie A side Sampdoria as a midfielder.

Borger Thomas is a Norwegian professional footballer who plays as a goalkeeper for Øygarden.

Giorgi Gorozia is a Russian and Georgian footballer who plays for Russian club Dynamo Bryansk as a midfielder.

Steinar Ryen Strømnes is a Norwegian footballer who plays for HamKam.

The 2019 season was Stabæk's sixth season back in the Eliteserien following their relegation in 2012 and their 23rd season in the top flight of Norwegian football. Stabæk finished the season in 8th position and were knocked out of the Norwegian Cup by Viking in the Fourth Round.

The 2020 season was Stabæk's 24th season in the top flight of Norwegian football.

The 2020 season was Odd's twelfth continuous season in the Eliteserien since winning the 1. divisjon in 2008.