Torajirō Imada(今田虎次郎, 1859–1940) was a Japanese police chief who became the first director of Sotojima Hoyoen, a leprosy sanatorium in Osaka, Japan from 1909 to 1926. He admitted the autonomy right of the patients' association. The Sotojima sanatorium was destroyed in Muroto Typhoon in 1934 and it was reconstructed as Oku-Komyo-En Sanatorium, Okayama Prefecture.

He was born in Okayama Prefecture in 1859. After becoming the chief of several police stations in Osaka, he became the marshal of Sonezaki Police Station, in Osaka. In 1909, he was appointed the director of the Sotojima Hoyōen Sanatorium, situated in Osaka Prefecture. He retired in April 1926 and lived in Sakai, Osaka Prefecture. After eight months, Masataka Murata became the second director of the sanatorium. He died around July 1940 in Sakai.

At the start of the sanatorium, it was a lawless area with wandering vagabonds. However, order and safety were gradually established by his efforts. The director of the sanatorium admitted that he used a free hand. With the exception of Kyushu Sanatorium, in Kumamoto, directors of leprosy sanatoria came from police, since wandering leprosy patients included criminals. However, physicians took the parts of directors later in other sanatoria. Imada exceptionally stayed as the director of the sanatorium for 17 years.

The first chief doctor of the hospital was Takekichi Sugai, who studied leprosy intensively, and wrote many papers and guided other doctors. There were about 300 leprosy patients which was the capacity of the sanatorium in one and a half years. The problems of food, drinking water, and clothing first appeared very difficult, and later stabilized. A patient recreation organization was formed at his proposal. Those who could work were paid, and farms and gardens were made. A church was established. He was an able administrator and was loved by patients. In 1919, when the patient organization wanted to withdraw their autonomy right, Imada strongly inspired the spirit of autonomy.

Imada is a Japanese surname. People with this surname include: 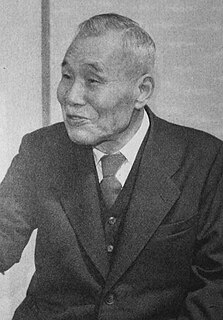 Kensuke Mitsuda was a Japanese leprologist and director of the Tama Zenshoen Sanatorium (1914–1931) and the National Sanatorium Nagashima Aiseien (1931–1957). He had been at the frontier of leprosy policy of Japan. He was given the Order of Cultural Merits (1951) and Damien-Dutton Award (1961). He has been the cause of admiration from one side, and the target of criticism from the other.

Matsuki Miyazaki was a Japanese medical doctor, the director of the Kyushu Sanatorium (1934–1958) in Kumamoto, Japan. He studied war and leprosy and found that stress was a great factor in the development of leprosy. He later established a leprosy center belonging to Japan Leprosy Mission of Asia, in India. He died in the Japan Airlines Flight 471 airplane accident in 1972.

Masako Ogawa was a Japanese doctor who worked at the Nagashima Aiseien Sanatorium. She wrote a book, "Spring in a small island" in 1938, about her experiences in persuading leprosy patients in remote areas of Japan into hospitalization. It created a sensation in Japan, and was made into a film. She was criticized for accelerating the "No leprosy patients in prefecture" movement and giving an impression that leprosy is to be feared.

Forced Hospitalization at Honmyōji, also called the Honmyōji incident, was the forced hospitalization of leprosy patients living near Honmyō-ji Temple, in the western suburbs of Kumamoto, Japan on July 9, 1940. It is regarded as an incident related to the "No Leprosy Patients in Our Prefecture Movement".

Tama Zenshōen Sanatorium, or National Sanatorium Tama Zenshōen, is a sanatorium for leprosy or ex-leprosy patients situated in Higashimurayama, Tokyo, Japan starting in 1909.

Chūjō Suketoshi was a Japanese physician, a Hansen's disease researcher, the first director of Matsuoka Hoyoen Sanatorium(1909–1947). He repeatedly reported turpentine spirit preparation he named TR as effective for leprosy.

Masayuki Kawamura was a Japanese physician who worked at Kikuchi Keifuen Sanatorium between 1909 and 1933. He was the first physician-director of the sanatorium which like other public sanitoriums would normally have been run by police officials from local stations.

Masataka Murata was a Japanese physician. He invented a Murata's method for the serodiagnosis of syphilis, and studied leprosy. He worked at the Osaka Prefectural Sotojima Sanatorium and was the director between 1926 and 1933. He treated leprosy patients as respectable persons. After the Sotojima Incident, in which communists were against religious societies, he resigned as the director of the sanatorium. Later, he personally studied leprosy at his house, and died in 1974.

Takekichi Sugai was a Japanese dermatologist. He was the first chief doctor at Sotojima Hoyoen Sanatorium (1909–1923) and wrote many papers on leprosy. Sotojima Hoyoen was a public leprosy sanatorium present in Osaka Prefecture between 1909 and 1934.

Koh Yasuda or Kō Yasuda was a Japanese ophthalmologist who became the first director of Amami Wakoen Sanatorium, a leprosy sanatorium in Amami Ōshima, Kagoshima Prefecture, Japan. He was drafted into military service and died in China in 1943.

Taiji Nojima was a Japanese dermatologist at Ooshima Seishoen Sanatorium, for 41 years, . He attended many international leprosy congresses and visited many overseas leprosy sanatoriums.

The Muraiken Undō, or No Leprosy Patients in Our Prefecture Movement, was a government funded Japanese public health and social movement which began between 1929 and 1934. Its mission was to systematically eliminate leprosy,, a readily transmissible, previously incurable, chronic infectious disease caused by M. leprae, from each prefecture in Japan. This was to be achieved by caring for those afflicted by the disease in government funded sanatoriums.