Toralf Westermoen (July 5, 1914 – May 6, 1986) was a pioneer for the development of high speed craft in Norway. Westermoen was involved in the companies Båtservice Verft, Westermoen Båtbyggeri og Mek. Verksted , Westermoen Hydrofoil and Westamarin , all situated in Mandal.

On his own initiative, Westermoen started development of ahigh speed motor-torpedo vessel early in the 1950s. The prototype, Nasty was the start of the Tjeld class patrol boat that was put into production in 1957. The top speed was around 45 knots. Jan Herman Linge was the main designer for Westermoens from 1949 to 1956.

The Nasty/Tjeld-class was in continuous production until 1970, and in addition to sales to the Norwegian navy, it was exported to Germany, Greece, Turkey and the United States.

In the period 1965 to 1970, Westermoen Hydrofoil built 6 Storm class patrol boats. The Storm class we used as the basis for the Westamaran catamaran, which was essentially a Storm-class hull divided in the middle and separated to form a much wider catamaran, suited for passenger transport.

The first generation Westamaran catamarans were not as quick as the competing hydrofoils, but their capacity was larger, maintenance easier, and they were more comfortable. The second generation catamarans, with symmetrical hulls, matched the hydrofoils in speed, reaching 35-40 knots.

Toralf Westermoen was CEO in the various companies until 1969 when he was elected to the Norwegian parliament for Kristelig Folkeparti, where he served until 1981.

The technology and heritage that Westermoen initiated, lives on in the company Umoe Mandal, who are building third generation catamaran craft that also includes SES-technology, such as the Skjold class patrol boats.

A hydrofoil is a lifting surface, or foil, that operates in water. They are similar in appearance and purpose to aerofoils used by aeroplanes. Boats that use hydrofoil technology are also simply termed hydrofoils. As a hydrofoil craft gains speed, the hydrofoils lift the boat's hull out of the water, decreasing drag and allowing greater speeds. 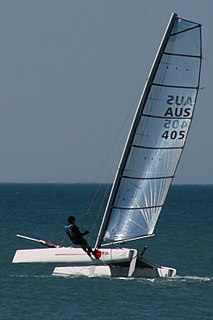 A catamaran is a multi-hulled watercraft featuring two parallel hulls of equal size. It is a geometry-stabilized craft, deriving its stability from its wide beam, rather than from a ballasted keel as with a monohull sailboat. Catamarans were invented by the Austronesian peoples which enabled their expansion to the islands of the Indian and Pacific Oceans.

Skjold-class corvettes are a class of six large, superfast, stealth missile corvettes in service with the Royal Norwegian Navy. The boats were formerly classed as MTBs but, from 2009, the Royal Norwegian Navy has described them as corvettes (korvett) because their seaworthiness is seen as comparable to corvettes, and because they do not carry torpedoes. They were built at the Umoe Mandal yard. With a maximum speed of 60 knots (110 km/h), the Skjold-class corvettes were the fastest combat ships afloat at the time of their introduction.

The Nasty type patrol boats were a series of fast patrol boats designed and built in Norway during the 1950s and 1960s for the Norwegian, and other, navies. 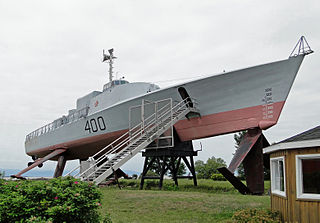 HMCS Bras d'Or was a hydrofoil that served in the Canadian Forces from 1968 to 1971. During sea trials in 1969, the vessel exceeded 63 knots, making her the fastest unarmed warship in the world at the time.

A/S Westermoen Båtbyggeri og Mek Verksted was a shipyard located in Mandal, Norway, who specialized in high speed craft. Under the leadership of Toralf Westermoen in the 1950s, the yard has produced a long range of high speed boat types, such as:

Westermoen Hydrofoil was a shipyard located in Mandal, Norway, which has specialized in high speed craft, and pioneered many designs. 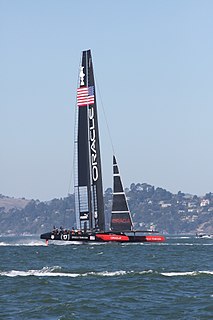 High-performance sailing is achieved with low forward surface resistance—encountered by catamarans, sailing hydrofoils, iceboats or land sailing craft—as the sailing craft obtains motive power with its sails or aerofoils at speeds that are often faster than the wind on both upwind and downwind points of sail. Faster-than-the-wind sailing means that the apparent wind angle experienced on the moving craft is always ahead of the sail. This has generated a new concept of sailing, called "apparent wind sailing", which entails a new skill set for its practitioners, including tacking on downwind points of sail.

MV Mariam is a Bolivian-flagged passenger ferry with a 228 gross tonnage (GT). Built in 1982 at Westermoen Hydrofoil shipyard, the ship is a catamaran 29.00 metres in length with a capacity of about 200 passengers. Built as Venture 84, the ship was in service with the French ferry operator Emeraude Lines from 1983 to 1996, serving a route between the Channel Islands and France. From 1996 to 2008, the ship was operated by Cypriot ferry operator Fergün Denizcilik as Fergün Express III.

HNoMS Nasty was a fast attack craft of the Royal Norwegian Navy, built as a private venture by Westermoen Båtbyggeri of Mandal, Norway. Designed by Jan Herman Linge she was an experimental craft, of wooden hull construction, launched in 1958. Nasty served with the Royal Norwegian Navy and was the prototype for the navies Tjeld class patrol boats. Boats to Nasty's design were also built for the US and German navies. Nasty was stricken in 1967.

The Nasty class of fast patrol boats were a set of 20 vessels built for the United States Navy to a Norwegian design and purchased in the 1960s for covert operations during the Vietnam War. Following the conflict they remained in service until the early 1980s.

The Greek Tjeld type patrol boats were a set of six fast patrol boats built to a Norwegian design and operated by the Hellenic Navy during the 1960s and early 1970s.

The Tjeld class was a class of twenty fast patrol boats designed and built for the Royal Norwegian Navy in the late 1950s. They were used as torpedo boats in Norway where this type of vessel were called MTBs or motor torpedo boats (motortorpedobåt). They remained in service until the late 1970s, when they were placed in reserve; all were stricken by 1995.