Toras Chaim may refer to:

Yeshiva Toras Chaim (YTC) is an all-male, Lithuanian (Litvish)-style Talmudic academy. It was founded in Denver, Colorado in 1967. It is headed by the Roshei Yeshiva, Rav Yisroel Meir Kagan, and Rav Yitzchok Wasserman, both students of Rabbi Aharon Kotler, founder and rosh yeshiva of Beth Medrash Govoha in Lakewood, New Jersey. YTC is located in the Denver West Side Jewish Community in the neighborhood of West Colfax, Denver.

Toras Chaim is a two-volume work of Hasidic discourses on the books of Genesis and Exodus by the second Chabad Rebbe, Rabbi Dovber Schneuri. The work is arranged in a similar fashion as Likutei Torah/Torah Or, a fundamental work on Chabad philosophy authored by Rabbi Dovber's father, Rabbi Shneur Zalman of Liadi, the founder of the Chabad movement. Both works are arranged according to the weekly Torah portion.

Hebron Yeshiva, also known as Yeshivas Hevron, or Knesses Yisroel, is a yeshiva devoted to high-level study of the Talmud. It originated in 1924 when the roshei yeshiva and 150 students of the Slabodka Yeshiva, known colloquially as the "mother of yeshivas", relocated to Hebron.

Sholom Dovber Schneersohn was the fifth Rebbe of the Chabad Lubavitch chasidic movement. He is known as "the Rebbe Rashab".

Yeshivas Rabbeinu Yisrael Meir HaKohen, is an Orthodox yeshiva in the United States, based in Kew Gardens Hills, Queens, New York. It is primarily an American, Lithuanian-style Talmudic yeshiva. The Yeshiva is legally titled Rabbinical Seminary of America (RSA), however it is often referred to as just Chofetz Chaim, as that was the nickname of its namesake, Yisroel Meir Kagan. The school has affiliate branches in Israel and North America.

Tomchei Temimim is the central Yeshiva of the Chabad-Lubavitch Hasidic movement. Founded in 1897 in the town of Lubavitch by Rabbi Sholom Dovber Schneersohn, it is now a worldwide network of institutions of advanced Torah study.

Eliyahu Lopian, known as Reb Elyah, was among the most prominent rabbis of the Mussar Movement. As a disciple of the Kelm Talmud Torah method, he was known for his strict keeping of order and strong self-control. It is told that he would not turn his head without a reason and a structured decision.

Mayanot Institute of Jewish Studies, is a school in Jerusalem for Jewish students aged 16–29. Classes include instruction in Jewish Mysticism, Philosophy, Talmud, Torah, Chassidut, and the Hebrew Language. The Mayanot Men's Program was founded in 1996, and the Women's Program started in 2008.

Yeshiva Toras Moshe is an English-speaking Litvish Orthodox Yeshiva in Jerusalem, Israel. Founded in 1982, it was established in Israel to cater to post-high school students from English-speaking countries. It has since graduated over 1,000 students.

Yeshivas Bais Yisroel, colloquially known as "Bais", is an English-language, Litvish Haredi yeshiva for post-high-school boys located in the Neve Yaakov neighborhood of Jerusalem, Israel. Founded in 1986 by Rabbi Doniel Lehrfeld, the yeshiva's student body currently numbers over 100 students mainly from the United States, Canada, Gibraltar and England. The yeshiva also operates a kollel for 40 married men, many of whom attended the yeshiva before marriage.

Ohr Somayach in South Africa is an affiliate of Ohr Somayach, Jerusalem, a network of Haredi yeshivas and Synagogues. Like its parent institution, it focuses on educating baal teshuvas. It has branches in Johannesburg and Cape Town.

The Rabbinical College of Pretoria is a Chabad Yeshiva in Pretoria, South Africa. It was established in 2001 under the inspiration of late Chief Rabbi Cyril Harris. The Yeshiva is headed by Rabbi Levi Wineberg, also joint Rosh Kollel of Kollel Bet Mordechai in Johannesburg, and internationally known for his annotated translation of the Tanya.

Sanhedria HaMurhevet is a Haredi neighborhood in Jerusalem. Its name translates as "expanded Sanhedria". 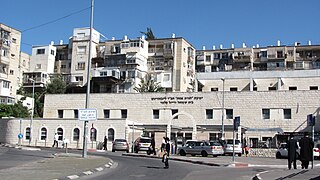 Derech Chaim is a work on the subject of repentance by the second Rebbe of the Chabad Hasidic movement, Rabbi Dovber Schneuri.