Futaro Yamada was the pen name of Seiya Yamada, a Japanese author. He was born in Yabu, Hyogo. In 1947, he wrote a mystery short story Daruma-tōge no Jiken and was awarded a prize by the magazine Houseki (宝石). He was discovered by Edogawa Rampo and became a novelist. He wrote many ninja and mystery stories. Many of his works have been adapted for film, TV, manga, and anime. 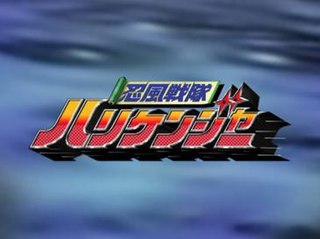 Ninpuu Sentai Hurricaneger is Toei's twenty-sixth production of the Super Sentai metaseries. The catchphrase for the series is "Unknown even to others, unknown even to the world, we become shadows to defeat evil!". Its footage was used in the American series, Power Rangers Ninja Storm. On April 1, 2013, Shun Shioya, Nao Nagasawa, Kohei Yamamoto, and Yujiro Shirakawa, who played Hurricane Red, Hurricane Blue, Hurricane Yellow, and Kabuto Raijer, respectively, announced that a 10th anniversary V-Cinema release called Ninpuu Sentai Hurricaneger: 10 Years After would be produced. This is the first time a movie has been made commemorating the anniversary of a single Sentai series. The movie is a direct to DVD and Blu-ray release. Shout! Factory released Ninpuu Sentai Hurricaneger: The Complete Series in North America on March 26, 2019. This is the twelfth Super Sentai series to be released in North America. it joined Kamen Rider Ryuki.

Basilisk is a Japanese manga series written and illustrated by Masaki Segawa. Based on the 1958 novel The Kouga Ninja Scrolls by Futaro Yamada, it was serialized in Kodansha's Young Magazine Uppers from 2003 to 2004. The story takes place in the year 1614. Two ninja clans, Iga of Tsubagakure and the Kouga of Manjidani, battle each other to determine which grandson of Tokugawa Ieyasu will become the next shogun. The deadly competition between 10 elite ninja from each clan unleashes a centuries-old hatred that threatens to destroy all hope for peace between them.

Ninja Captor is a Japanese tokusatsu TV series which aired from April 7, 1976 to January 26, 1977. It appeared on TV Tokyo, Channel 12, and was produced by Toei Company, Ltd.. Ninja Captor is similar to Toei's own Super Sentai series and aired during the run of Himitsu Sentai Gorenger.

The Kouga Ninja Scrolls is a historical fantasy novel about ninja written in 1958-1959 by the Japanese author Futaro Yamada. This is the first volume of the Ninja Scrolls series written by Yamada in 1958-2001. The book has been translated into English by Geoff Sant, and was published by Del Rey in December 2006.

The Naruto: Ninja Council series, known in Japan as Naruto: Saikyō Ninja Daikesshū, is a series of action games based on the manga and anime series Naruto by Masashi Kishimoto. They are developed by Aspect Co. and published by Tomy. Various installments of the series have appeared on both Nintendo's Game Boy Advance and Nintendo DS, the first two games in the series available for the former while the rest are available on the latter. 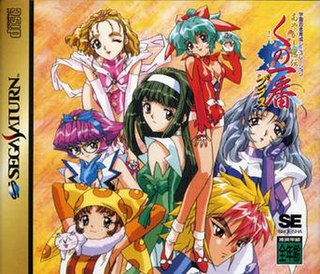 Ayakashi Ninden Kunoichiban (あやかし忍伝くの一番) is a Japanese dating sim by Shoeisha, released on March 14, 1997, for Windows 95 in Japan. A PlayStation, and Sega Saturn version were soon released as well. It is a female ninja dating sim, as well as a gal game. It is said that the lesbian elements appear to be stronger in the PlayStation version.

A kunoichi is a female ninja or practitioner of ninjutsu (ninpo). During the feudal period of Japan, ninjas were used as killers, spies and messengers. The training of kunoichi differed from the training given to male ninjas, although they had a common core of skills, being trained in martial arts, such as taijutsu and ninjutsu. Kunoichi training tended to prioritize traditional female skills.

Modern schools of ninjutsu are schools which offer instruction in martial arts. To a larger or smaller degree, the curriculum is derived from the practice of ninjutsu, the arts of the ninja; covert agents or assassins of feudal Japan. 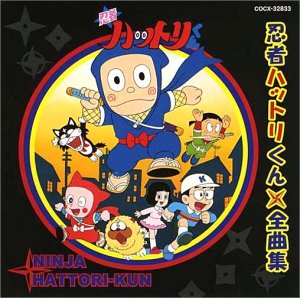 Ninja Hattori-kun (忍者ハットリくん), known as Ninja Hattori in some countries, is a Japanese manga series created by Fujiko A. Fujio which was serialized between 1964 and 1988. It was later adapted into a television drama that aired on TV Asahi from 1966 – 1968; an anime series by Shin-Ei Animation, airing on Asahi from 1981 – 1987; a video game by Hudson Soft; two anime films by Shin-Ei and a live-action film. A remake of the 1981 anime series produced by Shin-Ei and the Indian animation firms Reliance MediaWorks and later Green Gold Animations has aired since 2013. 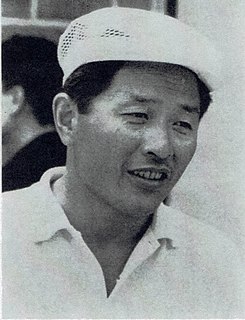 Tadashi Sawashima was a Japanese film director and theatre director. He directed films from the 1950s to the 1970s. He died on 27 January 2018 of multiple organ failure at the age of 91.

Denrinbō Raikei , also known as Benkei Musō was Chinese-born Japanese martial artist, ninja, swordsman, and Yamabushi. He belonged to Hitoyoshi Domain as ninja. He was thought to be the head of ninja group, Ura-Taisha(裏タイ捨) or Sagara-ningun(相良忍軍).

Ninja-Russia relation refers to the international relations between the Ninja, Japanese covert agents and historical Russian countries such as the Russian Empire and the Soviet Union. Russia was the first western country that ninja confronted and among the earliest countries that recognized the existence of ninja and researched them.