Torba is a sea-side village near Bodrum in the Mugla Province, Turkey.

Torba is located approximately 6 km (3.7 mi) northeast of the resort town, Bodrum. The hillsides are clad in olive groves and pine forests. The shoreline is dotted with cafes and open-air restaurants, specializing in catch-of-the-day seafood, lamb kebabs and traditional mezes (Turkish tapas). Despite some recent upmarket developments, the village has retained a relaxed, rural ambience. Because of its close proximity to Bodrum town, Torba is popular with day-trippers who come for a swim, a stroll along the idyllic shoreline or a candle-lit dinner on the beach. Hotels and all-inclusive resorts are there as well.

Some of the fish in Torba Bay include sea bass and gilt-head bream. Other marine life include sea turtles, dolphins or the rare Mediterranean monk seal.

Bodrum is a district and a port city in Muğla Province, in the southwestern Aegean Region of Turkey. It is located on the southern coast of Bodrum Peninsula, at a point that checks the entry into the Gulf of Gökova, and is also the center of the eponymous district. The city was called Halicarnassus of Caria in ancient times and was famous for housing the Mausoleum of Mausolus, one of the Seven Wonders of the Ancient World. Built by the Knights Hospitaller in the 15th century, Bodrum Castle overlooks the harbour and the marina. The castle includes a museum of underwater archaeology and hosts several cultural festivals throughout the year. The city had a population of 36,317 in 2012. It takes 50 minutes via boat to reach Kos from Bodrum, with services running multiple times a day by at least three operators. 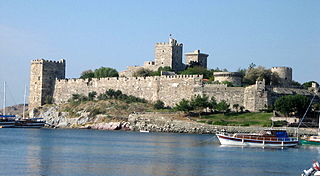 Gulf of Gökova or Gulf of Kerme, is a long (100 km), narrow gulf of the Aegean Sea between Bodrum Peninsula and Datça Peninsula in south-west Turkey.

Çatalada, a.k.a.Çatal Ada, is a Turkish island located in the Aegean Sea, 3 miles off the town Turgutreis, west of Bodrum peninsula in southwestern Turkey. An island with three conical hills, its name means literally "fork island".

Kara Ada,, is a small Turkish island at the entrance of the harbor of Bodrum in the Aegean Sea. It is a popular tourist destination, particularly for yachting.

Salih Ada is a Turkish island in the Aegean Sea, located north of Bodrum. Salih Ada is a popular tourist destination, and is accessible by boat from Bodrum. The original location of the town of Caryanda was on this island before its relocation to the mainland. Under the name Taramptos, it was a member of the Delian League and is mentioned in a tribute decree of ancient Athens dated to 425/4 BCE. It is also mentioned in an inscription recovered at Halicarnassus dated to 300 BCE.

Didim is a small town, popular seaside holiday resort, and district of Aydın Province on the Aegean coast of western Turkey, 123 km (76 mi) from the provincial capital city of Aydın. Didim is the site of the antique city of Didyma with its ruined Temple of Apollo. 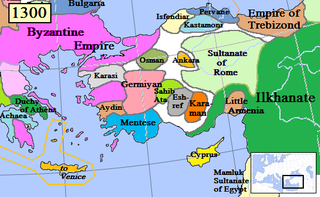 Mentese was the first of the Anatolian beyliks, the frontier principalities established by the Oghuz Turks after the decline of the Seljuk Sultanate of Rum. Founded in 1260/1290, it was named for its founder, Mentesh Bey. Its capital city was Milas (Mylasa) in southwestern Anatolia.

Surduk is a village in Serbia. It is situated in the Stara Pazova municipality, in the Srem District, Vojvodina province. The village has a Serb ethnic majority and its population numbering 1,589 people.

Türkbükü is a coastal town in Muğla Province in southwestern Turkey, located on the Turkish Riviera on the opposite side of the Bodrum peninsula from the town of Bodrum. Türkbükü has a well protected harbor ringed with high hills containing a number of luxury hotels and holiday villas. The town is situated at the ancient Greek town, Caryanda, the birthplace of the 6th-5th c. BCE Greek explorer Skylax, and currently is a favorite vacation spot and second home residency of upper-class Turks and although less well visited by Western European tourists compared to Bodrum, also increasingly popular with foreign visitors. 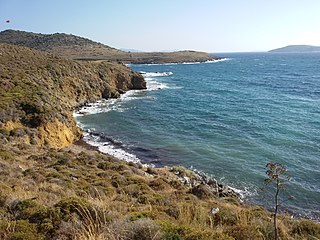 Caryanda or Karyanda was a city on the coast of ancient Caria in southwestern Anatolia. Stephanus of Byzantium describes it as a city and harbour (λίμην) near Myndus and Cos. But λιμήν, in the text of Stephanus, is an emendation or alteration: the manuscripts have λίμνη ('lake'). Strabo places Caryanda between Myndus and Bargylia, and he describes it, according to the common text, as "a lake, and island of the same name with it;" and thus the texts of Stephanus, who has got his information from Strabo, agree with the texts of Strabo. Pliny simply mentions the island Caryanda with a town; but he is in that passage only enumerating islands. In another passage he mentions Caryanda as a place on the mainland, and Pomponius Mela does also. Scylax of Caryanda, one of the most famous mariners and explorers of ancient times, was a native of Caryanda. He lived in the late 6th and early 5th centuries BCE and served the Persian king Darius I.

İncetarla is a village in the District of Ceyhan, Adana Province, Turkey.

Bitez is a town in Muğla Province, Turkey

Boğaziçi is a working fishing village on the shore of Lake Tuzla in the Milas district of Muğla Province, Turkey. Today a number of fish restaurants line the shoreline.

Uranium or Ouranion was a town of ancient Caria, on the Bodrum Peninsula. Uranium was a polis (city-state) and a member of the Delian League. Uranium appears in the Athenian tribute lists and paid an annual tribute of 17 drachmae, 1 obol.