Torben Frank (born 16 June 1968 in Copenhagen) is a Danish former footballer, who played in the striker role. He most successfully played for Danish clubs Lyngby Boldklub and Brøndby IF, and won four Danish championships. In addition, Frank received 5 international caps for the Denmark national football team and was a part of the Danish team that won the 1992 European Championship.

Frank started playing football for Vallensbæk IF. In 1986, he signed his first contract with Brøndby IF, with whom he went on to win three Danish championships. He moved to league rivals Lyngby Boldklub in January 1991. In April, he made his debut for the Danish national team, in a friendly match against Bulgaria, and was a part of the Danish championship winning Lyngby team in 1992. He was selected to represent Denmark at the 1992 UEFA European Championship, and played in two of five games, as Denmark won the tournament.

After Euro 92, Frank moved abroad to play for Olympique Lyonnais in France. He was injured during preliminary physical tests in Lyon, and never got to play for the club. Lyon wanted out of the contract, and a legal battle between club and FIFA ensued. In 1995, Frank moved on, returning to Lyngby, but never recovered his form prior to the injury. He went on to play for Boldklubben Frem in 1997, and ended his career in 1998.

Miklos Jon Molnar, nicknamed "Danish Dynamite", is a Danish former professional footballer who played as a striker for a number of Danish and foreign clubs. He was the top goalscorer of the 1989 and 1997 Danish championships, and won the 2000 MLS Cup with American team Kansas City Wizards. He scored two goals in 18 caps for the Denmark national football team, and represented his country at the 1998 World Cup and 2000 European Championship tournaments. He was also a member of the Denmark team competing at the 1992 Summer Olympics.

Mark Agner Boecking Strudal is a retired Danish footballer who played as a striker and scored three goals in nine games for the Danish national team. He became known for his extravagant lifestyle, but in later years he reentered the minds of the Danish public as the manager of FC Zulu.

Søren Larsen is a Danish retired professional football striker. He was a strong player with a decent header and good sense of positioning.

Thomas Rytter Jakobsen is a retired Danish footballer and manager, who played as a right-back. He is currently the manager of Blovstrød IF. 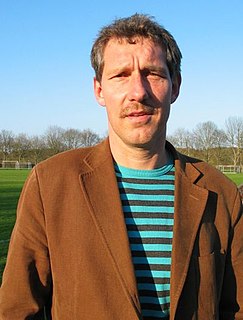 Kim Vilfort is a Danish retired footballer who played as a midfielder. He is the head talent scout at Brøndby IF.

Kim Piitala Christofte is a former Danish professional footballer, who was part of the Denmark national football team that won the 1992 European Championship. Considered an elegant sweeper, left back or midfielder, his technique allowed him a nonchalant playing style.

Klaus Berggreen is a Danish former football player, who most prominently played for Italian clubs Pisa and A.S. Roma. He played 46 matches and scored five goals for the Danish national team, and he represented his country at the 1986 World Cup and two European Championship tournaments.

John Helt is a Danish former football (soccer) player in the midfielder position.

Diego Tur is a former Danish professional footballer, who played most of his career as a central defender for F.C. Copenhagen, between 1992 and 2002. He played 18 games for various Danish youth national teams, and was awarded Danish under-17 Player of the Year in 1987. Diego Tur has a Danish mother and a Spanish father.

Kaj Frederik Christiansen was a Danish football player and manager. He began his career as an amateur player for BK Frem, winning the 1944 Danish Championship. He played professionally for French clubs Stade Français, Le Havre AC, Olympique Lyonnais, and Grenoble Foot 38, winning the 1954 French Division 2 with Olympique Lyonnais. Kaj Christiansen scored six goals in five matches for the Denmark national football team between 1943 and 1948. He was named 1943 Danish Sports Talent of the Year. As a manager, he was named 1964 Manager of the Year in France, and won the 1967 Danish Cup with Randers Freja.

Kaj Aksel Hansen was a Danish football player and manager. As an amateur player, he scored 114 goals in 202 games for B 93, and scored 12 goals in 27 games for the Denmark national football team. Hansen won five Danish football championships with B 93, and was the joint top goalscorer of the 1940 season. He was banned from Danish football in 1946, having illegally accepted payment to play. He then played professionally for French clubs Stade Francais, SR Colmar, FC Metz and CA Paris. 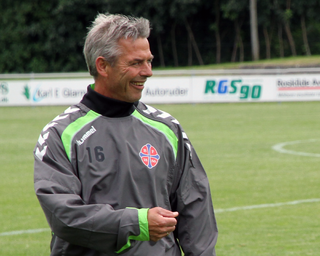 Henrik Jensen is a Danish former football player and manager. He managed Danish Superliga club Brøndby IF between 2010 and 2011, and Boldklubben Frem of the 2nd Division between 2012 and 2014.

Niels Frederiksen is a Danish football manager who is head coach at Danish Superliga club Brøndby IF. He came from a position as manager for the Denmark U21 team, and has formerly coached Lyngby Boldklub and Esbjerg fB as head coach.

Gustav Ølsted Marcussen is a Danish professional footballer who plays for Lyngby BK in the Danish Superliga.