The Torbido is a river in the Calabria region of southern Italy. It might have been the river Sagra of classical antiquity. It rises in the mountains of the Aspromonte National Park and flows in a southeastern direction. It drains into the Ionian Sea at Marina di Gioiosa Ionica after a course of 18 kilometers. It has a drainage basin of 160.3 square kilometres (61.9 sq mi). [1]

The Derby Italiano is a Group 2 flat horse race in Italy open to three-year-old thoroughbred colts and fillies. It is run at Capannelle over a distance of 2,200 metres, and it is scheduled to take place each year in May.

The Gran Premio d'Italia is a Listed flat horse race in Italy open to three-year-old thoroughbreds. It is run at Milan over a distance of 2,400 metres, and it is scheduled to take place each year in June.

Nemoli is a town and comune of 1,501 inhabitants, found in the province of Potenza, in the Southern Italian region of Basilicata. The town, positioned between the Apennine Mountains, is noted for its artisanal work, typically in wood and copper.

Monteforte d'Alpone is a comune (municipality) in the Province of Verona in the Italian region Veneto, located about 80 kilometres (50 mi) west of Venice and about 25 kilometres (16 mi) east of Verona.

Francesco Torbido was an Italian painter of the Renaissance period, active mainly in Verona and Venice. He is also known as il Moro.

Liberale da Verona (1441–1526) was an Italian painter of the Renaissance period, active mainly in Verona.

The year 1562 in art involved some significant events and new works.

Locride is an area of Calabria, Italy around the town of Locri in the Province of Reggio Calabria. The term takes origin from the Locris, an ancient Greek region.

The Battle of the Sagra was fought in the 6th century BC between the Greek cities of Locri Epizefiri and Croton. The battle took place along the Sagra river. This river cannot be precisely identified, but may be the present-day Torbido or the Allaro, in the Province of Reggio Calabria, southern Italy. 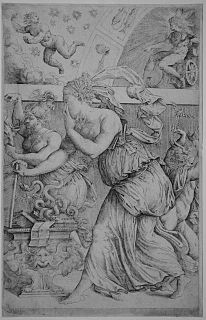 Battista del Moro was an Italian painter of the Renaissance period active in his native Verona, as well as in Mantua and Venice.

Shepherd with a flute, or Boy with a Pipe, is a painting in oil on canvas of perhaps 1510–15, in recent decades usually attributed to Titian, though in the past often to Giorgione. It is now in the Royal Collection, and in 2018 was in the King's Closet at Windsor Castle. Since at least 1983 it has been called Boy with a Pipe by the Royal Collection; previous titles the collection recognise include Shepherd with a pipe, and The Shepherd.

Orlando Flacco or Fiacco was an Italian artist.

Il Moro is Italian for "The Moor", and may refer to:

Salvatore Mannuzzu was an Italian writer, politician, and magistrate.

Il colombre is a 1966 short story collection by the Italian writer Dino Buzzati. The titular story introduces a sea monster called the colomber, which became the most famous of Buzzati's monster characters. 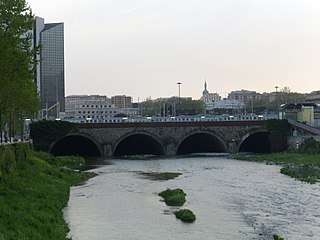