Torbjörn Törnqvist (born 1953) is a Swedish billionaire, and the CEO and co-founder of Gunvor, "one of the largest commodities conglomerates in the world", with the Russian billionaire, Gennady Timchenko. [1] [2]

In 2016, he reduced his stake in Gunvor from 78% to 70%, and received a special dividend of about $1 billion, part of which went to repay his co-founder Gennady Timchenko, who sold his 44% to Törnqvist in March 2014, a day before Timchenko was sanctioned by the US for his "close ties to Vladimir Putin". [4]

In 2017, a Swedish Radio documentary presented evidence that Gunvor had been involved in a Belarusian oil smuggling scheme under Törnqvist's watch, featuring corruption at the highest levels in the Belarus government. [5] This documentary, which includes an interview with Törnqvist, won the 2017 Prix Europa award in the "Radio Current Affairs" category. [6] Gunvor has officially denied any wrongdoing.

Törnqvist is a keen sailor, and the head of Artemis Racing, who have competed in the America’s Cup. [7] [8]

His first wife was Eva Birgitta Törnqvist. [9] His second wife is Natalia, with whom he has a son. [9] 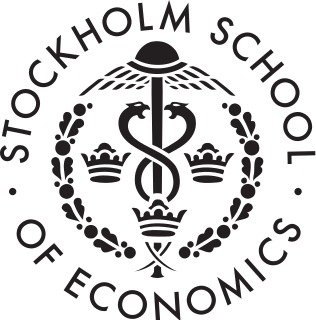 Niklas Zennström is a Swedish billionaire entrepreneur known for founding several high-profile online ventures with Janus Friis including Skype and Kazaa. He also founded the technology investment firm Atomico and has become a significant figurehead for entrepreneurs in the tech sector. Zennström is also the co-founder of the charity organization Zennström Philanthropies. 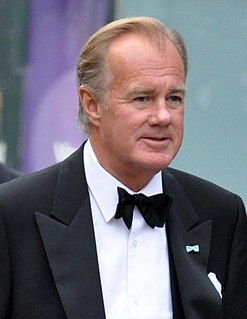 Carl Stefan Erling Persson is a Swedish billionaire businessman. In March 2013, Forbes reported Persson's net worth as $28 billion making him the richest of Sweden's 12 billionaires and the 17th richest person in the world; he has since dropped to number 50. Persson was the chairman in fashion company H&M until May 2020, when he was succeeded by his son. He remains the company's largest shareholder, owning a 36% stake. The company was founded by his father Erling Persson in 1947. 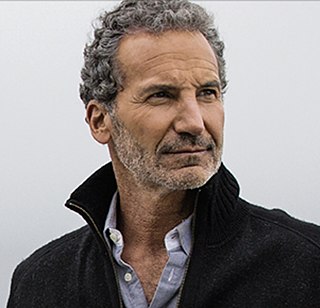 Gennady Nikolayevich Timchenko is a Russian oligarch and billionaire businessman. He founded and owns the private investment group, Volga Group, which specializes in investments in energy, transport and infrastructure assets. Previously he was a co-owner of Gunvor Group. In 2020, Timchenko was ranked 72nd on the Forbes magazine billionaires list, with an estimated fortune of US$20 billion. He is known for being the Chairman of the Board of Directors of the Kontinental Hockey League, and President of the SKA Saint Petersburg ice hockey club. He is a citizen of Russia, Finland and Armenia. He is an honorary consul of Serbia in Saint Petersburg. 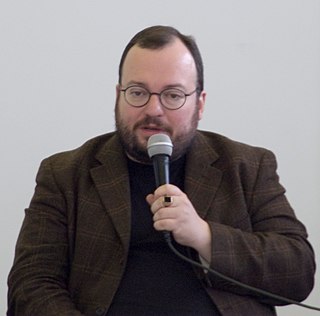 Stanislav Alexandrovich Belkovsky is a Russian political analyst and communication specialist. He is a founder and director of the National Strategy Institute. He considers himself to be of Russian, Ukrainian, Polish and Jewish ethnicity. He is best known for his theatrical demeanor, humorous comportment, and deadpan style. In interviews and public talks, Belkovsky's trademark is mixing fast-paced political discussion with almost-nonsensical, absurdist statements laced with sarcasm, calling into question how 'serious' the preceding analysis was.

Gunvor Group Ltd is a Cypriot-domiciled multinational commodity trading company registered in Cyprus, with its main trading office in Geneva, Switzerland. Gunvor also has trading offices in Singapore, the Bahamas, and Dubai, with a network of representative offices around the globe. The company operates in the trade, transport, storage and optimization of petroleum and other energy products, as well as having investments in oil terminal and port facilities. Its operations consist of securing crude oil upstream and delivering it to market via pipelines and tankers. 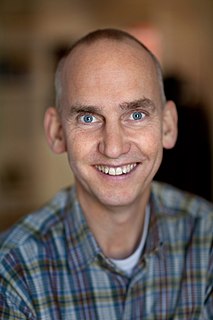 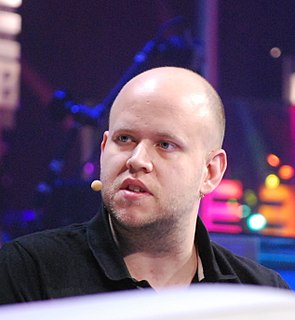 Daniel Ek is a Swedish billionaire entrepreneur and technologist. Ek is known for being the co-founder and CEO of music streaming service Spotify. 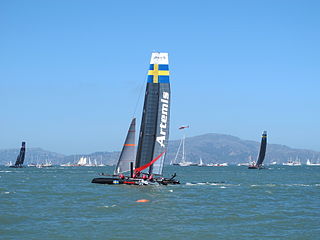 Artemis Racing is a professional sailing team founded in 2006 by businessman and sailor Torbjörn Törnqvist, named after Artemis, the ancient Greek goddess. After the 2017 America's cup with Iain Percy as CEO they changed name to Artemis Technologies. Artemis Technologies now build their boats in Port Pembroke, west Wales. 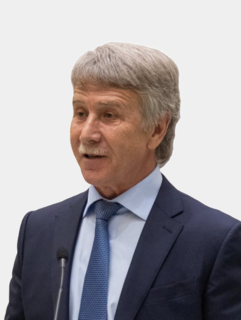 Ami Horowitz is an American documentary filmmaker and right-wing activist. He is the writer, producer, and director of Ami on the Streets, a satirical short film series made for Fox News. Horowitz co-wrote, co-directed, and starred in the 2009 documentary U.N. Me, a critical examination of the United Nations.

Yamal LNG is a joint venture based around a liquefied natural gas plant located in Sabetta at the north-east of the Yamal Peninsula, Russia. In addition to the LNG plant, the project includes production at the Yuzhno-Tambeyskoye gas field, and the transport infrastructure, including the Sabetta seaport and airport.

Volga Group is a privately held investment vehicle that manages assets on behalf of the businessman Gennady Timchenko.

Benjamin R. Pollner is an American businessman. He is the founder of Taurus Petroleum, based in Geneva, created in 1993, and remains its chairman and chief executive officer.

Kirill Nikolayevich Shamalov is a Russian businessman, the ex-husband of Katerina Tikhonova and the ex-son-in-law of the Russian President Vladimir Putin. He was the former economic advisor to the Russian government. He is a younger son of Nikolai Shamalov, a co-owner of Rossiya Bank. Shamalov is a vice-president of Sibur holding.

Konstantin Nikolaev is a billionaire Russian businessman who is a co-owner of N-Trans and Globaltrans, the largest private rail operator in Russia, CIS, and the Baltic states. He is a major investor in American Ethane and serves on its board. Late July 2018, his net worth was estimated at $1.2 billion. He allegedly is a financial supporter of Maria Butina. Through Igor Levitin, Alexey Mordashov, Arkady Rotenberg, Gennady Timchenko, and Alexander Voloshin, Konstantin Nikolaev is a partner and close associate of numerous persons in Vladimir Putin's inner circle. 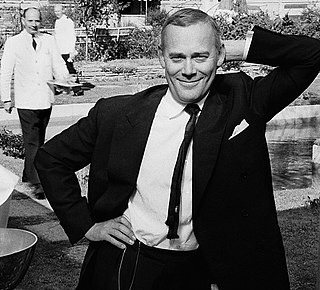 Tore Fredrik Wretman was a Swedish chef and restaurateur. Wretman is perhaps best known for introducing cooking to men in Sweden, and his work as a restaurateur founding several of Stockholm's most popular restaurants. He is also known for creating Toast Skagen.