Torbjørn Olsen (born November 10, 1953) is a Norwegian priest that on November 9, 2006 was elected Diocesan Administrator of the see of Tromsø, following the sudden death of Bishop Gerhard Goebel. He served in this position until Berislav Grgic was installed as the new Bishop of Tromso on March 28, 2009. He holds a Cand. Theol. degree from the Norwegian Menighetsfakultetet since 1977, and he worked for about a decade as a priest in the Norwegian Church, including as a military chaplain. In 1989 he converted to Catholicism. He took the diploma degree in Catholic theology at the John-Gutenberg Universität in Mainz in 1991 and was ordained a priest in Tromsø on September 8, 1991 by Bishop Gerhard Goebel. With his thesis "Die Natur des Militärordinariats", he became the first Norwegian in recent times to take a doctorate in canon law (Doctor in iure Canonico) on February 3, 1999 at the Pontifical University of Gregorian in Rome.

Olsen has worked in various functions in the Catholic Church in Norway, and in 1998 became Vicar General of Trondheim. In December 2003 he was appointed honorary chaplain to His Holiness with the title Monsignor. 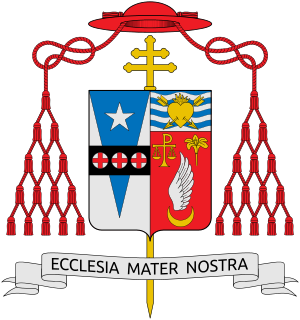 Anthony Joseph Bevilacqua was an American cardinal of the Roman Catholic Church. He served as Archbishop of Philadelphia from 1988 to 2003, having previously served as Bishop of Pittsburgh. He was created a cardinal in 1991.

Douglas Geoffrey Rowell was an Anglican bishop, who served as Bishop of Basingstoke and then as the third Bishop in Europe until his retirement on 8 November 2013. Following his retirement he ministered as an assistant bishop in the Diocese of Chichester and in the Diocese of Portsmouth. He died in the early morning of Trinity Sunday, 11 June 2017.

James Michael Moynihan was an American prelate of the Roman Catholic Church. He was the ninth Bishop of Syracuse.

The Territorial Prelature of Tromsø is a Roman Catholic territorial prelature located in the city of Tromsø in Norway. The territory is divided into 7 parishes located in the following sites: Tromsø, Bodø, Hammerfest, Harstad, Mosjøen, Narvik and Storfjord.

James Douglas Conley is an American prelate of the Catholic Church who has been the Bishop of Lincoln, Nebraska, since 2012. He was an Auxiliary Bishop in Denver from 2008 to 2012.

Patrick Ronald Cooney was an American prelate of the Roman Catholic Church. He was the third Bishop of Gaylord and held the title Bishop Emeritus in that diocese.

The parish transfers of abusive Catholic priests, also known as priest shuffling, is a pastoral practice that has greatly contributed to the aggravation of Catholic Church sexual abuse cases. Some bishops have been heavily criticized for moving offending priests from parish to parish, where they still had personal contact with children, rather than seeking to have them permanently returned to the lay state by laicization. The Church was widely criticized when it was discovered that some bishops knew about some of the alleged crimes committed, but reassigned the accused instead of seeking to have them permanently removed from the priesthood.

Ola Markus Steinholt was a Norwegian bishop in the Church of Norway.

Michael Joseph Fitzgerald is an American Roman Catholic bishop. He was appointed an auxiliary bishop of the Archdiocese of Philadelphia by Pope Benedict XVI on June 22, 2010 and consecrated on August 6, 2010.

Olav Skjevesland was a Norwegian theologian and priest. He was the Bishop of the Diocese of Agder og Telemark from 1998 until his retirement in 2012, and since that time he was a Bishop Emeritus. He was also the Preses and thus presided over the Bishops' Conference of the Church of Norway from 2006 until 2010. During his time as a bishop, he was considered to be theologically conservative and he was opposed to letting gay priests serve in the church. 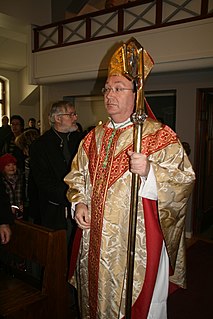 Bernt Ivar Eidsvig, known after 1991 as Markus Bernt Eidsvig, is a Norwegian prelate of the Catholic Church. He has been the Bishop of Oslo since 2005 and the Apostolic Administrator of the Roman Catholic Territorial Prelature of Trondheim from 2009 until 2019.

Olav Offer Dahl was apostolic administrator for Norway from 1928 to March 1930, when he was promoted to apostolic vicar, which he remained until his death later the same year.

Thor Scherffenberg With was a Norwegian bishop and theologian in the Church of Norway. He was bishop of the Diocese of Bjørgvin from 1977 until 1987. 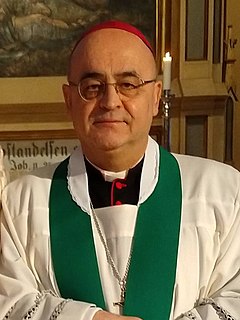 Berislav Grgić is a Bosnian Croat bishop serving in Norway as the Roman Catholic Territorial Prelate of Tromsø, the northernmost Catholic bishopric in the world. Grgić fled Bosnia and Herzegovina during the Bosnian War, arriving in Norway as a refugee and eventually becoming one of the highest-ranking officials of the Catholic Church in Norway.

Mario Eduardo Dorsonville-Rodríguez is a Colombian-born bishop of the Catholic Church in the United States. He has been an auxiliary bishop of Washington since 2015.

Timothy Edward Freyer is an American prelate of the Catholic Church and serves as auxiliary bishop for the Diocese of Orange, California.