Torbjørn Sindballe (born 21 October 1976) is a Danish professional triathlete who was forced to end his competition triathlon career due to heart problems. Torbjørn Sindballe lives in northern Sjælland with his wife Mette, and their 5-year-old son Oskar.

Thorbjørn Sindballe weighs in at 80 kg and is 190 cm tall, which is an unusual size for an elite triathlete. His size makes him less aerodynamic, heavier for running, and makes it harder for him to endure the heat, which is a strong factor in several important competitions.

He had his first career breakthrough when he won the Danish and Nordic Championships in 1998, and next year won World Championship Silver. However, his career has been plagued by injuries but he somehow has still managed a very healthy career, with many impressive results, including:

Racing in the heat

The thing that Torbjørn believes held him back from success in the Ironman Hawaii is his body's inability to handle the heat. To deal with this problem, he has developed, in cooperation with his sponsor Craft of Scandinavia, several methods to endure the heat more effectively: including running in all white, while soaked in water, as well as a glove filled with ice, to cool him down.

Torbjørn Sindballe was forced to announce end to his competitive triathlon career on 30 June 2009, due to a bicuspid aortic valve.

Katherine Jessie Jean "Kate" Allen is an Australian-Austrian triathlete. She won the gold medal in the women's triathlon at the 2004 Summer Olympics in Athens. 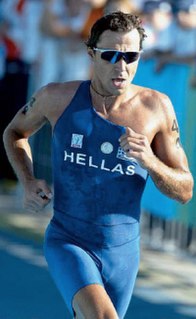 Vassilis Krommidas is a triathlete and coach from Greece best known for competing at the 2000 and 2004 Olympic Games. 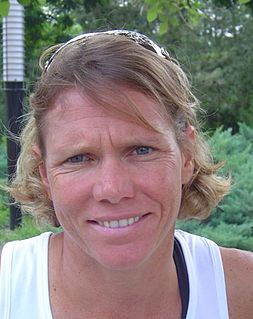 Samantha Warriner is a retired elite triathlete who represented New Zealand in triathlons ranging from sprint distance up to the Ironman distance. She was born in Alton, Hampshire, England. Samantha first turned professional at the end of 2005 after competing on the international stage for 3 years whilst also teaching full-time at Whangarei Girls High School.

Luc Van Lierde is a former athlete from Belgium, who has been competing in triathlon since 1990 and who has been a professional triathlon coach since 2009.

Sione Jongstra is a Dutch triathlete.

Spencer Smith is a British triathlete who won ITU Triathlon World Championships in 1993 and 1994.

Lisa Marangon is a Sydney, Australia based professional triathlete. 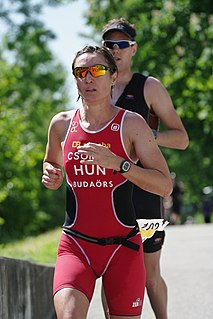 Erika Csomor is a Hungarian triathlete and duathlete. In 1998 she ran the marathon race at the European Championships, ending up in 36th place with a total time of 2:48:37.

Rutger Beke is a retired Belgian triathlete living in Leuven. Beke competed for the Uplace Pro Triathlon Team until he announced his retirement from professional triathlon on 31 May 2011.

Chris Lieto is a professional triathlete and the winner of the 2006 Ironman Japan, 2005 Ironman Canada, and 2002 Ironman Wisconsin triathlons.

Dirk Bockel is a professional triathlete originally from Schwaikheim, Germany. He holds Luxembourgish nationality and raced for Luxembourg in the 2008 Olympic Games in Beijing.

Scott Neyedli was a full-time professional Ironman triathlete (2007-2011), winning British and multiple Scottish Triathlon Championships. He is a 2 x Ironman Champion winning Ironman UK in 2007 in a marathon and course record time and Ironman Wales in 2013 with the fastest bike and marathon run splits of the day. More remarkable Scott won Ironman Wales whilst working full-time after resuming his oil and gas engineering career full-time at the start of 2012 due to sponsorship pitfalls. Scott has represented Great Britain at Elite level ITU Championships, placing Top Briton and 9th place at the ITU World Long Distance Triathlon championships in 2011 along with Top Briton placings at the World Ironman Championships in Kona Hawaii. Scott also won European Team Silver at the European Championships in 2007. Scott is still ranked one of the fastest British Ironman athletes and at the top of GB's best medal tally at Ironman Competition and still holding the current WTC Scottish Ironman record at 8hrs 17 mins 47 sec. 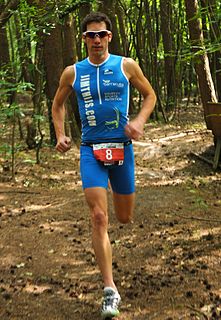 Jim Thijs is a Belgian pro triathlete. At the 2010 Xterra Triathlon World Championships, he finished 10th.

Marino Vanhoenacker is a Belgian triathlete. On 3 July 2011, he set a world best time for Ironman full distance triathlon at the Ironman Triathlon at Klagenfurt in Austria, finishing after 7 hours, 45 minutes and 58 seconds, beating Luc Van Lierde's 1997 time of 7h50m27s. His time was subsequently beaten by Lionel Sanders at Ironman Arizona in 2016; the current world best time is held by Tim Don in a time of 7 hours, 40 minutes and 23 seconds at Ironman Brazil in May 2017. 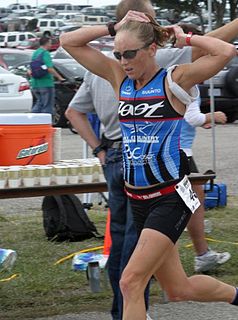 Kelly Williamson is an American triathlete who races in non-drafting, long-course events. In 2012, she took 2nd place at the Ironman 70.3 World Championship.