Torbjørn Sletta Jacobsen (born 11 August 1973 in Oslo, Norway) is a Norwegian jazz musician (saxophone) and composer. He has composed and produced music for television, radio, audio book and advertising in a variety of genres. [1]

Jacobsen is a trained musician and music teacher, as a graduate of the Rhythmic Music Conservatory in Copenhagen 1995–1999, with diploma studies (2001). [1] He has worked as a musician since the early 1990s, in a variety of contexts, based in Oslo, and also in Copenhagen. [2]

Before starting his own Torbjørn Sletta Jacobsen Quintet in 2010, Jacobsen played in the jazz quintet Lobster (2002–08). As student in Copenhagen he collaborated in a number of big and small constellations from 1995, in addition to contributions on a number of studio recordings. [1]

In addition to composing music for his quintet, he has made pieces for string quintet and percussion as accompaniment to fairy tales by H. C. Andersen (2005), background music for Marguerite Duras' "The Lover" (2005), and was the main composer and bandleader for the jazz quintet Lobster (2002–08).

As a saxophone teacher he has among other things been leader for the talent program at the Oslo Music and Culture school (OMK) from 2010, and saxophone teacher at The Waldorf College in Oslo (Oslo by Steinerskole) in the period 2005 to 2009.

Per Husby is a Norwegian jazz pianist, composer, teacher, civil engineer, and orchestra leader known for a number of recordings.

Knut Aalefjær is a Norwegian jazz musician, and composer, educated at the Norwegian Academy of Music. He is known as an eminent drummer who provide significant contributions in the Helge Lien Trio, the band Geir Lysne Listening Ensemble, with the vocalist Live Maria Roggen, the band of Kristin Asbjørnsen, and many others. 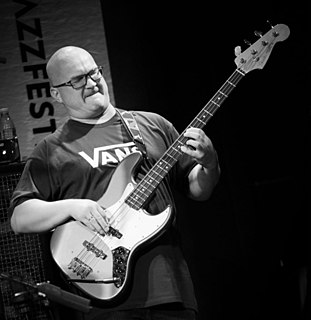 Lars Andreas Haug is a Norwegian jazz musician (tuba), known from a variety of jazz groups and recordings.

Elin Rosseland is a singer, bandleader, and composer who studied at the Norwegian Academy of Music and is known from collaborations with Vigleik Storaas, Johannes Eick, Sidsel Endresen, Eldbjørg Raknes, Christian Wallumrød, and Johannes Eick. 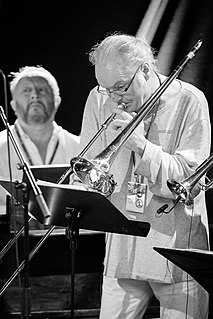 Marikens bryllup is a Norwegian comedy from 1972 directed by Knut Andersen with a script by Nicole Macé. Anne Marit Jacobsen plays the title role as Mariken, who marries Per Egil, played by Geir Børresen. The film is about the wedding and presents many family members and friends that come to the wedding.

The following is a list of notable events and releases of the year 1954 in Norwegian music.