Torcello (Latin : Torcellum; Venetian : Torceło) is a sparsely populated [1] island at the northern end of the Venetian Lagoon, in north-eastern Italy. It was first settled in the year 452 [2] and has been referred to as the parent island from which Venice was populated. It was a town with a cathedral and bishops before St Mark's Basilica was built. [3] [4]

After the downfall of the Western Roman Empire, Torcello was one of the first lagoon islands to be successively populated by those Veneti who fled the terra ferma (mainland) to take shelter from the recurring barbarian invasions, especially after Attila the Hun had destroyed the city of Altinum and all of the surrounding settlements in 452. [5] Although the hard-fought Veneto region formally belonged to the Byzantine Exarchate of Ravenna since the end of the Gothic War, it remained unsafe on account of frequent Gothic (Sarmatian) invasions and wars: during the following 200 years the Lombards and the Franks fuelled a permanent influx of sophisticated urban refugees to the island’s relative safety, including the Bishop of Altino himself. In 638, Torcello became the bishop’s official seat for more than a thousand years and the people of Altinum brought with them the relics of Saint Heliodorus, now the patron saint of the island.

Torcello benefited from and maintained close cultural and trading ties with Constantinople: however, being a rather distant outpost of the Eastern Roman Empire, it could establish de facto autonomy from the eastern capital.

Torcello rapidly grew in importance as a political and trading centre: in the 10th century it had a population often estimated at 10,000-35,000 people, with 20,000 the most commonly cited estimate. [6] However, some recent estimates by archeologists place it at closer to a maximum of 3,000. [7] In pre-Medieval times, Torcello was a much more powerful trading center than Venice. [8] Thanks to the lagoon’s salt marshes, the salines became Torcello’s economic backbone and its harbour developed quickly into an important re-export market in the profitable east-west-trade, which was largely controlled by Byzantium during that period. [5]

The Black Death devastated the Venice Republic in 1348 and again between 1575 and 1577. [9] In three years, the plague killed some 50,000 people. [10] In 1630, the Italian plague of 1629–31 killed a third of Venice's 150,000 citizens. [11] A further serious issue for Torcello specifically was that the swamp area of the lagoon around the island increased by the 14th century, partly because of the lowering of the land level. [12] Navigation in the laguna morta (dead lagoon) was impossible before long and traders ceased calling at the island. [13] The growing swamps also seriously aggravated malaria.

Torcello's numerous palazzi, its twelve parishes and its sixteen cloisters have almost disappeared since the Venetians recycled the useful building material. One small palazzo is the only remaining medieval structure, consisting of a cathedral, a church, the town's former council chamber and archives (which house the museum), and the nearby basilica and campanile; the latter two were rebuilt in the year 1008. [16]

Today's main attraction is the Cathedral of Santa Maria Assunta, founded in 639. It is of basilica-form with side aisles but no crossing, and has much 11th and 12th century Byzantine work, including mosaics (e.g. a vivid version of the Last Judgement). Other attractions include the 11th and 12th century church of Santa Fosca, in the form of a Greek cross, which is surrounded by a semi-octagonal porticus, and the Museo Provinciale di Torcello housed in two fourteenth century palaces, the Palazzo dell'Archivio and the Palazzo del Consiglio, which was once the seat of the communal government.

Another noteworthy sight for tourists is an ancient stone chair, known as Attila's Throne . It has, however, nothing to do with the king of the Huns, but may have been the podestà's or the bishop's chair, or the seat where chief magistrates were inaugurated. [17] Torcello is also home to a Devil's Bridge, known as the Ponte del Diavolo or alternatively the Ponticello del Diavolo (devil's little bridge).

Ernest Hemingway spent some time there in 1948, writing parts of Across the River and Into the Trees . The novel contains representations of Torcello and its environs. [18] In addition, numerous famous artists, musicians, and movie stars have spent time on the island, a quiet refuge. [19] Torcello is the background for Daphne du Maurier's short story Don't Look Now .

Listen to this article (5.5 megabytes)

This audio file was created from a revision of this article dated 25 November 2010 (2010-11-25), and does not reflect subsequent edits.
(Audio help  · More spoken articles)

Publius Cornelius Dolabella was a Roman general, by far the most important of the Dolabellae. He arranged for himself to be adopted by a plebeian so that he could become a plebeian tribune. He married Cicero's daughter, Tullia. Throughout his life he was an extreme profligate, something that Plutarch wrote reflected ill upon his patron Julius Caesar.

The house of de Constant de Rebecque is an ancient French noble family first attested in the 860's. After having converted to Protestantism and sided with Henri IV as high ranking officers during the Huguenot Wars, most of the family fled France for Switzerland.

Poveglia is a small island located between Venice and Lido in the Venetian Lagoon, northern Italy. A small canal divides the island into two separate parts. The island first appears in the historical record in 421, and was populated until the residents fled warfare in 1379. For more than 100 years beginning in 1776, the island was used as a quarantine station for those suffering the plague and other diseases, and later as a mental hospital. Because of this, the island is frequently featured on paranormal shows. The mental hospital closed in 1968, and the island has been vacant since.

Pavle Savić was a Serbian physicist and chemist. 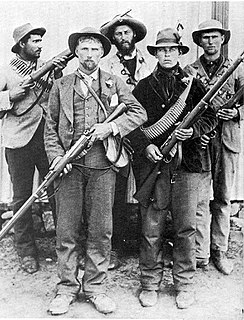 The Boer commandos or "Kommandos" were volunteer military units of guerilla militia organized by the Boer people of South Africa. The term came into English usage during the Second Boer War of 1899-1902.

Philippine "Betty" Amann was a German-American film actress. Born to American parents in Germany, she began her acting career in the United States with the film The Kick-Off (1926). She is perhaps best known for her role in Asphalt (1929).

Cape Smyth is the southern extremity of Sturge Island in the Balleny Islands. In 1841, Captain James C. Ross, viewing Sturge Island from a considerable distance, thought it a group of three islands. He named the southernmost "Smyth Island" for his friend Captain William Henry Smyth, Royal Navy, President of the Royal Astronomical Society. Ross' error was discovered in 1904 by Captain Robert F. Scott, who applied the name to the southernmost point on Sturge Island.

Janet Daley is an American-born conservative journalist living and working in Britain. She is currently a columnist for The Sunday Telegraph.

Operation Dezful was fought in early stage of the Iran–Iraq War on 15 October 1980 as Iranian tank brigades from the 16th Qazvin, 77th Khorasan, and 92nd Khuzestan armoured divisions attacked Iraqi positions. The Iranian Army's aim was to stop Iraqis progress in Iranian territories and to push them back, or stall their progress. However, Iraqi forces counterattacked from the flanks, and repulsed the Iranian forces. The Iranian retreat was blamed on poor decision making, the purge of army commanders due to their participation in Nojeh coup plot, and underestimating fire power of Iraqi forces and they were forced to retreat to the eastern shores of Karkheh River west of Dezful.

Sayreville Station is a neighborhood in Sayreville in Middlesex County, New Jersey, United States. Originally terminus of Raritan River Railroad's Sayreville Branch between Upper and Lower Sayreville. The spur was abandoned in 1978.

Devir (Turkish) Dawr دور (arabic). Is a concept in Alevism translated as cycle. It is the cycle to perfection. It is described by many alevi saints and poets as Devriye. This concept goes together with Tenasuh (turkish) Tanasukh التَّنَاسُخ (arabic) meaning reincarnation and Tekâmül (Turkish) takāmul تكامل (Arabic) meaning spiritual evolution. It is often described with concepts as Wahdat al-Wujud and Wahdat al-mawjud. There are two sides to creation, one from a spiritual centre to plurality, another from plurality to the spiritual centre. When somebody dies in the Alevi community the dede en people from the community say: devri daim olsun (turkish) meaning may his/her cycle be complete.

La Dinastía de Tuzantla, Michoacán, or simply La Dinastía de Tuzantla, is a Tierra Caliente band from Tuzantla, Michoacán, Mexico that was founded in 1987. It was created by the Toledo family, who are also members of the group. Their 2005 live production, En Vivo, landed the number seven spot on Billboard's Regional Mexican charts; it eventually peaked at number seven on the Hot Latin Albums chart.

Albro Lyons Sr. was a New Yorker of mixed heritage who advocated for educational opportunities and worked to free slaves. There is a double ambrotype of he and his wife. His daughter Maritcha Remond Lyons wrote a memoir about the family.

Uroš Stefanović Nestorović also known as Uroš Stefan Nestorović was a writer, jurist, philosopher, and pedagogue who headed all Eastern Orthodox schools in the Habsburg Monarchy. Uroš Nestorović is considered one of the most prominent Serbian enlighteners and educators of the first half of the 19th century.

Dimitrije P. Tirol is a Serbian writer, linguist, geographer, painter who lived and worked in Austro-Hungary and Serbia. 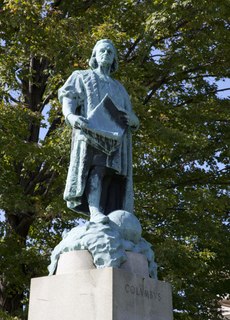 The Hartford, Connecticut statue of Christopher Columbus is eight-foot tall bronze sculpture installed on Columbus Green, near Bushnell Park. The statue is by the artist Vincenzo Miserendino.

Muong ethnic religion is an ethnic religion, among the Muong, in Vietnam. It is polytheistic, sharing many supernatural beings with Vietnamese folk religion. This ethnic religion has the lunar new year as main religious festival, including ancestor veneration.