Torch is based on the Chromium source code [6] and is compatible with all add-ons and extensions available in the Chrome store. On June 18, 2013, Torch announced that it had surpassed 10 million active users. [7]

Torrent site The Pirate Bay has run paid endorsements for Torch on their website. [8]

On February 26, 2014, Torch version 29.0.0.6508 was released. The release included the ability to customize the look and feel of users' Facebook pages using pre-set themes. Users can customize these themes or create their own. A user's customized page is visible to him/herself and to anyone visiting the original user's page from another Torch browser if the original user allows it. [13]

On May 20, 2014, Torch version 33.0.0.6975 was released. The release updated the Chromium engine used by Torch and introduced an embedded player to stream torrents downloaded before the download is completed.

Reviews of Torch have evolved over time, as the browser continued to add features and functionality. Early versions of the browser have received mixed reviews, with some praising its interesting feature combination while others pointed to the lack of add-on support (an issue which has been resolved in newer versions). [9] [6]

In October 2012, The Blog Herald said of Torch: "The Torch Web Browser is built on a lightweight framework that offers what appears to be decent security. If you like to browse the web while grabbing various files this might be the perfect browser for your arsenal of web applications. Overall I have been pleased with the Torch Browser and I only hope it continues to grow so more social sharing features can be experienced and more files can be grabbed." [9]

In reviewing Torch in December 2012, CNET said of Torch 2.0.0.1614: "An all-in-one Web browser is nothing to sneeze at, but Torch Browser isn't going to pry you away from Chrome or Firefox. While it has options that make sharing and social media a breeze, Torch Browser just isn't unique enough to win people's hearts. It lags in performance and its major features aren't worth making the switch...Torch Browser tries to carve out its niche by being an all-in-one Web browser... However, it doesn't do any of those things well enough to replace what you currently use. Once you get over the novelty, it becomes obvious that Torch Browser isn't that powerful as a Web portal. It's noticeably slower than other browsers and it doesn't have the same sort of add-on support. The layout is just a rip-off of the open-canvas setup of other, more popular browsers. None of this is to say that using it is all a bad experience. Torch Browser still runs circles around Internet Explorer and would be a major upgrade there... While not a threat to Firefox or Chrome, Torch Browser is easy enough to use and might just impress Internet Explorer users. Heavy downloaders might enjoy the torrent downloader and media player that come with it, too." [6]

PC Advisor , in an April 2013 review of the newest version, gave Torch 3.5/5 stars and praised it: "This is a great alternative browser that adds some interesting extras on top of the Chrome engine. It’s well worth trying out". [14]

In a March 2015 Techradar review by Jamie Hinks, the publication called Torch 39 "an excellent alternative for anyone looking to a browser that breaks away from the norm". [15]

Torch Media receives payments from companies like Ask.com to bundle potentially unwanted programs with the browser. Users may be asked to install search toolbars or adware programs during installation. These bundled programs commonly do one or more of the following things:

While this practice is deemed controversial by some, users are given a chance to opt out of sponsored software and Torch claims to work fine without it. [16]

Torch makes contradictory claims about the software they bundle. Their online troubleshooter claims that "Torch does not install additional toolbars" while at the same time stating that "the Torch installer may include an optional Ask.com toolbar" on another page. [17]

Mozilla Firefox, or simply Firefox, is a free and open-source web browser developed by the Mozilla Foundation and its subsidiary, the Mozilla Corporation. Firefox uses the Gecko layout engine to render web pages, which implements current and anticipated web standards. In 2017, Firefox began incorporating new technology under the code name Quantum to promote parallelism and a more intuitive user interface. Firefox is officially available for Windows 7 or newer, macOS, and Linux. Its unofficial ports are available for various Unix and Unix-like operating systems including FreeBSD, OpenBSD, NetBSD, illumos, and Solaris Unix. Firefox is also available for Android and iOS. However, the iOS version uses the WebKit layout engine instead of Gecko due to platform limitations, as with all other iOS web browsers. An optimized version of Firefox is also available on the Amazon Fire TV, as one of the two main browsers available with Amazon's Silk Browser.

A browser war is competition for dominance in the usage share of web browsers. The "First Browser War" during the late 1990s pitted Microsoft's Internet Explorer against Netscape's Navigator. Browser wars continued with the decline of Internet Explorer's market share and the popularity of other browsers including Firefox, Google Chrome, Safari, and Opera. 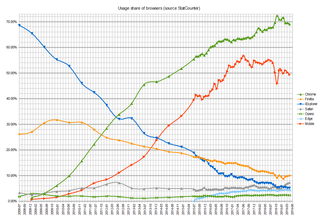 Add-on is the Mozilla term for software modules that can be added to the Firefox web browser and related applications. There are three types: extensions, themes, and plug-ins. Mozilla hosts them on its official add-on website.

Miro was an audio, video player and Internet television application developed by the Participatory Culture Foundation. It runs on Microsoft Windows, macOS, FreeBSD and Linux and supports most known video file formats. It offers both audio and video, some in HD quality. 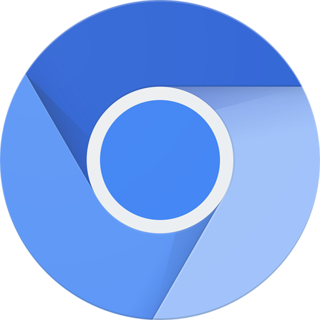 Chromium is a free and open-source software project from Google. The source code can be compiled into a web browser.

The HTML5 specification introduced the video element for the purpose of playing videos, partially replacing the object element. HTML5 video is intended by its creators to become the new standard way to show video on the web, instead of the previous de facto standard of using the proprietary Adobe Flash plugin, though early adoption was hampered by lack of agreement as to which video coding formats and audio coding formats should be supported in web browsers. As of 2020, HTML5 video is the only widely supported video playback technology in modern browsers, with the Flash plugin being phased out.

Blink is a browser engine. It is developed as part of the Chromium project with contributions from Google, Facebook, Microsoft, Opera Software, Adobe Systems, Intel, IBM, Samsung, and others. It was first announced in April 2013.

Cốc Cốc browser is a freeware web browser focused on the Vietnamese market, developed by Vietnamese company Cốc Cốc and based on Chromium open source code, which is the same platform used by Google Chrome, Microsoft Edge, Opera, and Comodo Dragon. Cốc Cốc is available for the Windows, Windows Phone and macOS operating systems and supports both English and Vietnamese. Cốc Cốc also has a search engine called Cốc Cốc Search Engine

Microsoft Edge is a cross-platform web browser developed by Microsoft. It was first released for Windows 10 and Xbox One in 2015, then for Android and iOS in 2017, for macOS in 2019, and as a preview for Linux in October 2020.

Vivaldi is a freeware, cross-platform web browser developed by Vivaldi Technologies, a company founded by Tatsuki Tomita and Jon Stephenson von Tetzchner, who was the co-founder and CEO of Opera Software. Vivaldi was officially launched on April 6, 2016.

Citrio is a free web browser developed by Catalina Group Ltd. and distributed by Epom Ad Server. Citrio is available for Windows and Mac OS X. Citrio has a download manager that includes Bittorrent support, a video downloader, a media player and a proxy switcher. Citrio is based on the open source Chromium web browser project, which makes it compatible with all extensions, apps and themes from Chrome Web Store.

RealDownloader is a freemium download manager by RealNetworks that downloads embedded Internet videos in multiple formats including MOV and FLV from sites such as YouTube, CollegeHumor, Facebook, Funny or Die and Dailymotion. This software utility lets users share downloaded videos on social networks and transfer them to their mobile devices. CNET reviewed it on July 19, 2011 and gave it a 4.5 / 5 rating.