The Torcida Jovem [2] (Portuguese pronunciation:  [toʁˈsidɐ ˈʒɔvẽ] ) are a torcida organizada , [3] or supporters' group, for Santos FC , a Brazilian professional football club based in Santos, Brazil. [4] Founded in 1969 by a group of fans from São Paulo, [nb 1] the group set out to make it a goal to attend every match that the club played in the capital of São Paulo. [6] With over 70,000 members, it is one of the largest supporting groups in Brazil. [7] The current president is André Vinícius "Deko". [1] Grêmio Recreativo Cultural Social Escola de Samba Torcida Jovem, popularly known simply as Torcida Jovem, is a samba school from São Paulo, Brazil.

During the late 1960s when Santos FC fan base did not extend beyond the limits of the city of Santos, a group of men made a point to attend every game the team played in São Paulo. [6] After a few matches, the group began to arrange together trips to any state venue to popularize the idea o support the club, and negate the provocations of other rival fans. [6] The habit of attending the club's matches en masse became so common that in 1969 they decided to give birth to a uniformed, official supporters group that attended every game the team disputes. [6] Thirteen individuals were the driving force behind the creation of Torcida Jovem, [8] with Cosmo Damião, German, Toboggan, Menezes, Celso Jatene, Mestre Pedrão, China, Chacrinha, Magrão, Zuca, Almir and Zé Miguel being the principal de facto leaders. [6] On September 26, 1969, when the club returned from another successful tour, unbeaten in a series of seven matches in Europe, the group gathered in an old house in the traditional neighborhood of Brás in São Paulo. [6] It was decided to name the group Torcida Jovem since the founders were no older than 21 years of age. Cosmo's house became the first official seat of the first organized supporters group for Santos FC . [6] The firm's first witness of the club's success came on November 19 of that same year in Rio de Janeiro. [6] In a match against Vasco da Gama, Pelé, [9] named the "Athlete of the Century" by the International Olympic Committee, [10] and widely regarded among football historians, former players and fans to be one of the best and most accomplished footballers in the game's history. [11] [12] [13] [14] [15] [16] [17] [18] [19] scored his 1,000th goal in the Maracanã. The following year, the Torcida Jovem made themselves present during Brazil's victorious campaign during the 1970 FIFA World Cup. [6] [20] [21] [22] [23]

The Carnival of Brazil is an annual Brazilian festival held the Friday afternoon before Ash Wednesday at noon, which marks the beginning of Lent, the forty-day period before Easter. During Lent, Roman Catholics and some other Christians traditionally abstained from the consumption of meat and poultry, hence the term "carnival", from carnelevare, "to remove meat." 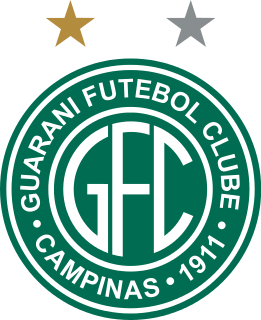 Guarani Futebol Clube, commonly referred to as simply Guarani, is a Brazilian association football club in Campinas, São Paulo. Guarani is the only club from the interior of Brazil to have won the first division of the Brazilian Championship. They currently play in the Série B, the second tier of Brazilian football, as well as in the Campeonato Paulista Série A1, the top tier of the São Paulo state football league.

A samba school is a dancing, marching, and drumming club. They practice and often perform in a huge square-compounds and are devoted to practicing and exhibiting samba, an African-Brazilian dance and drumming style. Although the word "school" is in the name, samba schools do not offer instruction. Samba schools have a strong community basis and are traditionally associated with a particular neighborhood. They are often seen to affirm the cultural validity of the Afro-Brazilian heritage in contrast to the mainstream education system, and have evolved often in contrast to authoritarian development. The phrase "escola de samba" is popularly held to derive from the schoolyard location of the first group's early rehearsals. In Rio de Janeiro especially, they are mostly associated with poor neighborhoods ("favelas"). Samba and the samba school can be deeply interwoven with the daily lives of the shanty-town dwellers. Throughout the year the samba schools have various happenings and events, most important of which are rehearsals for the main event which is the yearly carnival parade. Each of the main schools spend many months each year designing the theme, holding a competition for their song, building the floats and rehearsing. It is overseen by a carnavalesco or carnival director. From 2005, some fourteen of the top samba schools in Rio have used a specially designed warehouse complex, the size of ten football pitches, called Samba City to build and house the elaborate floats. Each school's parade may consist of about 3,000 performers or more, and the preparations, especially producing the many different costumes, provide work for thousands of the poorest in Brazilian society. The resulting competition is a major economic and media event, with tens of thousands in the live audience and screened live to millions across South America. 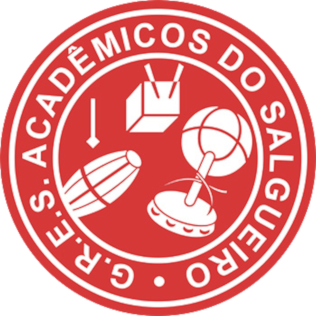 Grêmio Recreativo Escola de Samba Acadêmicos do Salgueiro, popularly known simply as Salgueiro is a popular samba school from Rio de Janeiro, Brazil. It was established on March 5, 1953 from the merger of Morro do Salgueiro's two samba schools called Azul e Branco do Salgueiro and Depois Eu Digo, which then merged again with Unidos do Salgueiro. It first paraded in 1954 with the Romaria à Bahia samba. The school's motto is "Not better, nor worse, just a different school". 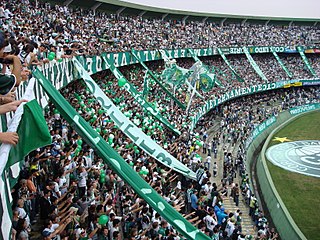 Torcidas organizadas are formal associations of football fans in Brazil in the same vein as barras bravas in Brazil itself and the rest of Latin America, hooligan firms in United Kingdom and ultras in the rest of Europe, Asia, Australia and North Africa.

Samba-enredo, also known as samba de enredo, is a sub-genre of modern samba made specifically by a samba school for the festivities of Brazilian Carnival. It is a samba style that consists of a lyric and a melody created from a summary of the theme chosen as the plot of a samba school.

Carnival blocks, carnaval blocos or blocos de rua are street bands that mobilize crowds on the streets and are the main popular expression of Brazilian Carnival. These parades fall under the term "street carnival", and happen during a period of about one month, beginning before and finishing after Carnival. Carnaval blocos usually perform samba music all around Brazil, but other popular musical styles are present in specific regions, including frevo and maracatu in Pernambuco and axé in Bahia.

The Grêmio Recreativo Escola de Samba Portela is one of the most traditional samba schools of the city of Rio de Janeiro, and champion of the 2017 Carnival parade. It is the greatest winner of the top-tier Rio parade with 22 titles in total.

The Polo Cultural e Esportivo Grande Otelo, commonly known as Anhembi Sambadrome, is a Sambadrome and one of the largest outdoor venues for major events in the city of São Paulo in Brazil. It opened in 1991, and has a capacity of 103,200 people. It hosts around 30 events per year, including the São Paulo carnival, Independence Day celebrations, and music events.

The Grêmio Recreativo Escola de Samba União da Ilha do Governador was founded on March 7, 1953 by the friends Maurício Gazelle, and Quincas Orphylo, who were in Cacuia, the main site of the carnival parade of the Ilha do Governador, watching the presentation of small schools of samba and blocks of various districts of the island. It was then decided that the neighborhood of Cacuia should be represented by a samba school. Currently, the school is based in Estrada do Galeão in the neighborhood of Cacuia.

Grêmio Recreativo Escola de Samba Unidos de Vila Isabel is a samba school in Rio de Janeiro. It was thrice champion of the Special Group and is currently headquartered in Boulevard 28 de Setembro in Vila Isabel.

Jair Rodrigues de Oliveira was a Brazilian musician and singer. He is the father of Luciana Mello and Jair Oliveira, who also followed in his footsteps and became musicians.

Santos FC is a football club based in Santos, that competes in the Campeonato Paulista, São Paulo's state league, and the Campeonato Brasileiro Série A or Brasileirão, Brazil's national league. The club was founded in 1912 by the initiative of three sports enthusiasts from Santos by the names of Raimundo Marques, Mário Ferraz de Campos, and Argemiro de Souza Júnior, and played its first friendly match on June 23, 1914. Initially Santos played against other local clubs in the city and state championships, but in 1959 the club became one of the founding members of the Taça Brasil, Brazil's first truly national league. As of 2010, Santos is one of only five clubs never to have been relegated from the top level of Brazilian football, the others being São Paulo, Flamengo, Internacional and Cruzeiro.

Andrea de Andrade is a Brazilian Carnival Queen. She began performing in samba parades in 2006 with Mocidade, a samba school in Rio de Janeiro. In 2010 she won the "Rainha da bateria" of Mocidade and in 2011 led the parade of this school at the Rio de Janeiro carnival. 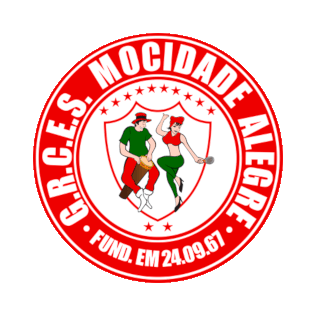 Grêmio Recreativo Cultural Social Escola de Samba Vai-Vai, popularly known simply as Vai-Vai is a samba school from São Paulo, Brazil. At the beginning of the 20th century, there were in the neighborhood Bixiga, at Rua Marques Lion, a football team called Cai-Cai which used the colors black and white, which formed part of a group of crying and played in the field of Lusitana, near the intersection of rock and Una, Saracura River region. Around 1928 a group of friends, led by Livinho and Benedito Sardinha helped to animate the games and parties performed by the Cai-Cai, but were always seen as freeloaders and troublemakers, being called jokingly as "the Vae-Vae gang." Expelled from the Cai-Cai, they created the "Pack of the Tattered", and in parallel, the Vae-Vae Carnival and Sports Cord, which was formalized in 1930.

The Carnival of São Paulo is a major Brazilian Carnival. It takes place in the Anhembi Sambadrome of São Paulo on the Friday and Saturday night of the week of Carnival.