Carlism is a Traditionalist and Legitimist political movement in Spain aimed at establishing an alternative branch of the Bourbon dynasty – one descended from Don Carlos, Count of Molina (1788–1855) – on the Spanish throne.

The Carlist Wars were a series of civil wars that took place in Spain during the 19th century. The contenders fought to establish their claim to the throne, although some political differences also existed. Indeed, several times during the period from 1833 to 1876 the Carlists — followers of Infante Carlos and his descendants — rallied to the cry of "God, Country, and King" and fought for the cause of Spanish tradition against liberalism, and later the republicanism, of the Spanish governments of the day. The Carlist Wars had a strong regional component, given that the new order called into question region–specific law arrangements and customs kept for centuries. 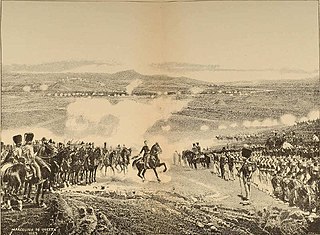 The First Carlist War was a civil war in Spain from 1833 to 1840, the first of three Carlist Wars. It was fought between two factions over the succession to the throne and the nature of the Spanish monarchy: the conservative supporters of the late king's brother, Carlos de Borbón, became known as Carlists (carlistas), while the progressive supporters of the regent, Maria Christina, acting for Isabella II of Spain, were called Liberals (liberales), cristinos or isabelinos. Aside from being a war of succession about the question who the rightful successor to king Ferdinand VII of Spain was, the Carlists’ goal was the return to an absolute monarchy, while the Liberals sought to defend the constitutional monarchy. Portugal, France and the United Kingdom supported the regency, and sent volunteer and even regular forces to confront the Carlist army.

Marcha de Oriamendi, is the anthem of the Carlist movement. The name of the anthem stems from the Battle of Oriamendi which took place in 1837 during the First Carlist War.

Xavier, Duke of Parma and Piacenza, known in France before 1974 as Prince Xavier de Bourbon-Parme, known in Spain as Francisco Javier de Borbón-Parma y de Braganza or simply as Don Javier, was the head of the ducal House of Bourbon-Parma and Carlist pretender to the throne of Spain.

DomSebastian Gabriel of Bourbon and Braganza, Infante of Portugal and Spain, was an Iberian prince of the 19th century, progenitor of the Spanish ducal lines of Hernani, Ansola, Dúrcal and Marchena, and Carlist army commander in the First Carlist War.

The Requetés, also called boinas rojas, were members of the Carlist organization Requeté. As an organisation it operated between the mid-1900s and the early 1970s, though exact dates are not clear.

Archduke Karl Pius of Austria, Prince Royal of Hungary and Bohemia, Prince of Tuscany, called Carlos Pío de Habsburgo-Lorena y de Borbón in Spain, was a member of the Tuscan branch of the Imperial House of Habsburg and a Carlist claimant to the throne of Spain under the assumed name of "Carlos VIII". He was the tenth and youngest child of Archduke Leopold Salvator, Prince of Tuscany and Infanta Blanca of Spain.

José Enrique Varela Iglesias, 1st Marquis of San Fernando de Varela was a Spanish military officer noted for his role as a Nationalist commander in the Spanish Civil War. 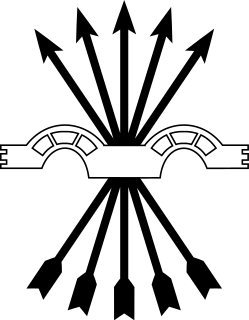 The Falange Española Tradicionalista y de las Juntas de Ofensiva Nacional Sindicalista was the sole legal party of the Francoist regime in Spain. It was created by General Francisco Franco in 1937 as merger of the monarchist neoabsolutist, ultracatholic Carlist Traditionalist Communion with the Fascist Falange Española de las JONS. Besides the resemblance of names, the party formally retained most of the platform of FE de las JONS and a similar inner structure. In force until April 1977, it was rebranded as Movimiento Nacional in 1958.

The Arrow of Gold is a novel by Joseph Conrad, published in 1919. It was originally titled "The Laugh" and published serially in Lloyd's Magazine from December 1918 to February 1920. The story is set in Marseille in the 1870s during the Third Carlist War. The characters of the novel are supporters of the Spanish Pretender Carlos, Duke of Madrid. Curiously, the novel features a person referred to as "Lord X", whose activities as arms smuggler resemble those of the Carlist politician Tirso de Olazábal y Lardizábal, Count of Arbelaiz.

Emilio Terrero y Perinat (1827–1890) was a 33rd degree Mason who became the Governor-General of the Philippines from 1885 to 1888. He was renowned for his campaign against the Moros in Mindanao. 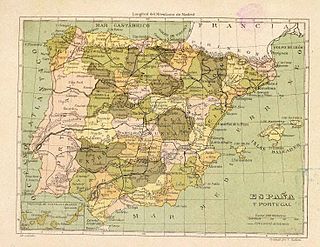 Electoral Carlism of Restoration was vital to sustain Traditionalism in the period between the Third Carlist War and the Primo de Rivera dictatorship. Carlism, defeated in 1876, during the Restauración period recalibrated its focus from military action to political means and media campaigns. Accommodating themselves to political framework of the Alfonsine monarchy, the movement leaders considered elections, and especially elections to Congreso de los Diputados, primary vehicle of political mobilization. Though Carlist minority in the Cortes remained marginal and its impact on national politics was negligible, electoral campaigns were key to sustain the party until it regained momentum during the Second Spanish Republic.

Tomás Domínguez Arévalo, 6th Count of Rodezno, 12th Marquis of San Martin (1882–1952) was a Spanish Carlist and Francoist politician. He is known mostly as the first Francoist Minister of Justice (1938–1939). He is also recognised for his key role in negotiating Carlist access to the coup of July 1936 and in emergence of carlo-francoism, the branch of Carlism which actively engaged in the Francoist regime.

Melchor Ferrer Dalmau (1888–1965) was a Spanish historian and a Carlist militant. He is known mostly as principal author of a massive, 30-volume series titled Historia del tradicionalismo español, considered fundamental work of reference for any student of Carlism. Ferrer is recognized also as "periodista" (journalist), chief editor of a national and a few local traditionalist dailies and contributor to a number of others. Politically he maintained a low profile, though periodically he was member of the party executive, and during internal party strife of the early 1960s his support might have tipped the balance in favor of the progressist faction.