Kalmar County is a county or län in southern Sweden. It borders the counties of Kronoberg, Jönköping, Blekinge and Östergötland. To the east in the Baltic Sea is the island Gotland.

From 1976 until his death, Johansson was married to Helene Eriksson (born 1955). He died in Jönköping Sofia Järstorp, Jönköping County in October 2015. 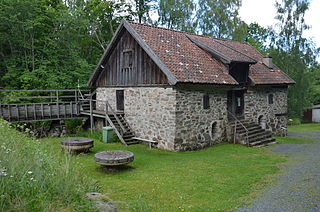 Jönköping County is a county or län in southern Sweden. It borders the counties of Halland, Västra Götaland, Östergötland, Kalmar and Kronoberg. The total county population was 356,291 inhabitants in September 2017. The capital and largest city is Jönköping. About one quarter of the total county population lives in the combined Jönköping-Huskvarna urban area around the southern point of Lake Vättern. 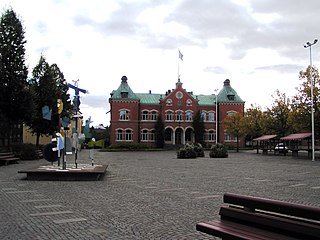 Värnamo is a locality and the seat of Värnamo Municipality, Jönköping County, Sweden, with 18,696 inhabitants in 2010.

DreamHack is a Swedish production company specializing in eSports tournaments and other gaming conventions. It is recognized by the Guinness Book of Records and Twin Galaxies as being the world's largest LAN party and computer festival with the world's fastest Internet connection, and the most generated traffic. The Internet connection record was beaten in 2012 by the second largest computer festival in the world, The Gathering in Norway. Since 2015, it is part of digital entertainment company Modern Times Group. It usually holds its events in Western Europe and North America.

Dagens Industri is a financial newspaper in tabloid format published in Stockholm, Sweden.

Grimaldi Industri AB of Stockholm, Sweden, is a holding company that owns:

Jönköpings Södra IF, also known as J-Södra IF, J-Södra or simply Jönköping, is a Swedish football club based in Jönköping. The club, founded in 1922, returned to the Swedish second division Superettan in 2018 after relegation from the 2017 Allsvenskan. J-Södra has played a total of twelve Allsvenskan seasons previously, with the most successful finish being runner-up in 1950 and their last spell ending in 2017. The club is affiliated to the Smålands Fotbollförbund.

Lars-Olof Johansson is best known as a member of the alternative rock band The Cardigans. Johansson's role in the band is keyboardist and guitarist. Johansson grew up in the Swedish town of Jönköping. He is also a member of acoustic/country band Up The Mountain. 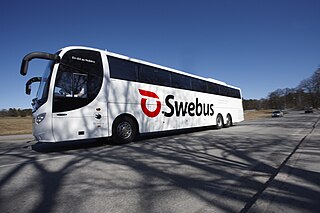 Swebus Express AB, trading as just Swebus since 2009, is one of Sweden's largest long distance coach operators. Swebus has a "seat guarantee" for journeys bought at least 24 hours before departure, meaning that they promise to bring in the necessary extra coaches in case of extensive booking on a departure. 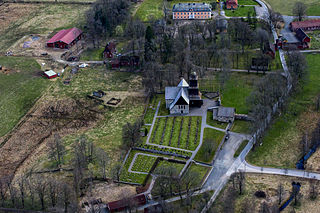 Nydala Abbey was a Cistercian monastery in the province of Småland, Sweden, near the lake Rusken. Although the abbey ceased to operate in the 16th century, its church was renovated and converted into a Protestant church during the 17th century and is still in use. The church belongs to the Church of Sweden and is part of the Diocese of Växjö.

The Swedish Alliance Mission, SAM, is a Christian denomination in Sweden, mainly based in the town of Jönköping. In 2009 the denomination had 13,448 members spread among 167 Swedish congregations and congregations outside Sweden.

Ann-Charlotte Acko Linnea Cecilia Ankarberg Johansson is a Swedish politician who has been Member of the Riksdag since September 2018. She was previously party secretary of the Christian Democrats from December 2010 to September 2018.

Mats Anders Green is a Swedish politician of the Moderate Party. He has been Member of the Riksdag since the 2014 general election, representing his home constituency Jönköping County. He served as Mayor of Jönköping from 2011 to 2014.

Sotiris Delis is a Swedish politician of the Moderate Party. He was Member of the Riksdag from the 2014 general election to the 2018 general election, representing his home constituency Jönköping County. He is a banker by profession. 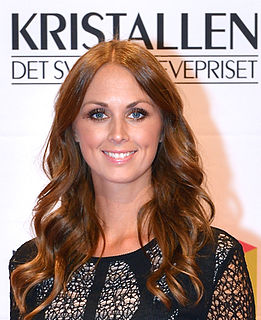 Karin Anna Maria Frick is a Swedish sports journalist and television presenter at Kanal 5 and TV4.

Bo Jimmy Thelin is a Swedish football manager and former player. He is the manager of IF Elfsborg in Allsvenskan.

Stenkumla is a populated area, a socken, on the Swedish island of Gotland. It comprises the same area as the administrative Stenkumla District, established on 1 January 2016.

Marko Johansson is a Swedish footballer of Macedonian origin who plays as a goalkeeper for GAIS, on loan from Malmö FF.