Tord Gösta Magnuson (born 7 April 1941) is a Swedish business executive and the consul general for Mauritius. He is married to Princess Christina of Sweden, the youngest of the older sisters of King Carl XVI Gustaf. With the deaths of John Ambler in 2008, Prince Johann Georg of Hohenzollern in 2016 and Baron Niclas Silfverschiöld in 2017, Magnuson is the only living brother-in-law of Carl XVI Gustaf.

Magnuson is the son of Lennart Magnuson (MSE) and his wife Gerda (born Klemming), the grandson of the Swedish chemist Gunnar Magnuson and great-grandson of Swedish politician Tord Magnuson.

Magnuson graduated as reserve officer in 1963 and graduated with a B.Sc. from Stockholm University in 1967. During his career he has been working at Stockholms Enskilda Bank, at Sandvik Steel Inc. in New York City, at Kayel AB, as well as having been CEO of Devisa AB. He is representative of Air Mauritius in Sweden and Commander 1st Class of the Royal Order of Vasa. [1]

Magnuson and his wife first met in 1961. They married on 15 June 1974. As a result of her constitutionally unapproved marriage to Magnuson, she lost her style of Royal Highness and received the courtesy title of Princess Christina, Mrs. Magnuson. They have three sons: Carl Gustaf Victor (b. 1975), an economist; Tord Oscar Frederik (born 1977), an eyewear designer; and Victor Edmund Lennart (born 1980), a game designer.

Victoria, Crown Princess of Sweden, Duchess of Västergötland is the heir apparent to the Swedish throne, as the eldest child of King Carl XVI Gustaf. If she ascends to the throne as expected, she would be Sweden's fourth queen regnant and the first since 1720. 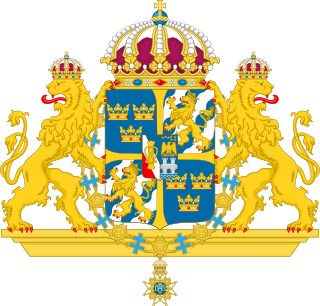 Queen Silvia of Sweden is the spouse of King Carl XVI Gustaf and mother of the heir apparent to the throne, Crown Princess Victoria. In 2011, Silvia became the longest-serving Queen of Sweden, a record previously held by Sophia of Nassau.

Ingrid of Sweden was Queen of Denmark from 1947 until 1972 as the wife of King Frederick IX.

Prince Carl Philip of Sweden, Duke of Värmland, is the only son and the second of three children of King Carl XVI Gustaf and Queen Silvia. As of 2016, Prince Carl Philip is fourth in the line of succession, after his older sister, Crown Princess Victoria, his niece and goddaughter Princess Estelle, and his nephew Prince Oscar. He lives with his wife, Princess Sofia, and two sons, Prince Alexander and Prince Gabriel, in Villa Solbacken in central Stockholm.

Princess Madeleine of Sweden, Duchess of Hälsingland and Gästrikland, is the second daughter and youngest child of King Carl XVI Gustaf and Queen Silvia. Upon her birth, she was third in line of succession to the Swedish throne. She is currently seventh in the line of succession. Princess Madeleine is married to British-American financier Christopher O'Neill. They have three children, Princess Leonore, Prince Nicolas and Princess Adrienne.

Prince Bertil, Duke of Halland, was a member of the Swedish royal family. He was the third son of King Gustaf VI Adolf and his first wife, Princess Margaret of Connaught, as well as the uncle of King Carl XVI Gustaf of Sweden, Queen Margrethe II of Denmark and Queen Anne-Marie of Greece. From 1973 to 1979 he was heir presumptive to his nephew King Carl XVI Gustaf and the Swedish throne.

The Swedish royal family since 1818 has consisted of a number of persons in the Swedish Royal House of Bernadotte, closely related to the King of Sweden. Today those who are recognized by the government are entitled to royal titles and styles, and perform official engagements and ceremonial duties of state. The extended family of the King consists of other close relatives who are not royal and thus do not represent the country officially.

Princess Lilian of Sweden, Duchess of Halland, was a Welsh fashion model who became a member of the Swedish royal family through her 1976 marriage to Prince Bertil, Duke of Halland (1912–1997). As such, she was a paternal aunt of King Carl XVI Gustaf of Sweden and a maternal aunt of Queen Margrethe II of Denmark and Queen Anne-Marie of Greece.

Princess Birgitta of Sweden, Princess of Hohenzollern is an elder sister of King Carl XVI Gustaf. 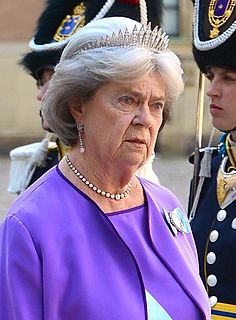 A royal family order is a decoration conferred by the head of a royal family to their female relations. Such an order is considered more of a personal memento than a state decoration, although it may be worn during official state occasions.

Prince Daniel, Duke of Västergötland, is a member of the Swedish royal family. Prior to his marriage to the heir apparent, Crown Princess Victoria, Daniel was a personal trainer and gym owner and ran a company called Balance Training with three gyms in central Stockholm.

Prince Gustaf Adolf Oscar Fredrik Arthur Edmund, Duke of Västerbotten was a Swedish prince, who for most of his life was second in the line of succession to the Swedish throne. He was the eldest son of Gustaf VI Adolf, who was crown prince for most of his son's life and ascended the Swedish throne three years after his son's death. The current king, Carl XVI Gustaf, is Prince Gustaf Adolf's son. The prince was killed on 26 January 1947 in an airplane crash at Kastrup Airport, Copenhagen, Denmark.

The Royal Chapel is a church inside Stockholm Palace. It was opened in 1754.

The wedding of Carl XVI Gustaf, King of Sweden, and Miss Silvia Sommerlath took place on Friday, 19 June 1976 at Storkyrkan. It was the first marriage of a reigning Swedish monarch since 1797.